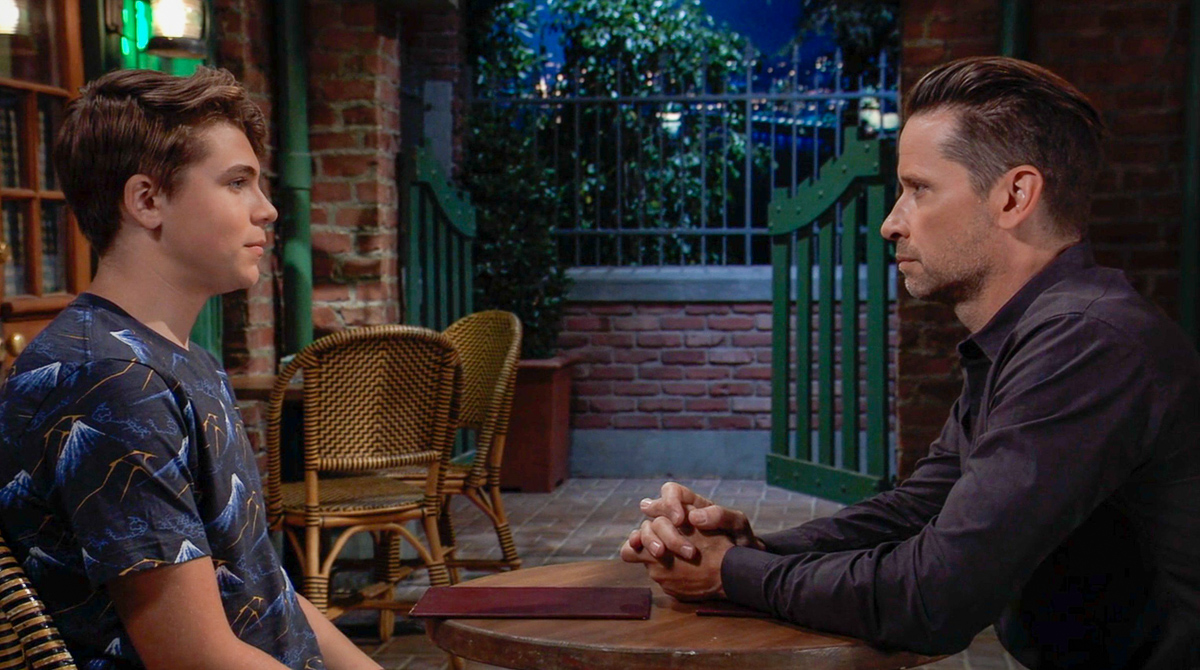 General Hospital spoilers tease that Cameron Webber (William Lipton) is going to be Scott Baldwin’s (Kin Shriner) secret weapon in the upcoming hearing where it will be decided if Franco Baldwin (Roger Howarth) will have a chance to come back as Franco through Dr. Andre Maddox (Anthony Montgomery) having a chance to reverse the memory transplant. This, or if he will remain “Frankendrew” with pre-2012 Andrew Cain’s (Steve Burton) memories and personality! Scott plans his strategy in this new General Hospital sneak peek called “Scott’s Secret Weapon.” Here’s what you need to know.

Cameron Webber walks in on Scott and his mom, Elizabeth Webber Baldwin (Rebecca Herbst) in a strategy planning meeting for the upcoming hearing. Cameron offers to testify for Franco, and Liz asks him if he’s sure, since she knows that he has had his doubts in the past about how she’s dealing with the situation. He responds by telling her he has no doubts about how much she loves Franco, and Cameron doesn’t want her to do this alone. He remembers how Franco used to tell him that in times of trouble, to look to her for clarity, because that’s what he did. Scott chimes in, stammering a bit as he remembers that’s his kid – hip and cool, and then he gets – and his voice trails off a bit.

Scott tells Cameron, listen – he’s going to put him up on the stand and he will have to testify – then Scott makes sure it’s okay with Liz. She agrees. Scott continues that he doesn’t know yet who his opposing attorney will be, who will represent Franco, Drew, or whoever, but he does know that he will grill Cameron on his relationship with Franco, putting the emphasis on the word “grill!”

Cameron tells Scott that’s fine – it won’t be the first time Franco’s put him in a tough spot! He admits that Franco and he haven’t always gotten along but that they were just starting to when the memory transfer took place. Cameron notes that Franco was his savior – and that Franco had looked directly into his eyes and told him to tell his mom, Liz, that he would be back! Scotty tells him that’s great – it’s really good!

Cameron continues, describing the scene as Franco’s memories were being replaced with Drew’s. He tells Scott he was standing directly over him during the procedure, and was looking into his eyes while he was watching him disappear – and that he was the last one to see Franco at all. Scott then starts building his court strategy, and tells Cameron first of all he will detail how Franco came to his rescue, how Franco knew about the risks to his mind, his memories, his life, and how he knew that all that would be gone once Drew’s memories replaced them.

Scott also says he will tell how Franco was so brave to take Cameron’s place. Then he will get Cameron up on the stand, and Scott will paint a picture of an empty warehouse, a mad scientist, a cult leader, and a gurney, with Camerom hooked up to all kinds of machines, and wires and electrodes, and electrical currents – Cameron interrupts and says he can tell them how terrified he was and how he didn’t know if he was going to be hurt or killed. Scott says great, great, great.

Then Cam starts talking about how Shiloh Archer (Coby Ryan McLaughlin) and that scientist guy (Dr. Arthur Cabot, played by Time Winters) drugged him up and he was out of it – Scott then interrupts. He asks if they knew that he was drugged up and Cameron says he doesn’t think so. Scott advises him not to talk about the drugged up part – it could harm his credibility as a witness. Liz interrupts and asks what if they ask about it? Scott says then they’ll have to cook up something so they will have an answer. Cameron asks if that means they’re going to make something up. Scotty says, no – and tells Cam he will tell the truth, the whole truth – and that’s where they’re going to win and it’s going to hurt them.

Scott then says they will paint this picture of Franco as a hero; that he put his life on the line to save Cameron’s. Cameron told Scott he makes it sound so dramatic, but that is exactly what happened. Scott replies, telling Cameron “Well good – that’s what we’re going to argue – that he chose to give up his life for yours, and that he wants to come back and he deserves every opportunity to do that!”