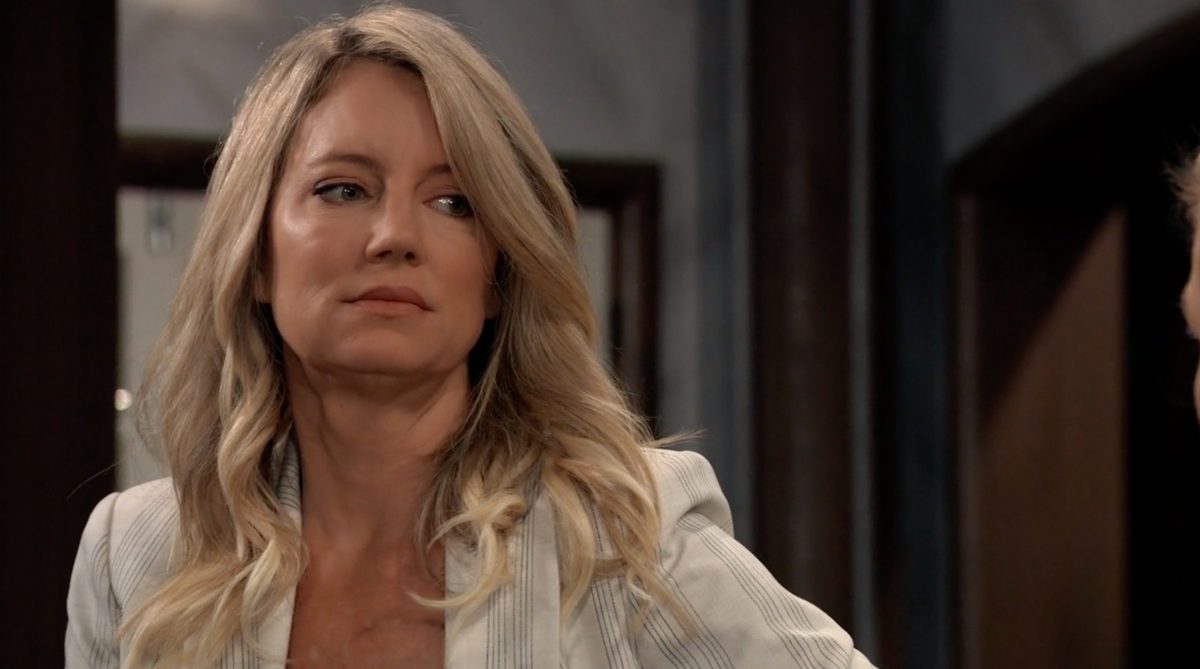 General Hospital (GH) spoilers for Tuesday, October 15, tease that Hamilton Finn (Michael Easton) will continue to worry about Hayden Barnes’ (Rebecca Budig) deception. After he runs into Alexis Davis (Nancy Lee Grahn), Finn will admit that Hayden’s lying to him. He’ll want to get to the bottom of things, but Alexis will likely advise against it. She may warn Finn that taking a step backward can sometimes end in disaster.

Even so, Finn won’t be able to get Hayden’s lies off his mind. He’ll grow increasingly determined to seek the truth – and GH fans know just how shocking it is! Finn has no idea that Hayden’s baby survived and grew into a sweet little girl. He’ll have a chance to meet his daughter down the road, so stay tuned.

At Wyndemere, Nina Reeves (Cynthia Watros) will want to hear Valentin Cassadine’s (James Patrick Stuart) side of the story. She’ll bring Valentin up to speed on Sasha Gilmore’s (Sofia Mattsson) claims and wonder if they’re accurate. Nina will push Valentin to be honest with her for once. She may suggest that if Sasha’s telling the truth and his hands are clean, she needs Valentin to say it himself.

General Hospital Spoilers: Robert Overhears An Unsettling Conversation –Is It About Peter?

Since Valentin lies as easily as he breathes and desperately wants Nina back, he may have no problem doing that. As for Liesl Obrecht (Kathleen Gati), she’ll turn her attention to Peter August (Wes Ramsey) on Tuesday. Liesl will want to get a few things straight with Peter – most likely about his treatment of Maxie Jones (Kirsten Storms) and James West.

GH Spoilers– Carly Corthinos Has A Chat With Jasper Jacks!

Dr. O wants to watch out for the family Nathan West (Ryan Paevey) left behind, so she’ll make that clear to Peter. She might contend that if Peter dares to harm Maxie or James, he’ll have to answer to her. Peter won’t seem scared by Liesl’s threat, but she’ll fire back that he should be. Liesl will insist she won’t hesitate to take drastic action, but Peter may remain convinced he’s untouchable.

Other General Hospital spoilers say Carly Corinthos (Laura Wright) will have a chat with Jasper “Jax” Jacks (Ingo Rademacher). As happy as Carly is over her new daughter, she can’t help but think about the son she lost. Carly will tell Jax that if she hadn’t gone back to Sonny Corinthos (Maurice Benard), Morgan Corinthos (Bryan Craig) would still be alive.

GH spoilers say Jax will offer Carly a pep talk. Dwelling on the past doesn’t do any good, so Jax will want Carly to focus on the positives. She’s got a beautiful little girl she adores, and Morgan would undoubtedly love her, too. Sonny will be sure of that as he talks to Morgan in the cemetery. He’ll tell his son he misses him and gushes about how much Morgan would adore Donna Corinthos.

At the police station, Diane Miller (Carolyn Hennesy) will try to fight the charges against Sam McCall (Kelly Monaco), but it doesn’t look like she’ll get anywhere just yet. Jason Morgan (Steve Burton) will be outraged over Sam’s arrest and impending transfer to Pentonville. He’ll promise to get Sam off the hook, and we all know Jason’s a man who keeps his promises!