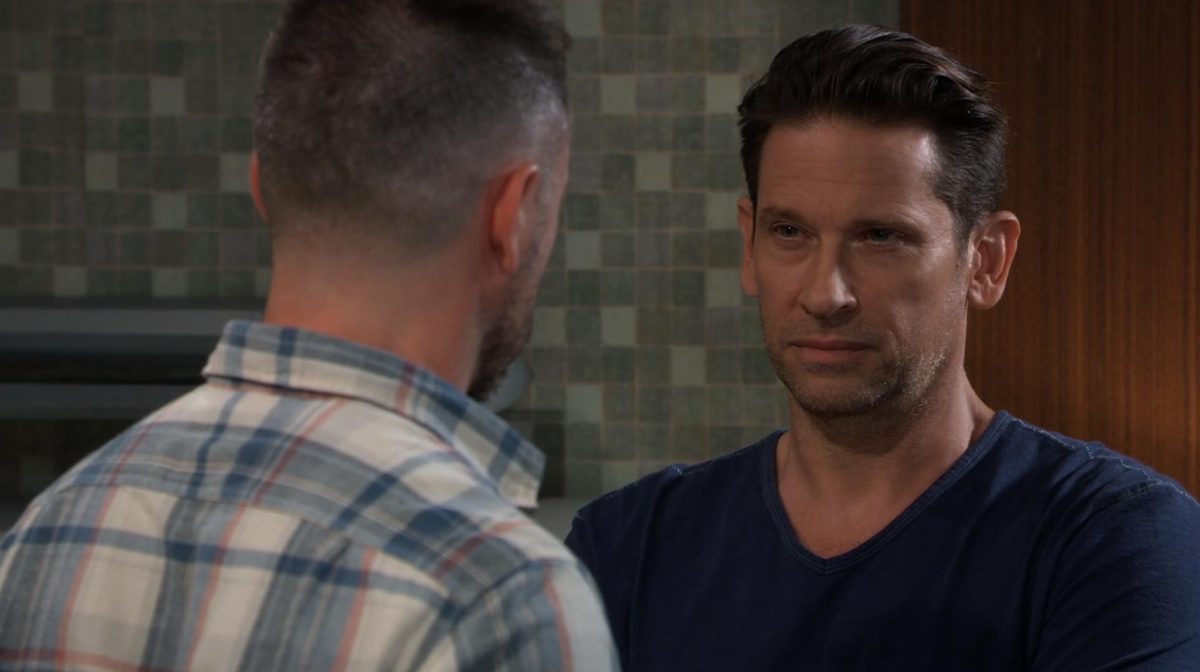 Liesl doesn’t want to leave Port Charles. Liesl says Valentin owes her the truth. Valentin says according to Madeline Reeves (Donna Mills) Nina Reeves’s (Cynthia Watros) child survived but he can’t find her. Valentin believes Madeline lied about the baby. Valentin explains that he found Nina a daughter that would make her happy.

Valentin was trying to spare Nina more harm, or so he thought. Liesl tells Valentin that the fact that you can do something, doesn’t mean you should. Valentin asks when Liesl is leaving, she isn’t sure. Valentin and Liesl have respect for each other. Valentin thinks running off is predictable. Valentin wishes Liesl good luck, they shake on the departure.

Maxie wishes Nina had come to her. Maxie asks Nina if she’s ok, she is trying to be. Nina is mad at Valentin and Sasha Gilmore (Sofia Mattsson). Nina is mad at herself. Maxie offers to go pick up her stuff at Windemere. Maxie tells Nina that Valentin is lying like he always does. Maxie doesn’t believe that Valentin is innocent. Nina explains that Liesl was holding something else over Valentin. Nina threatens to call the cops on Sasha. Maxie turns it back on Valentin. Nina explains to Maxie that she doesn’t know everything.

Peter asks if Andre can make Franco himself again. Peter continues to question Andrew who accuses him of pumping him for information. Peter claims that Faison is to blame for everything. Peter excuses himself and thanks Andre for meeting with him. Peter goes to see Maxie who talks about Nina not seeing Valentin as the liar he is. Nina comes to speak to Valentin.

General Hospital’s Roz goes to the PCPD and tells him the rest of the story he is supposed to tell the cops. Roz says her client is ready to make a statement if there is a deal on the table. Bryce claims Sam wanted Shiloh free so she could kill him. The FBI wants to over a deal, Jordan argues. The FBI says it warrants further investigation.

Sam says its nothing she didn’t already know, this just makes it final. Sam cries over Drew. Jason understands Sam being upset over Drew’s death. Sam questions how to tell Scout that she lost her father. Jason doesn’t think the plane crashed by accident. Jordan calls Sam in for more questions. Sam and Jason arrive at the PCPD. Jason sees the hitman and something seems to interest him.

Jason steps out to call Andre to show him a picture of the hitman. Sam assures Jason she will be alright. Jason shows Andre the picture and tells him that he is the guy who stabbed him. Sam tells the FBI agent she’s not answering any questions without her lawyer. The FBI agent arrests Sam and wants her remanded to Pentonville.

General Hospital’s Carly is upset about Drew. Sonny assures Carly that Drew knew they cared. Sonny tells Carly that Scout will have everyone to help her. Sonny goes to see if the baby is awake so Carly can hold her. Carly and Sonny visit with the baby. Carly tells the baby she gets to come home soon.

General Hospital’s Kim Nero (Tamara Braun) and Liz Baldwin (Rebecca Herbst) run into each other at the hospital. Kim questions Liz’s decision to have Franco Baldwin (Roger Howarth) committed. Liz is furious that Kim is bankrolling Franco’s lawyer. Liz brings up Kim denying Oscar Nero (Garren Stitt) his right to make his decisions. Liz apologizes for bringing up Oscar. Kim mentions the summons from Scott. Liz tells Kim to look inside herself. Kim stops by to give Franco his court date.

General Hospital’s Julian Jerome (William DeVry) shows up to see Franco. Franco would buy Julian a drink but they only have juice there. Julian would knock Franco out if he wasn’t locked up. Julian tells Franco this love story is just in his head. Liz complains about Franco’s lawyer. Kim tells Liz she put Franco in touch with Martin Grey (Michael E. Knight).

Julian claims to know Kim better than Franco. Julian tells Franco that Kim has been through hell and doesn’t deserve to be dragged into a past that never was. Julian says things with Kim are over. Julian tells Franco Kim needs help and he is preventing her from moving forward. Liz joins Julian and tells him Franco’s trial starts next week.