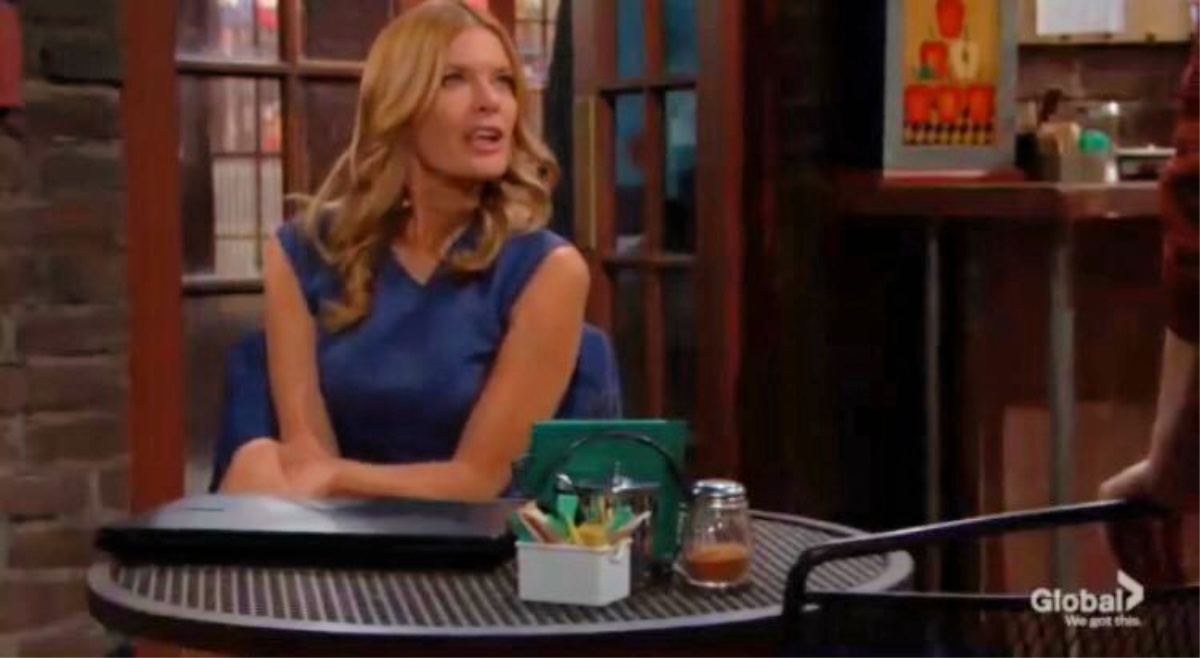 he Young and the Restless (Y&R)  spoilers for Tuesday, October 15, tease that Phyllis Summers (Michelle Stafford) will be back in Genoa City, but she’ll remain curious about Cane Ashby’s (Daniel Goddard) mission. At Crimson Lights, Phyllis makes calls on the patio. She poses various people connected to Cane, but she doesn’t get any good leads on his whereabouts.

At home, Nick Newman (Joshua Morrow) and Chelsea Newman (Melissa Claire Egan) are concerned about Connor Newman (Judah Mackey), who claims he shattered his lamp by mistake. Summer Newman (Hunter King) arrives in time to hear Chelsea beating herself up. She insists Chelsea’s not to blame before the grateful mom takes off.

That leaves Summer to vent to Nick. She mentions Phyllis went MIA again and talks about sparring with Theo Vanderway (Tyler Johnson). Summer suggests Jabot is the one place where she can make herself useful. At Kyle Abbott (Michael Mealor) and Lola Abbott’s (Sasha Calle) apartment, they gush over a pic of Lola’s new nephew. After admiring Mateo, they use an app to see what their own kid might look like and laugh over the prediction.

The conversation shifts to Jabot, which leads Kyle to suggest Lola doesn’t get it. He doesn’t think she can understand having to prove herself to her family – not like he and Summer can. Talk turns to Theo, which brings Lola’s admission about him passing out. Kyle’s upset that Lola didn’t bring it up sooner.

Lola wonders if Kyle trusts her, but he fires back that it’s Theo he doesn’t trust. Their bickering escalates as Lola snaps that she’s not naïve. She thought Theo’s effort to make things right seemed genuine. Kyle shouts that Lola should stay away from Theo and leaves in a huff.

At Devon Hamilton’s (Bryton James) penthouse, he discusses Tucker McCall (Stephen Nichols) with Elena Dawson (Brytni Sarpy). Devon spoke with Tucker’s assistant, who revealed some strange behavior. Tucker decided to go on a spiritual journey after deciding technology had too many negative effects. Since Tucker’s company is on the verge of disaster now, Devon’s stressed and uneasy about the whole thing. Elena thinks she can cheer Devon up with a surprise later that evening.

Young & Restless Spoilers– Connor Newman Is Out Of Control!

In the meantime, Devon catches up with Nick at the coffeehouse. He wants to double his New Hope contribution and adds that the will can’t be legally contested. Next, Nikki Newman (Melissa Claire Egan) and Sharon Newman (Sharon Case) join them. There’s eventually a conversation about Nick running for office, but he’s called back to the house to help Chelsea with Connor.

Back at Nick’s house, faces Connor’s wrath. Connor rants about Nick not being his real father before snapping that Chelsea’s a liar. Once Connor insists he wants his dad, Chelsea realizes she needs to do something.

At Crimson Lights again, Sharon assures Phyllis she’s not interested in her latest plot. Phyllis hints that it involves Adam and needles Sharon a bit. Sharon argues that Adam leaving didn’t affect her life. She feels like Phyllis must be projecting her Adam abandonment issues onto her, but Phyllis insists Adam did no such thing. She admits she just saw him before Sharon gets a call from Chelsea.

Once Chelsea explains, Sharon confesses she doesn’t know how to get in touch with Adam, but she knows someone who can help. A little later, Sharon grills Phyllis about why she didn’t just remain in Vegas. Phyllis insists she’s not through with Genoa City, so Sharon wonders if that means Adam is.

Next, Adam looks at his phone and sees that Chelsea’s trying to reach him. He lets it go to voicemail, which brings Chelsea’s message about Connor needing his dad. Adam gives Riza Thompson a call instead of checking his messages. He tells Riza he’s in Vegas to stay and adds that there’s nothing left for him in GC.

At the Grand Phoenix, Elena finally treats Devon to his surprise. They head to a suite, where Elena’s got a recording of a jazz festival Devon missed. Devon kisses Elena to show his appreciation. Over with Summer again, she gets a visit from Theo at Jabot. He concedes he was a jerk before and wants to do better.

Summer rants about Theo blaming others for his own shortcomings. Theo ultimately suggests that he had to fight for what he wants in life. He used his ego since he didn’t have much else to work with. Theo is apologetic about going too far at times, and he wants to make some changes.

The Young and the Restless spoilers say some hot drama’s ahead, so don’t miss all the action. We’ll give you updates as other Y&R news and rumors emerge. Stay tuned to see what’s ahead in Genoa City.