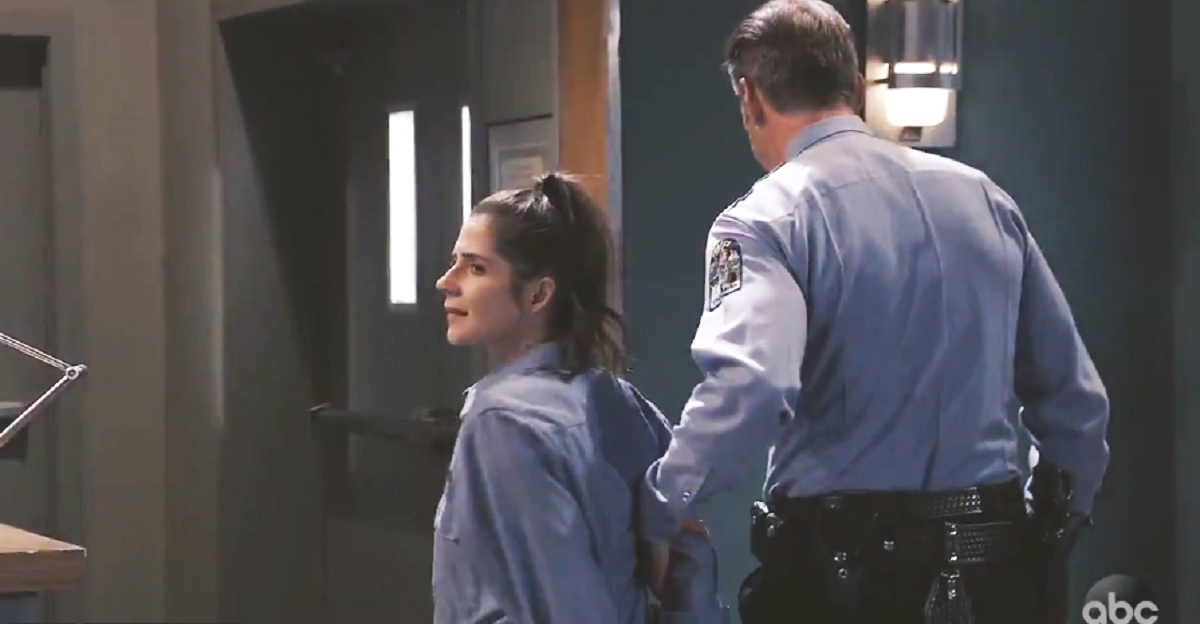 Diane tells Jason that Sam is being sent to Pentonville tonight. Jason gives Sam a pep talk before she gets ready for transfer to Pentonville. Diane is upset. Jason wants to know how he is going to keep his promise to get Sam out of jail. Diane explains Sam’s list of prior offenses and suggests that Sam is a way to get to Jason. Jason believes the Feds are going after Sam because of him.

Diane is going to point out that Sam is in danger in Pentonville because of her connection to Jason. Diane tells Jason he is not the reason Sam is going to Pentonville, he’s just the motivation. Diane promises to be the best she’s ever been. Sam and Jason get some time alone. Jason tells Sam this could take a while. Sam and Jason can handle this but she worries about the kids. Jason hugs Sam. Jason promises to talk to the kids and explain. Sam and Jason say their goodbyes and she’s taken away.

Carly suggests Jax thinks if she hadn’t gone back to Sonny, Morgan might still be alive. Sonny talks to Morgan about how much his loss hurts. Sonny tells Morgan how much he misses him. Jax tells Carly what happened to Morgan was caused by a lot of choices. Carly leaves the hospital and meets Sonny at Morgan’s grave. Carly and Sonny talk about Morgan and how much he loved Halloween. Sonny and Carly make plans for Donna for next year.

General Hospital’s Jax meets with Hayden Barnes (Rebecca Budig) and they discuss Nina Reeves (Cynthia Watros) and Valentin Cassadine (James Patrick Stuart). Jax suggests they strike while Valentin is distracted. Jax tells Hayden that what she does is her business. Jax says as a father, Hayden is dead wrong. Jax tells Hayden she has kept Hamilton Finn’s (Michael Easton) daughter away for years. Finn says Hayden nor Finn can get this time back with their child. Jax tells Hayden she is making decisions for two people who don’t know the whole story.

General Hospital’s Josslyn Jacks (Eden McCoy), Trina Robinson (Sydney McKayla), Cameron Webber (William Lipton), and Dev Corbin (Ashton Arbab) meet in Sonny’s kitchen. Dev wants to take Sonny’s car to the store. Jocelyn tells Dev her brother got killed taking a car that wasn’t his. Cameron tries to calm Jocelyn down. Dev had no idea that Morgan died three years ago. Dev overs to go. Jocelyn returns after storming out and apologizes. Carly and Sonny arrive home. Sonny sees the pumpkins the teenagers carved and thanks them. Carly says Morgan would be happy with his little sister.

Finn suggests that Hayden didn’t have a miscarriage but had his baby and brought it with her. Finn says he’s crazy for thinking that, Alexis disagrees. Finn learned the hard way that lying is how Hayden deals with things. Finn doesn’t want to confront Hayden about this. Finn says it took a long time and he has moved on. Alexis questions what if he’s right. Finn calls Anna and asks her to come home.

Liesl vows to keep an eye on Peter and expose him to Maxie Jones (Kirsten Storms) is she has to. Peter asks why Liesl wants him with Maxie. Liesl says she doesn’t but Maxie has lost enough and she loves him. Liesl tells Peter to keep his facade in place. Nathan would want Maxie to be happy. Valentin calls Liesl and tells her not to leave town. Valentin says Nina believes Sasha acted alone.

General Hospital’s Nina arrives to talk to Valentin. Valentin doesn’t want Charlotte Cassadine (Scarlett Fernandez) in Port Charles if she’s going to lose Nina again. Nina understands how much Valentin loves his daughter. Valentin let Charlotte love Sasha because it was the only way to get her back. Valentin tells Nina that he knew she wasn’t coming back after she found out he gave Peter to Caesar Faison (Anders Hove).

Valentin says he went to Madeline Reeves (Donna Mills) and pushed her until she told him the truth. Nina tells Valentin if he has been honest this would have been so different. Valentin tells Nina he searched high and low for Nina’s daughter and couldn’t find her. Valentin says he should have left it there. Valentin got drunk and then turned to Curtis Ashford (Donnell Turner).

General Hospital Spoilers: Epiphany Maintains The Peace — Can She Get Liz And Kim To Get Along? https://t.co/VlX1VO8iQ4 pic.twitter.com/UDegL4XvrF

Valentin says he thought Sasha was Nina’s daughter because of the lawyer in New York. Valentin didn’t realize he had given this lawyer an opening. Valentin never met the lawyer, he doesn’t know how this was manipulated. Valentin believes Sasha is a good person. Valentin is sorry because Nina got hurt. All Valentin ever wanted to do was love, Nina.

Valentin begins to walk away. Nina says she believes Valentin. Valentin takes his bags and beings to leave, Nina stops him. Nina was the happiest she’s ever been in her life. The only thing that could make things worse is losing Valentin and Charlotte. Nina asks Valentin not to go to Greece. Nina and Valentin kiss. Stay tuned to General Hospital and keep checking GH spoilers frequently for all the latest news, updates and developments!