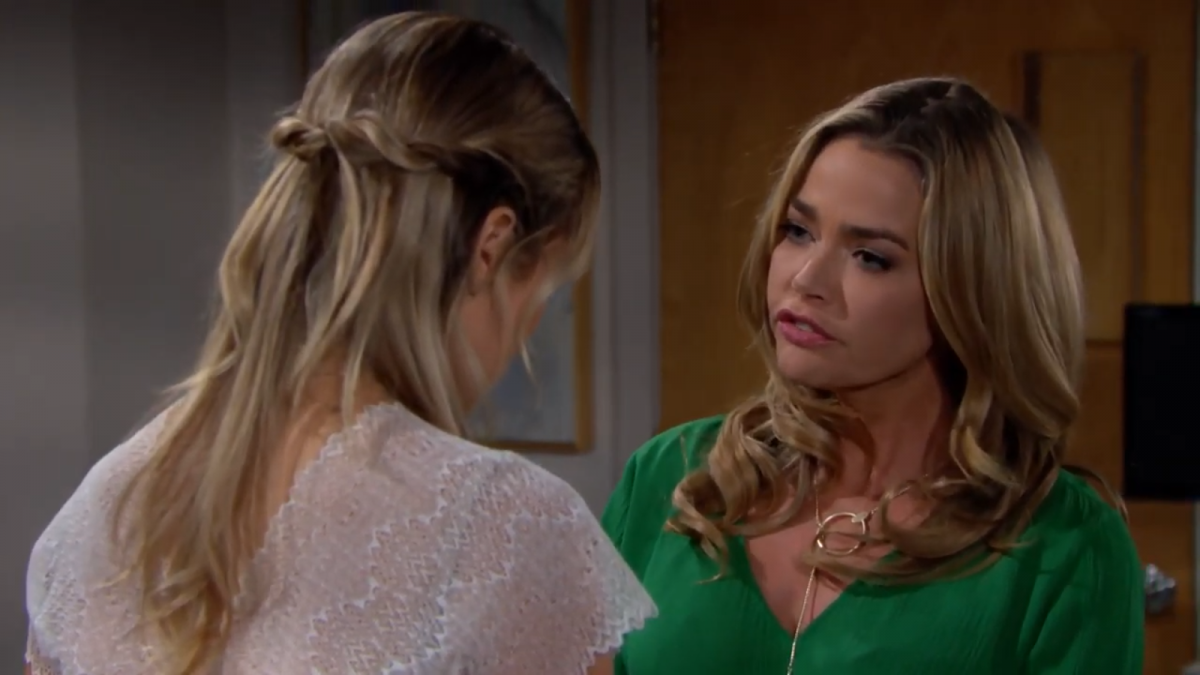 The Bold and the Beautiful (B&B) spoilers document that Shauna Fulton (Denise Richards) feels her daughter’s brave choice should be known. She believes that if the Logans learn what’s happened that family healing will follow.

Flo Fulton (Katrina Bowden) gave one of her kidneys to her aunt, but Katie Logan (Heather Tom) doesn’t know it. Flo feels that she’s made this choice for herself, hoping to stabilize the Logan family when she disrupted their lives in the recent past.

Longtime soap opera fans know that Flo’s identity will not remain concealed forever and that at some point Katie will know who the donor is. If Shauna chooses to present this information, rather than the secret being revealed accidentally, then one character would seem primed to receive it.

Ridge Forrester (Thorsten Kaye) did not fight Flo’s immunity deal. But he didn’t make that choice as a favor to Flo. Instead, he wanted his son, Thomas Forrester (Matthew Atkinson), to remain shielded from the authorities.

When given the chance by Detective Alex Sanchez (Jeremy Ray Valdez) to oppose Flo’s legal agreement, Ridge relented. Without resistance, Flo was then quickly released from jail.

Shauna was naturally grateful to Ridge and let him know it. B&B’s write of Shauna into the now infamous Bikini Bar scene served as the spark of what could be an eventual relationship between Richards’ and Kaye’s characters.

The one person linked to the Logan family who Shauna feels closest to, besides Flo of course, is Ridge. He’s someone who she would be comfortable in divulging Flo’s donation secret to. Whether he then tells Brooke Logan Forrester (Katherine Kelly Lang) is a different issue.

Flo had no idea when she arrived in Los Angeles, California, that she would learn that she is a Logan. Shauna didn’t know that when she first joined her daughter after traveling from Las Vegas, Nevada, either.

A lot of plot has played since the Fulton’s made their moves. A truly negative consequence has Flo ousted from the family she just bonded with this summer.

Shauna believes that Flo’s organ donation will serve as the healing bond, allowing her daughter to be re-embraced by Storm Logan’s (William deVry) family. Fans are also right to believe that Shauna will be proven right.

The quickest way for the Logans to learn who Katie’s donor is would be for Shauna to reveal what she knows. But that’s not what her daughter wants.

So, viewers are considering how else this news can be dropped. An accidental knowledge gain could happen in many ways. Someone could learn of Flo’s donation at the hospital or overhear her, or Shauna, discussing the issue later.

With however it happens, the storyline will advance when Katie learns that her niece made the anonymous donation. The manner in which the knowledge is gained will surely drive all perceptions that follow as well.