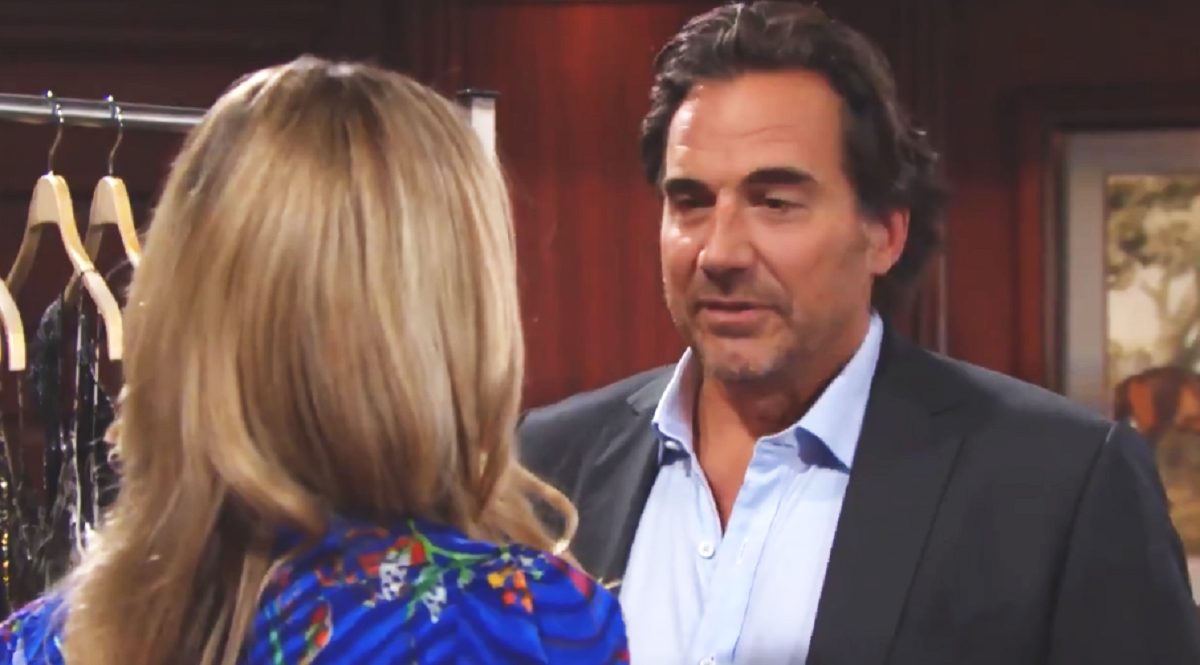 The Bold and the Beautiful (B&B) spoilers for Wednesday, October 16, tease that Thomas Forrester (Matthew Atkinson) will be absolutely thrilled. As B&B viewers know, he’s just overheard Ridge Forrester (Thorsten Kaye) and Shauna Fulton (Denise Richards) talking in the Forrester CEO office, when Shauna told Ridge that she kissed him during their night together at Bikini Bar and that he kissed her back. Of course, Ridge doesn’t remember the kiss because he was quite inebriated at the time.

But on Wednesday’s B&B episode, Ridge and Thomas will have very different reactions to the news about the kiss. Thomas will be pleasantly surprised by the news since he’s hoping that Ridge and Brooke Forrester (Katherine Kelly Lang) will ultimately break up. Thomas will think the fact that Ridge kissed another woman is great since it could be something that he could use to drive a wedge between Brooke and Ridge.

As B&B viewers know, Thomas is on a mission to destroy his father’s marriage to Brooke, and he has a good track record with that since he broke up Hope Logan (Annika Noelle) and Liam Spencer’s (Scott Clifton) marriage earlier this year. Thomas is tired of the Logans having a say in the Forrester family, and he’d like nothing more than to eradicate the Logan women from his family and from Forrester Creations forever.

Bold And The Beautiful Spoilers – Ridge Forrester Thought Nothing Happened

But while Thomas is gleeful over hearing about the kiss, Ridge won’t be feeling so great about it. As B&B viewers know, he’s had a terrible time lately with Brooke, in part due to the evening he spent with Shauna.

He’s told Brooke that nothing happened between himself and Shauna – something he previously believed to be true. But now he’ll know that something did indeed happen, and it will probably strike fear in him. He won’t want Brooke to find out about the kiss, and it will be something new to worry about.

Bold And The Beautiful Spoilers – Will Shauna Fulton Try To Break Up Bridge?

However, B&B spoilers indicate that there might be another way that Brooke could find out about the kiss – from Thomas, or even from Shauna. Thomas will have a chat with Shauna after she’s done talking to Ridge, and he’ll ask her again to help him break up Brooke and Ridge. B&B viewers will remember that Thomas previously asked Shauna to help him in this endeavor, but she refused.

But will she now reconsider and actually help Thomas to drive a wedge between Brooke and Ridge? There’s a good chance that she might, given everything that’s gone down between her and Brooke recently. Brooke has really said and done some nasty things to Shauna, and to Flo Fulton (Katrina Bowden), and Shauna may just be fed up enough with it all to agree to help Thomas.