The Young And The Restless Poll: Who’s The ‘Old Jerk’ Amanda Is Talking About? Vote Now! 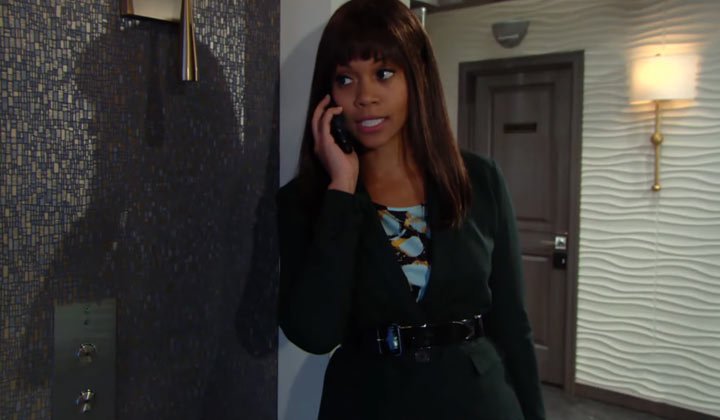 The Young and The Restless (Y&R) spoilers tease that this week Devon Hamilton (Bryton James) and Elena Dawson (Brytni Sarpy) will both hear an off-her-guard Amanda Sinclair (Mishael Morgan) slip up out of frustration with the will challenge case and call her client “an old jerk”! Who could the “old jerk” be?

If he is indeed an older man, age perception, of course, is subjective, but we, like Devon, can safely rule out Chance Chancellor (John Driscoll), age 31, Adam Newman (Mark Grossman), age 35, and probably Cane Ashby (Daniel Goddard), age 45 or 48 depending on who’s counting!

The man would have to have known the Chancellor family, probably known Devon, Hilary Curtis (Mishael Morgan) Cane, Chance, and possibly Katherine Chancellor (Jeanne Cooper) as well. Here are some candidates to choose from, we want to know who you, the Y & R fans, think the “old jerk” might be, and again, age is in the eyes of the beholder!

Tucker McCall (Stephen Nichols) is 62 or 68, again, depending on who’s counting and which soap opera reference you’re looking in. The actor himself is 68. He is Devon’s birth father and Katherine’s long-lost son and Jill Abbott’s (Jess Walton) long-lost brother. He is mentioned as the one who Katherine’s late attorney told the truth about the inheritance to on his deathbed.

Tucker had stolen Katherine’s company (she owned Jabot at the time) out from under her as revenge for putting him up for adoption, and Adam Newman was one of his employees and Kevin Fisher (Greg Rikaart) was another. Tucker sold Jabot to Victor Newman (Eric Braeden) who turned it back over to Katherine, but then Tucker blackmailed her and got it back again. It is worth noting if Tucker returns to the Y & R canvas it will likely be as a recast since Stephen Nichols is otherwise occupied at another soap.

Colin Atkinson (Tristan Rogers) is around 68 years old, depending on who’s counting and which soap opera reference you’re looking in. The actor himself is 72. He is Cane’s birth father and a crime boss for the Australian Mafia. He tried to court Jill, Cane’s adoptive mother and Cane didn’t want to acknowledge he even knew him when he first came to town, Colin being an embarrassment because of his criminal activities.

Cane’s con artist dad knew Devon and Hilary when they were dating, and had witnessed that Hilary was still married to Neil Winters (Kristoff St. John) and blackmailed Devon for two million dollars because of it. Jill and Colin later married. She is still legally married to Colin although he left town. Tristan Rogers is also otherwise occupied so if a Colin return is in the offing, he also may be recast.

Arthur Hendricks (David Hedison) is Tucker McCall’s father, so he is probably in his 80s. He was a former judge, and while one would think he would be beyond reproach, he would probably know how to prepare wills and legal paperwork since judges usually are lawyers before they are judges, although a judge is an elected official! He was accused by his stepson Harrison Bartlett (Kin Shriner) of murdering his mother, Eleanor Hendricks (never cast) for her money.

There was an investigation, but nothing could be proven, and Arthur was engaged to Katherine for a short time but broke up and left town after Harrison’s accusations and not being able to handle all the suspicions of Jill. He left town in 2004 and is Devon’s grandfather so this would be a long shot, although there is that accusation of Harrison’s. He may have known Chance but he would have been a teenager at the time and Devon a child, and Cane didn’t come to Genoa City until 2007.

The Young and the Restless Spoilers: Sharon Playing Lover’s Games: Rey To Naive To See Through Her? https://t.co/Y1IXtmb1wj pic.twitter.com/uvyfWgCVEA

Brock Reynolds (Beau Kayser) is another possibility. The actor died in 2015 at the age of 63 so a recast would be needed, but Brock was on the Y &R canvas off and on since 1974. He was the chairman of the Chancellor Foundation and was married to Jill at one time. He was Mackenzie Hellstrom’s (Kelly Kruger) birth father, with Amanda Browning (Denice Duff) and Tucker McCall’s half-brother.

He was last seen in 2013 at Katherine’s funeral so he may have known all the parties involved in the challenge to her will, probably knew Chance and definitely knew Cane, and it is an interesting coincidence that he was involved with an Amanda Browning and the attorney handling the challenge is named Amanda Sinclair!

So let us know which of these candidates you think could be that “old jerk” that Amanda referred to, and remember recasts are always possible in the case of busy or deceased actors.