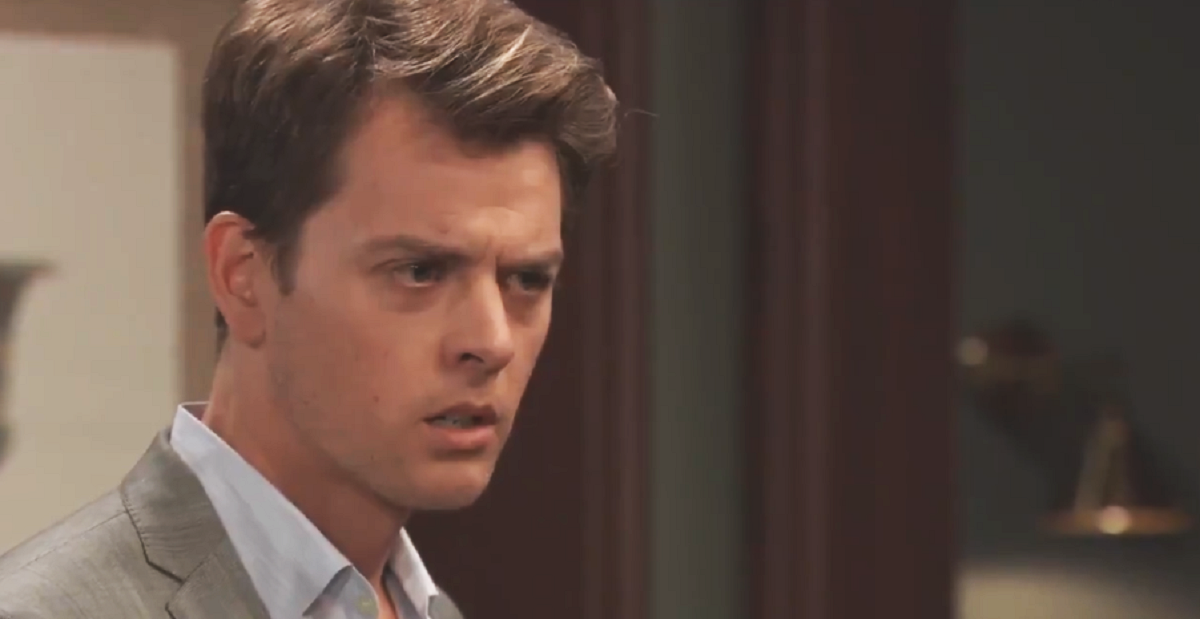 Chase has to do his job and he tells Michael to stay with Sasha. Michael can keep Sasha out of prison, Chase can keep Nelle Benson (Chloe Lanier) in prison. Valentin thinks Nina should let this go. Valentin knows Sasha hurt her. Valentin wants Nina to heal again. Sasha doesn’t blame Nina for this. Michael wants Sasha to tell the authorities that Valentin arranged the test results.

Alexis Davis (Nancy Lee Grahn) arrives, Michael asks if she can help Sasha. Michael stays while Sasha talks with Alexis. Alexis excuses Michael and asks what part Valentin played in this. Valentin explains that going after Sasha won’t make Nina happy. Valentin keeps pushes Nina to get married today. Nina gets a message from Alexis and asks her to come to the PCPD. Valentin is worried when Nina leaves alone.

Nina arrives at the PCPD and Alexis wants Nina to drop the criminal charges and sue Sasha in court. Sasha agrees to pay back everything Nina spent on her. Michael confronts Valentin about Sasha’s arrest. Valentin threatens to sue Michael. Nina refuses to keep this out of court. Nina tells Sasha she pretended to love her. Sasha tells Nina she does love her. Nina tells Sasha to go to hell and leaves. Sasha asks what happens next. Michael tells Valentin to get Nina to back off Sasha or he will go down with her.

General Hospital’s Alexis goes to Charlie’s for breakfast. Alexis tells Julian Jerome (William DeVry) that her personal trainer is trying to kill her. Julian wants to know if Alexis has gotten Olivia Quartermaine (Lisa LoCicero) to back off. Julian cannot think of anyone other than Olivia who wants to put him out of business. Kendra Lennon (Michelle Argyris) arrives and asks if Olivia is keeping up with her supplement.

General Hospital Spoilers – Brad Cooper Has Nightmares After The Hearing

Alexis says she had a doctor check out the powder. Alexis tells Kendra the supplement checked out fine. Lucas goes to Charlie’s to talk to Julian. Lucas tells Julian about Brad talking about Michael in his sleep. Kendra visits Kiefer Bauer’s (Christian Alexander) grave. Kendra mixes up another batch of power vowing to get rid of Alexis.

General Hospital’s Brad Cooper (Parry Shen) is dreaming that he is at Nelle Benson’s (Chloe Lanier) parole hearing. Brad dreams that Nelle tells Michael the truth and he goes to get Wiley Cooper Jones (Theo and Erik Olson). Lucas Jones (Ryan Carnes) asks what Brad was dreaming about. Lucas says Brad seems more stressed than ever. Brad tells Lucas about his prescription.

Lucas wonders why Brad didn’t tell him he was seeing a therapist. Lucas returns, Wiley is fine. Lucas agrees to go to therapy with Brad. Chase shows up at the hearing. Nelle questions where Michael is. Chase tells Nelle that Michael had an emergency. The parole board is shocked that Nelle has a lawyer present. Martin gives his statement and reads the warden’s statement. Nelle speaks to the parole board. Nelle vows to try to make amends.

General Hospital’s Maxie Jones (Kirsten Storms) and Lulu Spencer (Emme Rylan) are shocked the Sasha is there. Nina and Valentin arrive as well. Lulu cannot believe that Nina is back with Valentin. Maxie isn’t surprised that Nina and Valentin are back together. Maxie tells Lulu she made a mess of things. Valentin tells Nina last night was the greatest night of his life.

Nina is upset that Lulu and Sasha are there. Valentin wants to go to city hall and get married right now. Maxie tells Lulu this was about Valentin not being honest. Maxie tells Lulu that all she did was take Nina’s daughter from her. Lulu asks if Maxie wouldn’t have told the truth.

Maxie says it would have been better to keep the secret. Lulu brings up Maxie lie to her about the baby. Maxie cannot believe the Lulu is throwing this in her face. Lulu asks if Maxie regrets telling the truth. Lulu says sooner or later the lies come to light.

General Hospital’s Martin Grey (Michael E. Knight) meets with Nelle about her parole hearing. Martin wants to know if Nelle looked over his notes. Nelle says she doesn’t need the notes, she can handle this. Nelle plans to be out of Pentonville by tonight. Nelle admitted to killing her former fiancé. Nelle blames her pregnancy for her confession. Martin tells Nelle it could take months to be released. Martin needs Nelle to be the sweet person she was the first time they met.

Nelle talks about her child dying. She says the only way to heal is to do good for others. Nelle says comforting the people in the oncology department gives her comfort and she wants to become a hospital worker. Nelle thanks the board for hearing her case. Both Brad and Chase know Nelle is lying. The parole board decides not to recommend parole at this time. Chase shows up at Charlie’s and tells Lucas know the results of Nelle’s parole hearing.

Some exciting confrontations are coming up on General Hospital so stay tuned weekdays on ABC. And you can always check back right here for all the latest General Hospital news, information and spoilers!