The Bold And The Beautiful Spoilers: Thursday, October 17 – Steffy Gets Honest With Liam – Thomas Encounters Zoe at Vinny’s Place 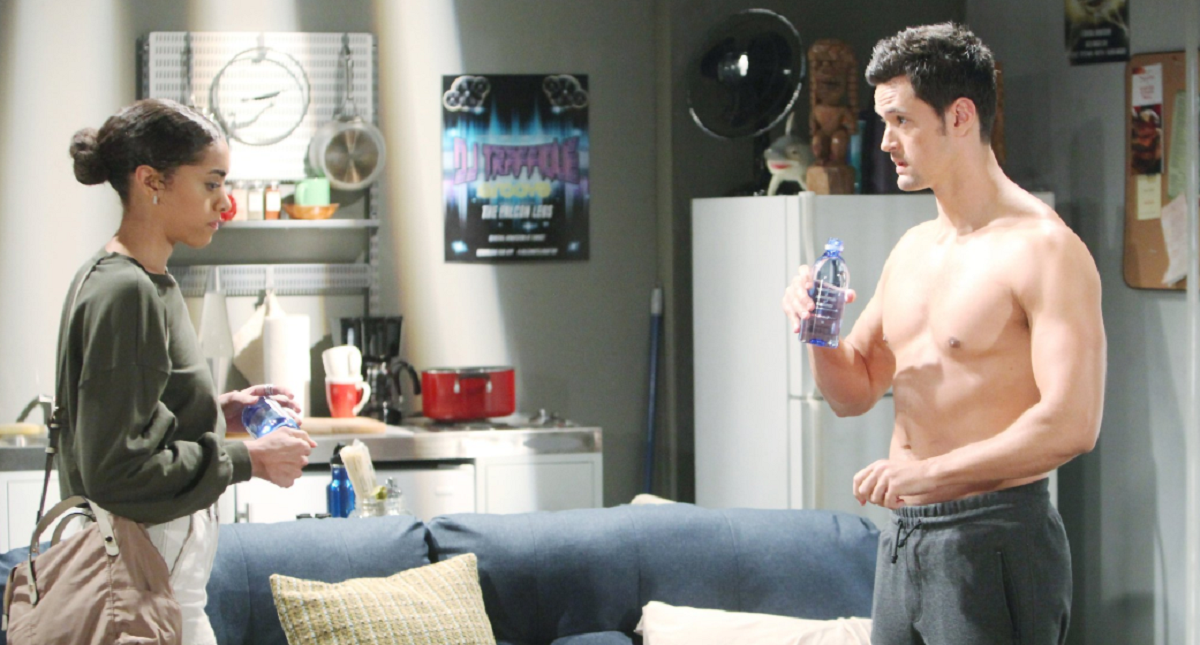 The Bold and the Beautiful (B&B) spoilers for Thursday, October 17, tease that Steffy Forrester (Jacqueline MacInnes Wood) will get a big surprise. As B&B viewers know, she’s been having a tough time since the big reveal about Beth Spencer (River Davidson and Madeline Valdez) occurred. She was forced to watch Hope Logan (Annika Noelle) and Liam Spencer (Scott Clifton) walk out of her home with Beth after spending several months raising the little girl as her own. It was a terrible loss, but Steffy has managed to push through the pain.

According to B&B spoilers, Liam will decide to do something special for Steffy, and he’ll bring Beth over to Steffy’s house for a surprise visit. Steffy will be thrilled to see Beth again, and it looks like they’ll have a great reunion. During the visit, Liam and Steffy will get to talking about how everything has worked out. It will definitely be a bittersweet visit and conversation, and Steffy will get honest with Liam about her feelings.

It looks like Steffy will want to talk about the family that she and Liam nearly had together. They definitely shared some good moments when it was the two of them living with Kelly Spencer (Chloe Teperman and Zoe Pennington) and Beth, who was then known as “Phoebe Forrester.” Steffy will remark that they could have had a great family together, but that things just didn’t work out that way.

According to B&B spoilers, Steffy will also wonder aloud about whether she and Liam could still have a future together. It looks like this will just be part of a larger conversation since it’s pretty clear to everyone involved that Liam has chosen to be with Hope and be a live-in dad to Beth. Still, it looks like he and Steffy will have a good talk, with Liam likely making his future plans with Hope clear.

Meanwhile, on Thursday’s episode of B&B, Thomas Forrester (Matthew Atkinson) will bump into a familiar person – Zoe Buckingham (Kiara Barnes). As B&B viewers know, Thomas has been staying with his friend Vinny Walker (Joe LoCicero) at an apartment complex. He’ll run into Zoe at the complex and both of them will probably be stunned.

Of course, it’s been a while since these two interacted. B&B viewers will remember that Thomas heavily pressured Zoe into keeping the secret about Beth from Hope and Liam. Of course, Zoe also wanted to keep the secret since telling the truth would implicate her father Reese Buckingham (Wayne Brady), but still Thomas pressured her. Their relationship wasn’t great, and Zoe may not be thrilled to see Thomas again.

Bold And The Beautiful Spoilers – Will Zoe Buckingham Return To Forrester?

But still, it seems that the two will talk and Zoe will fill Thomas in on her current status. Exactly what she’s up to these days and how she’s making ends meet remains to be seen, but Thomas will take it all in and it looks like he’ll start thinking about the future. B&B viewers will remember that Zoe used to be a top model for Forrester Creations, and for a while received some serious media attention.

The Bold And The Beautiful Spoilers: Liam Uses Baby Beth To Get Steffy’s Help With Thomas — Guardianship Of Douglas? https://t.co/QrjVUc1LG4 pic.twitter.com/S6ldT3DHs1

Ongoing B&B spoilers indicate that Thomas will eventually tell Zoe that she’s the inspiration behind his designs, and there’s a possibility she just might factor into his plans for returning to Forrester as a head designer. He may decide that he needs Zoe around to be his muse, which could mean a return for her to Forrester Creations down the line.