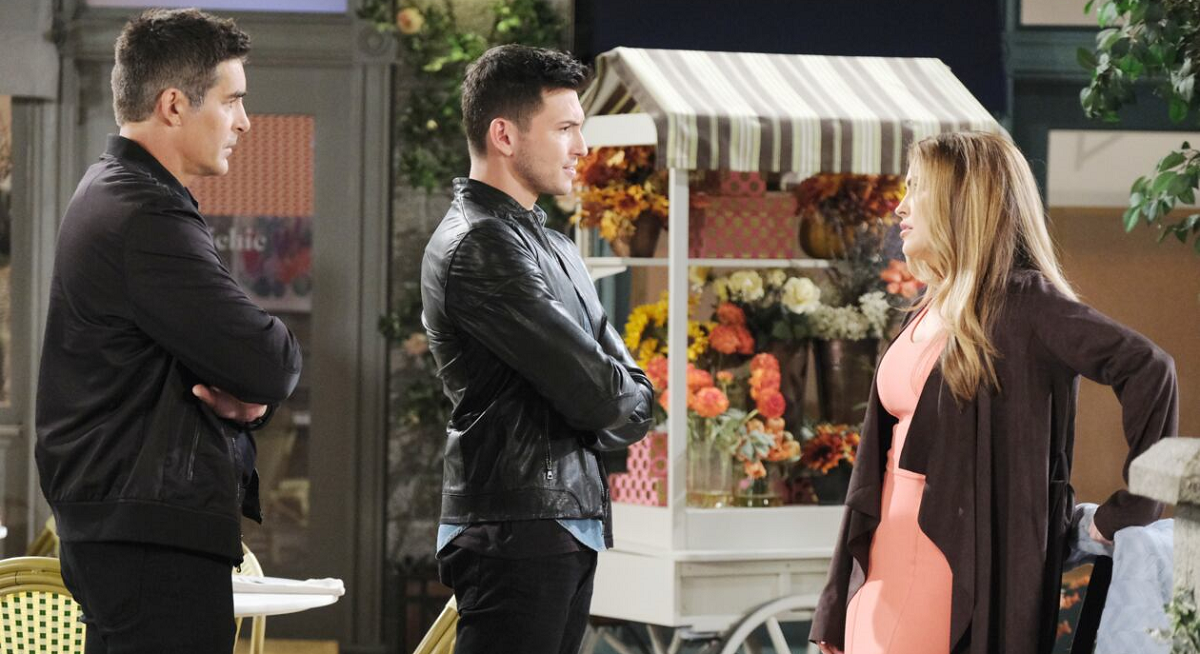 Days of Our Lives (DOOL) spoilers for Friday, October 18, tease that Maggie Kiriakis (Suzanne Rogers) will make a heartfelt plea. DOOL fans know Sarah Horton (Linsey Godfrey) has decided to move away from Salem, but leaving would crush her mom. Maggie will get emotional as she encourages Sarah to stick around. She’ll do her best to change Sarah’s mind, but she’ll have her work cut out for her.

Over with Nicole Walker (Arianne Zucker), Days spoilers say she’ll wrestle with the truth. She knows Sarah’s pregnant thanks to the envelope Dr. Wilhelm Rolf (William Utay) delivered. Nicole also knows Eric Brady (Greg Vaughan) would want to be filled in on the baby. She’ll struggle with whether to come clean in Friday’s episode, but she’ll ultimately choose to keep her mouth shut.

Other Days of Our Lives spoilers say Jordan Ridgeway (Chrishell Hartley) will get an apology from her brother. Ben Weston (Robert Scott Wilson) was wrong about Jordan being involved in the near hit-and-run. He’ll let Jordan know he’s sorry for blaming her, but part of him will remain concerned. Even so, it looks like Jordan and Ben will manage to bond somewhat.

Days of Our Lives Spoilers: Nicole Keeps Sarah’s Pregnancy From Eric, Find Out Why

Of course, looks can be deceiving! This should seem like a sweet scene on the surface, but Jordan still has a few tricks up her sleeve. She may not have been behind Ciara Brady’s (Victoria Konefal) latest incident, but she’s got more planned.

Days of Our Lives spoilers say Ben and Ciara will get a birthday party invitation. David Ridgeway will be celebrating with a bash soon, so Jordan will want “Cin” to be there. Ben will appreciate the gesture, but he won’t realize it’s just his sister’s sneaky setup!

In the meantime, Days of Our Lives spoilers say Julie Williams (Susan Seaforth Hayes) will face a bradycardia diagnosis. It’s a condition that puts her new heart at risk, so Kayla Johnson (Mary Beth Evans) will warn Julie’s loved ones. She’ll encourage them to be supportive and optimistic, but they also have to understand what Julie’s up against. Julie’s still got a long road ahead of her.

Days Of Our Lives Spoilers – Julie Williams Will Be Eternally Grateful

Nevertheless, Julie will want to thank Gabi DiMera (Camila Banus) as soon as she’s allowed. She’s still alive thanks to Gabi’s decision, so she’ll be eternally grateful for that. At the DiMera mansion, Hope Brady (Kristian Alfonso) will wander in without knowing why. She’ll eventually swipe Stefano DiMera’s (Joseph Mascolo) portrait, which certainly isn’t something Hope would normally do.

Hope’s Princess Gina transformation will be complete next week, so don’t miss the shockers and shakeups ahead. We’ll give you updates as other Days news and rumors emerge.

Stick with DOOL and don’t forget to check back often for the latest Days of Our Lives spoilers, rumors, updates and news.