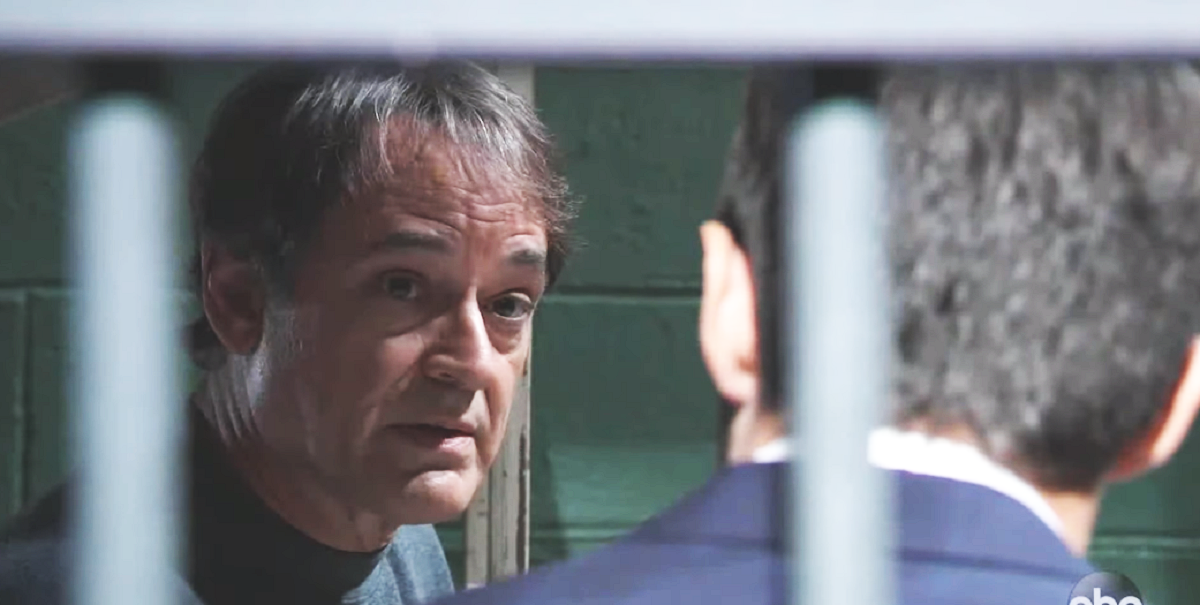 Carly wants to know if Michael broke up with her. Michael says he didn’t break up with Sasha and has known the truth for weeks. Michael explains his reasoning for getting Sasha to stay quiet. Sonny agrees with Michael’s choice. Michael explains that Valentin Cassadine (James Patrick Stuart) had to be behind this. Sonny wonders if Michael thinks he can force Valentin to go along with him. Michael believes he can. Carly is upset and walks away. Michael thinks Carly should understand with her history.

General Hospital’s Curtis Ashford (Donnell Turner) is at the PCPD discussing Sasha with Jordan Ashford (Briana Nicole Henry). Jordan is concerned about Sasha but has more pressing things on her mind. Ryan murders Bryce in his cell.

Jordan gets a call and sends Harrison Chase (Josh Swickard) to Pentonville. Chase calls back and tells Jordan that Bryce Henderson (Brian Gross) is dead. Chase goes to interview Ryan. Ryan talks about Bryce’s disrespecting woman. Chase says a lot of men would love to disrespect Ava Jerome (Maura West) all night long. Ryan lunges at Chase. Ryan is taking away in chains as Chase holds his picture of Ava. Chase threatens to see that Ryan’s mail gets lost.

General Hospital Spoilers: Devious Valentin Wants Nina To Drop Charges Against Sasha, Scrambles To Save Himself

Brad says Lucas is all in and he’s not changing. Brad leaves and Julian makes a phone call. Curtis approaches Lucas at the hospital and they talk about therapy. Curtis wants to talk to Brad about fake DNA tests. Brad feels threatened when people question the hospital’s DNA test integrity. Brad receives flowers that aren’t from Lucas but no card is attached. Lucas wonders who sent them.

General Hospital’s Alexis is talking to Sam McCall (Kelly Monaco) at the PCPD. Jason Morgan (Steve Burton) arrives and thinks he has things handled. Sam asks if Jason got names, he doesn’t answer. Jason gives Alexis his theory on who Bryce is working for, Drew Cain (Billy Miller) is the common denominator.

Jason and Sam tell Alexis that Peter August (Wes Ramsey) is behind this. Jason explains why he thinks it’s Peter. Sam’s ride to Pentonville arrives. Jason tells Alexis that Diane Miller (Carolyn Hennesy) needs to petition for Sam to be kept in county jail for her safety. Sam gets to Pentonville.

Sam’s cellmate is in solitary for putting out her cellmate’s eye. The guard tells Sam her cellmate will return soon and they can get to know each other. The guard quotes Shiloh Archer before leaving Sam.

General Hospital’s Ava and Laura Webber (Genie Frances) are talking about Ryan as someone watches from the shadows. Ava continues to drink, Laura doesn’t think it will help. Laura wonders if Ava has a support system. Laura knows how Ava feels and wants to help her.

Ava wants Ryan to have the death sentence. Laura doesn’t believe that would help Ava. Laura gets a call that Ryan’s cellmate is dead. Laura asks Jordan to send Julian to Ava. Julian arrives to take Ava home. Jordan arrives and tells Laura that Ryan killed Bryce over Ava. Julian tells Ava she has to stay away from Pentonville. Julian says Ryan killed his cellmate for Ava.