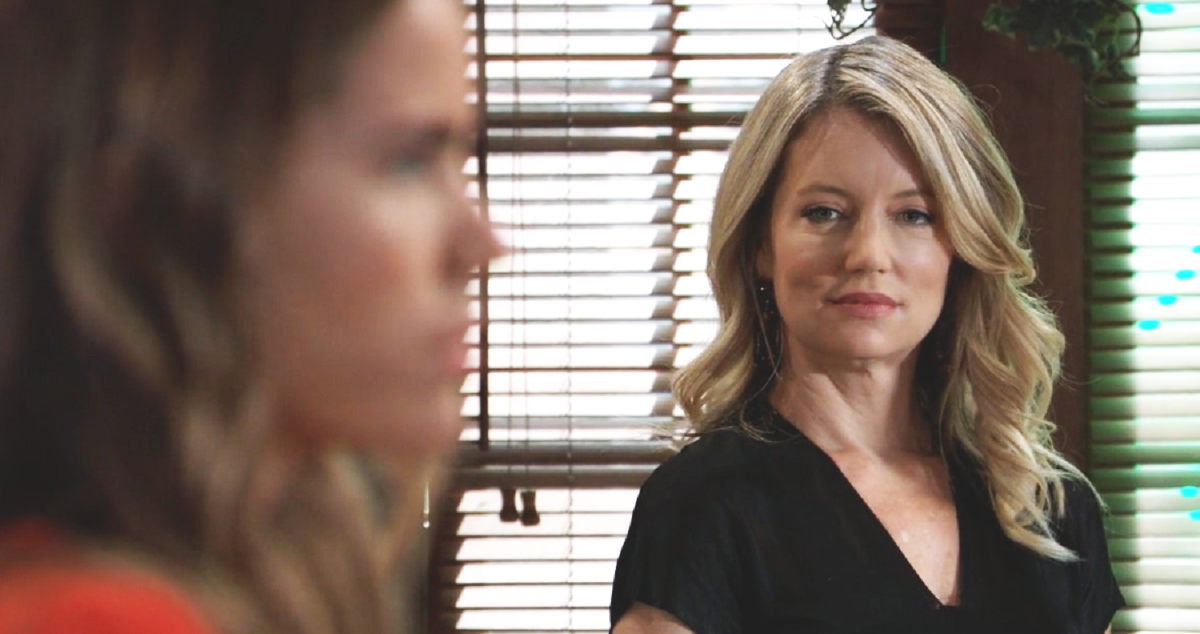 General Hosptial (GH) spoilers tease that Nina Reeves (Cynthia Watros) may have been a runaway bride, she seems to believe Valentin Cassadine (James Patrick Stuart), since Sasha Gilmore (Sofia Mattsson) only gave herself up when she confessed to Nina.

She left out Valentin’s part as the mastermind before the whole thing, because Sasha feels that Valentin did what he did out of his great love of Nina. And that does seem to be the case, but Valentin’s default way of getting out of trouble is to lie.

Nina seemed ready to believe Valentin a little too fast, especially after just speaking with Maxie Jones (Kirsten Storms) about it. Maxie pretty much laid out all the details of why Valentin must be behind Sasha’s impersonation, as Sasha doesn’t have the resources to fake three DNA tests.

General Hospital Spoilers – Could Nina Reeves Really Be That Gullible?

Nina seemed to really hear what Maxie said, so it was surprising when a few short scenes later, Nina arrived at Wyndemere and after making Valentin tell his version of the story, she took him back. Just like that. This seems wildly naïve of Nina, so one has to wonder if she is playing her almost husband, possibly with the help of Jasper Jacks (Ingo Rademacher).

Viewers will recall that Jax is working with Hayden Barnes (Rebecca Budig) to find the codicil of Mikkos Cassadine’s will, which would effectively disinherit Valentin of the Cassadine fortune, most likely returning to Spencer Cassadine (Nicholas Bechtel) or as is rumored his not so dead father Nikolas Cassadine (last played by Nick Stabile).

It entirely possible Jax told Nina about this and since Sasha wouldn’t give up Valentin, she may want in on taking him down herself? Nina spent the entire night after the aborted wedding with Jax, so any number of revelations may have taken place. Perhaps Jax knew about Sasha already, and confirmed it to Nina.

General Hospital Spoilers – Valentin Cassadine Will Stay One Step Ahead

Could Nina have pulled off that good of an acting job, taking Valentin back when she truly can’t stand to look at him? Has Jax enlisted yet another person in his schemes, or could Nina just be taking matters into her own hands, not believing that Sasha could pull the impersonation off all be herself.

But she would want proof of Valentin’s guilt so he can’t lie his way out again. She actually gave him a chance to come clean when she showed up at Wyndemere, but he once again chose to lie. Hopefully Nina isn’t that naïve that this is truly playing out that she truly buys Valentin’s lies.

Only time will tell, but look for Valentin to try to stay one step ahead of Nina. So stay turned to General Hospital, weekdays on ABC! Also you can check back right here for all your General Hosptial news, information and spoilers!