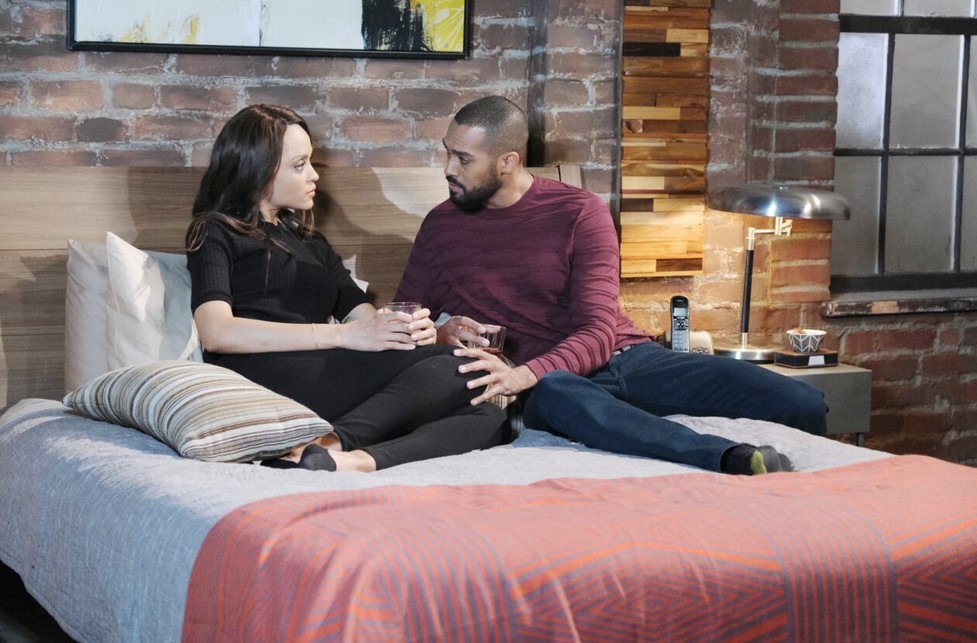 Days of Our Lives Spoilers – Love Is In The Air!

The Days of Our Lives weekly preview teases love is in the air, as two proposals happen. First, Justin Kiriakis (Wally Kurth) proposes to Adrienne Kiriakis (Judi Evans) for the fourth time, to see if they can get it right this time, as their son Sonny Kiriakis (Freddie Smith) and his husband Will Horton (Chandler Massey) interrupt at an inappropriate time! Sonny comes up to his parents’ table where Justin is getting ready to pop the question and pops one of his own, asking what he’s doing! Justin looks around annoyed and sarcastically asks Sonny, “What do you think I’m doing?!” Then Jack Deveraux (Matthew Ashford) brings Jennifer Horton (Melissa Reeves) a tasty looking scone with a stone, only she doesn’t know it until she picks a piece off to taste! There’s a huge diamond ring inside the pastry as Jennifer looks up at Jack in amazement!

Days of Our Lives Spoilers Monday, October 21: Brady and Kristen Growing Stronger, Jennifer Gets Sneaky While Jack Resorts To Begging

Monday, Xander Kiriakis (Paul Telfer) asks Sarah Horton (Linsey Godfrey) for a favor. Viewers know that the favor will probably be connected somehow with Sarah being convinced not to move out of Salem! Meanwhile, Jennifer tries to access Dr. Wilhelm Rolf’s (William Utay) flash drive that she talked Dr. Kayla Johnson (Mary Beth Evans) into letting her deliver to him since she had talked her into letting him have lab space previously. Will she find an electronic version of his formula diary, or will she find something else – like the plans for turning her cousin Hope Brady (Kristian Alfonso) into Princess Gina? Also on Monday, Eve Deveraux (Kassie DePaiva) refuses to sign divorce papers for Jack, and Brady Black (Eric Martsolf) supports Kristen DiMera (Stacy Haiduk) during a medical crisis.

Days of Our Lives Spoilers: DiMera Power Changes Tony – Trouble Ahead For He And Anna? @celebratesoaps #dool #days #daysofourliveshttps://t.co/RgmLuuz8wY

Wednesday, Lani Price (Sal Stowers) and Eli Grant (Lamon Archey) plan their wedding. Their plans will have some alterations due to Julie Williams’ (Susan Seaforth Hayes) needing time to recover, but not anything major. Meanwhile, Gabi DiMera (Camila Banus) plots to end their happiness; she will insist that Eli and Lani attend her late husband, Stefan DiMera’s (Brandon Barash) funeral to support her and out of gratitude for her donation of Stefan’s heart to save Julie’s life. However, after they go to the funeral, Gabi will approach Lani and try to force her into dumping Eli and leaving him at the altar! As far as Gabi is concerned, Lani ruined her life by killing her husband, so why should she have a happy marriage to Eli? Also Wednesday, Justin will propose to Adrienne.

Thursday, Gabi plots to avenge Stefan’s death; meanwhile, Brady will show concern over Kristen, who he just had supported through a medical crisis, when she insists on going to her brother Stefan’s funeral. Also on Thursday, Jack proposes to Jennifer, and Ciara and Ben arrive for David’s party.

Friday, Rolf completes his plan for Hope – as he places a tiara in her hair. Her transformation into Princess Gina is now complete! Meanwhile, Ciara doesn’t feel well at baby David’s birthday party – does she eat the poison cupcake, or did someone else and Ciara’s illness is just a coincidence? Also on Friday, Julie and Eli have a heart to heart conversation.