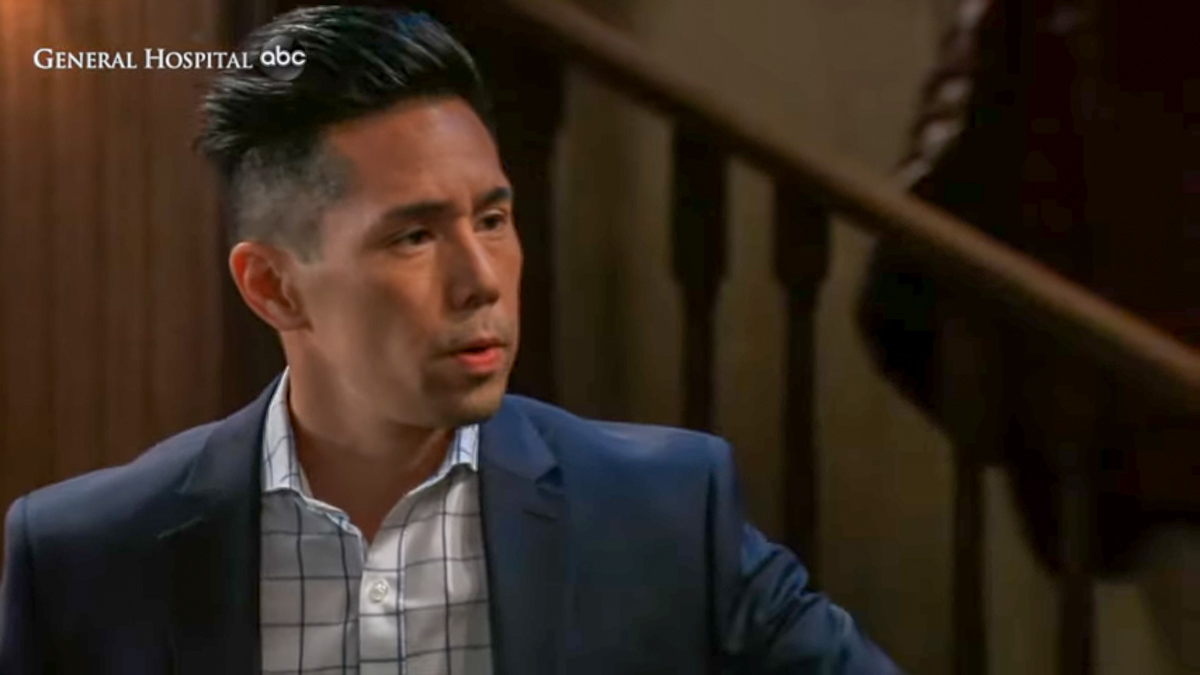 Monday, Brad Cooper (Parry Shen) received flowers, and he is not happy with Julian Jerome’s (Williams DeVry) assessment. Brad is offended as he asks Julian if he thinks that he’s cheating on Lucas Jones (Ryan Carnes)! Felicia Scorpio (Kristina Wagner) is concerned about Anna Devane (Finola Hughes) being gone so long and the possibility that her relationship with Dr. Hamilton Finn (Michael Easton) could be affected; she asks Robert Scorpio (Tristan Rogers) if he can help get Anna home!

Tuesday, the competency hearing for Franco Baldwin (Roger Howarth) begins, and Elizabeth’s words up on the stand about her love for Franco and never giving up resonate with Julian, who is at the hearing, and he thinks back on what he could have done to save his relationships; elsewhere, Finn makes plans to see Hayden; is he planning to look for evidence of “Honeybun” who Hayden told him was her dog?

Wednesday, Jordan Ashford (Briana Henry) speaks of Franco’s heroism up on the stand. She may mention both his rescue of Cameron Webber (William Lipton) by taking his place in the forced memory transfer of pre-2012 Drew Cain’s (Steve Burton) memories, and his heroism in exposing Ryan Chamberlain (Jon Lindstrom) at the risk of his life. Elizabeth will become emotional!

General Hospital Spoilers: Lucas And Brad Head To Couples Therapy, Can It Save Their Relationship? https://t.co/Uli01uYIFt pic.twitter.com/hicJmxRSNT

Thursday, Ava is feeling better and returns to her art gallery. Viewers will recall that in a recent episode from last week she took a call about an issue there. Is the issue handled, or will Ava have to handle it herself? Elsewhere, Laura and Curtis will brainstorm about the search for the codicil to Mikkos Cassadine’s (John Colicos) will, and possibly the search for Helena Cassadine’s (Constance Towers) portrait that Valentin Cassadine (James Patrick Stuart) said he threw away because Charlotte Cassadine (Scarlett Fernandez) was scared of it.

Perhaps Curtis has a way to take the picture off Laura’s phone and enlarge it without too much pixilation. Also on Thursday, Monica Quartermaine (Leslie Charleson) will be visibly upset, Kim Nero (Tamara Braun) will be shocked, and Finn won’t understand.

Friday, Valentin is smug – once again, it looks like he has outwitted someone who has tried to outwit him! At Franco’s competency hearing, Kim will make a startling confession! Also on Friday, Ava will storm out, obviously angry; Maxie Jones (Kirsten Storms) will grow curious, and Diane Miller (Carolyn Hennesy) will be confident.