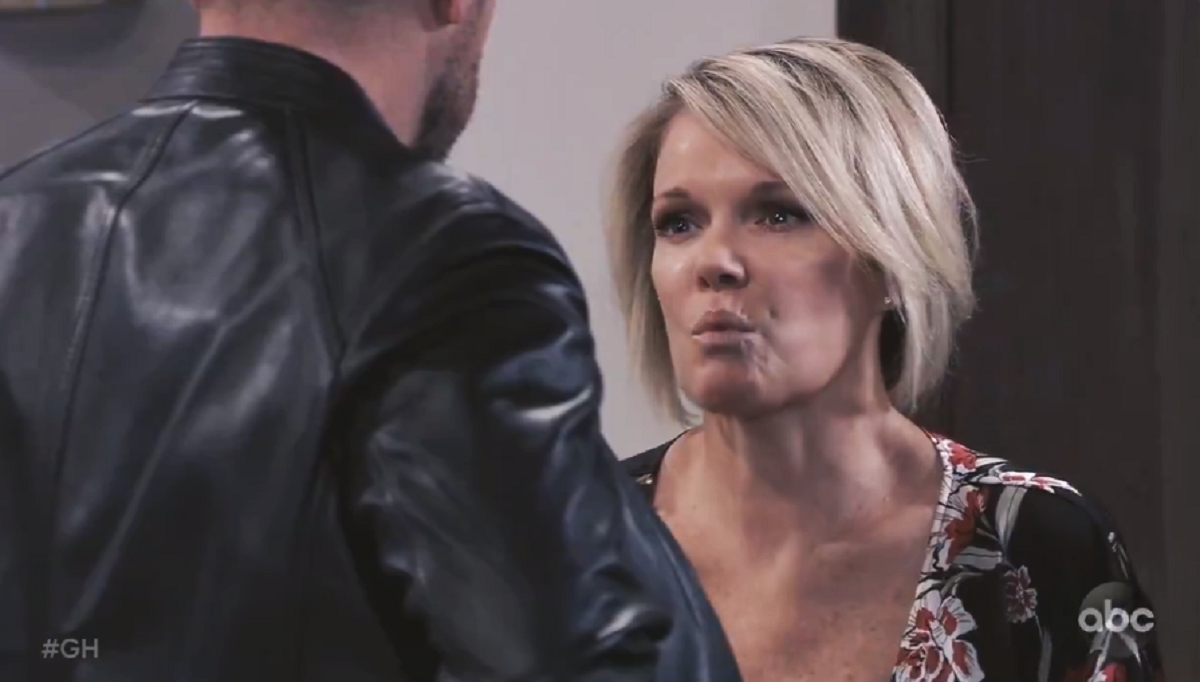 Felicia explains that Anna told her Hamilton Finn (Michael Easton) needs her to come home. Robert doesn’t have the authority to pull Anna off an assignment. Felicia says Robert is the only one who can talk some sense into Anna. Robert tells Felicia he and Anna have boundaries and he cannot interfere.

Felicia sympathizes with Finn, she’s been there. Felicia talks about how much of a strain the job put on her and Frisco’s relationship. Felicia gets the hint that Robert wouldn’t care if Finn got back with Hayden Barnes (Rebecca Budig).

General Hospital’s Curtis Ashford speaks to Hamilton Finn at the hospital. Curtis cannot give Finn any information about Hayden. Curtis wonders why Finn is rehashing this. Finn admits to believing Hayden is lying to him about the baby. Liz and Hayden plan to talk at home later. Finn texts Hayden, he needs to see her.

General Hospital’s Hayden speaks to Liz Baldwin (Rebecca Herbst) about Franco Baldwin’s (Roger Howarth) hearing. Hayden isn’t paying attention and blames work drama. Hayden tells Liz she learned everything she knows about being a mother from her. Liz thinks Hayden would be a good mother if she ever wanted to try again. Hayden only wanted kids with one man and he’s not an option.

General Hospital’s Michael Corinthos (Chad Duell) and Sasha Gilmore (Sofia Mattsson) arrive at the Metrocourt. Carly Corinthos (Laura Wright) is shocked to see Michael and Sasha there. Michael speaks to Carly who wants time alone with Sasha. Carly attacks Sasha for being a con artist. Sasha tells Carly that she is why Michael is staying by her side. Carly tells Sasha that flattery isn’t going to help her. Carly says Sasha could be facing charges. If Nina presses charges Sasha will face it. Carly agrees that Sasha is nothing like Nelle Benson (Chloe Lanier).

Carly tells Sasha they have more in common than she knows and about her arrival in Port Charles. She talks about the damage control she had to do. Carly had support without someone judging her. Sasha feels like she and Carly are in a semi-good place. Carly thinks Sasha will learn and grow from this. Carly is willing to give Sasha a second chance. Michael returns with Carly’s keys. Michael asks how Carly and Sasha are doing. Carly says she and Sasha came to an understanding. Carly says she and Sasha are more alike than they thought.

General Hospital’s Nina Reeves (Cynthia Watros) is at Crimson when Jasper Jacks (Ingo Rademacher) brings her some files. Jax wants Nina to go to dinner with him. Valentin Cassadine (James Patrick Stuart) arrives to pick her up. Jax tries to throw Valentin out.

Nina gets between Jax and Valentin. Nina explains that Valentin wasn’t in on the scam. Valentin thanks Jax for his support. Valentin will respect Jax’s place as Nina’s boss. Valentin wants Jax to respect his and Nina’s relationship. Nina sends Valentin upstairs to get a table. Jax believes he and Nina are friends. Jax hopes Nina knows what she is doing, Nina says she does.

General Hospital’s Brad Cooper (Parry Shen) receives flowers. Lucas Jones (Ryan Carnes) questions who sent the flowers. Brad has no idea who could have sent the flowers. Lucas thinks back to Brad’s nightmare. Lucas asks Brad to call the florist to see who sent the flowers. Brad throws away his flowers and Neil Byrne (Joe Flanigan) tries to confirm their appointment for tomorrow. Brad says Lucas isn’t coming anymore. Ava Jerome (Maura West) pulls out her gun and sits and waits. Lucas is upset with Brad for not wanting him to attend the session with Neil.

General Hospital’s Julian arrives with Ava who fainted earlier. Ava claims to be dehydrated. Lucas wants to examine Ava anyway. Julian questions the flowers. Julian accuses Brad of cheating on Lucas. Lucas asks about Ava’s alcohol intake. Ava explains it is because of Ryan Chamberlain (Jon Lindstrom). Neil comes in to visit Ava as well. Everyone thinks Ava is having a breakdown. Ava asks why she doesn’t have a right to be upset over Ryan killing again for her.

Ava arrives home and tries to get rid of Julian. She is furious with Julian over his actions. Julian asks about the person Ava thinks is watching her. Ava wants to be alone, Julian leaves. Ava locks the door and then pours herself a drink. Ava walks onto the terrace, she knows someone is out there. Ava places her gun under her pillow and tries to sleep. Stay tuned to General Hospital and keep checking General Hospital spoilers frequently for all the latest news, updates and developments!