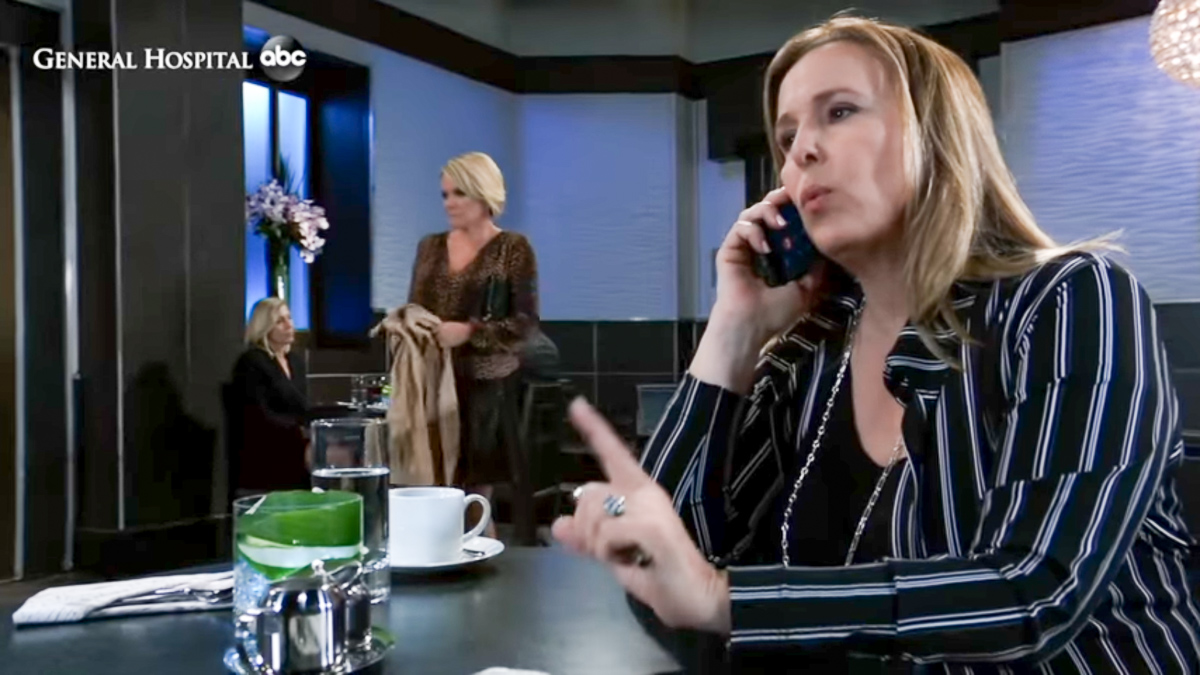 General Hospital (GH) spoilers tease that one of the most unexpected things that occurred because of the Ryan Chamberlain (Jon Lindstrom) story is the (kind of) friendship that has developed between Ava Jerome (Maura West) and Laura Collins (Genie Francis). It’s not like they are all chummy like Maxie Jones (Kisten Storms) and Lulu Falconeri (Emme Rylan). but Laura showed Ava great compassion when Ryan was revealed to be impersonating Kevin Collins, but that he murdered Ava’s daughter, Kiki Jerome (Hayley Erin) and then made love to Ava afterward.

When Kiki was killed, she and Ava were not getting along at al because Kiki started dating Dr. Griffin Munro (Matt Cohen) after he and Ava parted ways. Ava hated that her ex and her daughter were together and believed they were only doing it to spite her. Kiki was murdered before she and Ava had a chance to reconcile.

The fact that Ryan murdered her daughter and then made love to Ava right after still sickens her. Ava is truly torturing herself, both with alcohol and other self-destructive behavior. She still reads the letters that Ryan has been sending her from prison and she claims to not want anything to do with the psychopath, but she just can’t seem to quite let him go? She did return all the letters to Ryan and begged him to leave her alone, but she did it in person and it’s obvious Ryan is still just as obsessed with Ava as she is with him.

Ava isn’t the easiest person in the world to talk to, let alone try to help. But Laura won’t want to see Ava suffer anymore, especially because of Ryan, so perhaps she will come up with am idea. Ava currently has no purpose, so she is filling her time with drinking and guilt. So perhaps, she will try to fill Ava’s time with a new purpose!

Viewers will recall that right before Nikolas Cassadine (then Nick Stabile) was shot and presumed murdered by Valentin Cassadine, Nikolas and Ava had just become a couple. Or at least they were moving in that direction. Ava has made it clear that she feels Nik’s death was the beginning of her troubles. Laura knows that Nik’s death was tough on Ava too, even though she did change her story to support Valentin after he sent her away to have her facial scars removed if she would testify that Nikolas’ death was self-defense and not murder. A vain Ava agreed and to this day Ava still feels bad for betraying Nikolas’ memory in that way.

GH Spoilers – Will Laura Collins tell yet another person about the so called codicil?

So look for Laura to tell Ava about the codicil and help her restore Nikolas’ fortune and home back to his son, Spencer Cassadine (Nicholas Bechtel). After some convincing, Ava will most likely jump at the chance to do something good in Nikolas’ honor. But in the end, they both may get a huge, happy surprise if General Hospital spoilers are correct and Nikolas is truly alive and about to make his return to Port Charles! Perhaps Ava and Nikolas will even be able to start from where they left off, and truly become a couple!

Will Laura ask for Ava’s help as a way of getting her to stop torturing herself over Ryan and Kiki? Will these two ladies become real friends? Will danger follow them as they continue their search? Is this just what Ava needs? Only time will tell if yet another person becomes privy to the hunt for the infamous document but you can find out what happens next by watching General Hospital, weekdays on ABC. And check back right here for all your General Hospital news, spoilers and information!