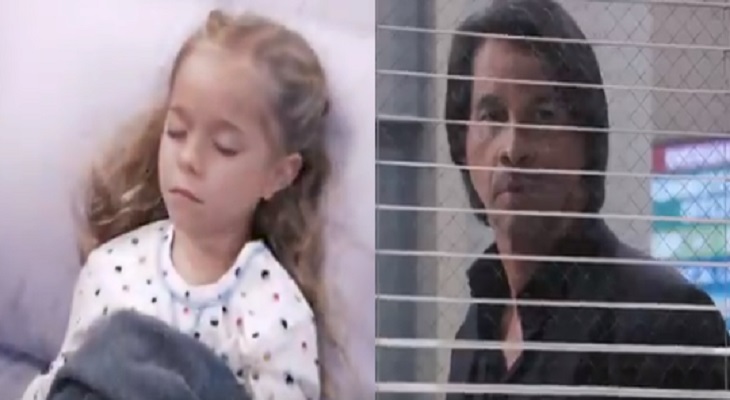 General Hospital spoilers tease that this week, there will be one aftershock after another as Dr. Hamilton Finn (Michael Easton) meets his daughter, Ava Jerome (Maura West) is rattled, and the decision is made in Franco Baldwin’s (Roger Howarth) competency case.

First, in the weekly General Hospital promo, called “October Bombshell” there are a couple of quick shots of Sonny Corinthos (Maurice Benard) cautiously opening a door, like he’s expecting danger behind it, then Ava shrieks as she’s startled.

Then we see Dr. Hamilton Finn in front of a hospital room with a frail looking, very sick little girl asleep in a hospital bed – or is she unconscious? He confronts Hayden Barnes (Rebecca Budig) and says, “The patient in that room is…” Hayden finishes his sentence with “My daughter. She’s your daughter too.” General Hospital viewers have to wonder if the next rare infectious disease he has to come up with a cure for is one afflicting his and Hayden’s little girl! In real time she should only be two, but this little girl looks at least three or four! Soap opera rapid aging syndrome (SORAS) has struck again!

Ava Jerome Is Panicked And Paranoid

Next, Ava is panicked and paranoid as she appears to be at her art gallery, and talking to Curtis Ashford (Donnell Turner). Perhaps he is there protecting her because she insists she has a stalker, and she hired him for that purpose, or maybe to install extra security systems in her art gallery. Ava is rattled as she tells Curtis that she can feel someone watching her!

It can’t be Ryan Chamberlain (Jon Lindstrom) – he’s in Pentonville Prison! Could he be sneaking in and out of the prison unnoticed? It’s doubtful; he’s good, but he’s not THAT good! Perhaps he has someone else spying on her for him? That could be a possibility, but if that is the case Curtis should find the mysterious stalker quickly! Maybe it’s someone that Ava would not have to be frightened of if he or she would show themselves, but she doesn’t know that as long as the person doesn’t reveal him or herself!

There Is A Ruling In Franco Baldwin’s Competency Hearing

In real life, competency hearings are not usually in a courtroom nor are they ruled on by a judge or magistrate, but in Soapland things are done differently sometimes! Elizabeth Baldwin (Rebecca Herbst) has been wanting her husband Franco back, and wants him to have a chance at being himself again instead of a pre-2012 version of Andrew Cain (Steve Burton) which is what happened when Shiloh Archer (Coby Ryan McLaughlin) kidnapped Cameron Webber (William Lipton) and Franco heroically convinced him and Dr. Arthur Cabot (Time Winters) to let him take his place! Who will win? Kim Nero (Tamara Braun), Attorney Martin Grey (Michael E. Knight) and “Drew”, or Elizabeth and her attorney, and Franco’s father, Scott Baldwin (Kin Shriner)?

“The patient in that room is… my daughter?” #GH pic.twitter.com/jLQmnw9p8L