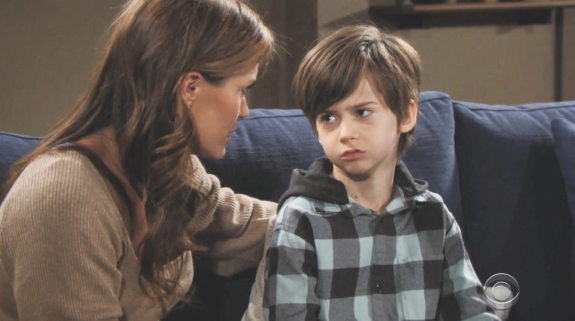 The Young and the Restless (Y&R) spoilers for Tuesday, October 22, tease that Chelsea Newman (Melissa Claire Egan) will pay Victor Newman a visit with Connor Newman (Judah Mackey). At the ranch, Connor chats with Victor before dashing off to get a snack. Victor senses that Connor isn’t quite himself, which doesn’t surprise Chelsea after everything the boy’s been through.

Victor defends his faked death as a way to prevent Adam’s dark path. He doesn’t believe Adam will ever come back, but Chelsea admits she’s trying to bring Connor’s father home. In Las Vegas, Adam isn’t pleased to see Nick Newman (Joshua Morrow) at his door. Nick insists that Connor needs him and explains the situation, which he argues is Adam’s fault.

Adam suggests it’s just more proof that he shouldn’t be around Connor. The brothers bicker until Chelsea calls from the hospital, where Connor was taken after leaping off a jungle gym. He broke his arm, and Chelsea’s worried about the kid feeling so invincible. Nick brings Adam up to speed and wonders if Adam still feels he’s not needed back home.

At the coffeehouse, Esther Valentine (Kate Linder) wants the latest news on Katherine Chancellor’s will. Jill Abbott (Jess Walton) notes that she hired someone to authenticate the allegedly original pages. Cane Ashby (Daniel Goddard) mentions getting knocked out and talks about the note Chance Chancellor seemingly left him. It revealed that Chance was deep undercover, but Esther has doubts since the pages could’ve just been mailed.

Young And The Restless Spoilers: Devon Hamilton Will Receive A Surprise

Later, a woman authenticates the pages. She claims the page revealing Devon Hamilton (Bryton James) as the fortune recipient was on different paper. The page that reveals Cane as the heir matches up with the rest of the will. Cane marvels at the shocker and wonders why Katherine would leave him all that money. Jill just hopes Devon can come to grips with this and honor Katherine’s true wishes.

A counterfeit will forces a choice that shocks everyone. Don’t miss it this week on #YR! pic.twitter.com/Qbcl2efesw

At the Abbott mansion, Dina Mergeron (Marla Adams) comes for a visit. Jack Abbott (Peter Bergman) and Traci Abbott (Beth Maitland) get Dina talking about some old photos. After Dina recognizes herself, Jack’s eager to learn more about Stuart Brooks. Traci reads the letter, which gets Dina choked up. Dina alludes to a wonderful yet terrible night, but she wants to go home. Traci eventually changes the subject to avoid overdoing it.

Once Jack gets Dina settled back in her memory care facility, he feels guilty about pushing too hard. Traci reassures Jack before showing him a note she found, which is on the back of a prom afterparty invitation. Stuart pleads with Dina to come tonight in his note and promises to change her mind. Traci realizes that since the after party was held there, whatever happened that night likely happened in that very house.

The Young and the Restless spoilers say more twists and turns are ahead in this story, so don’t miss what’s in store. We’ll give you updates as other Y&R details and rumors emerge. Stay tuned to see what’s ahead on the CBS soap.