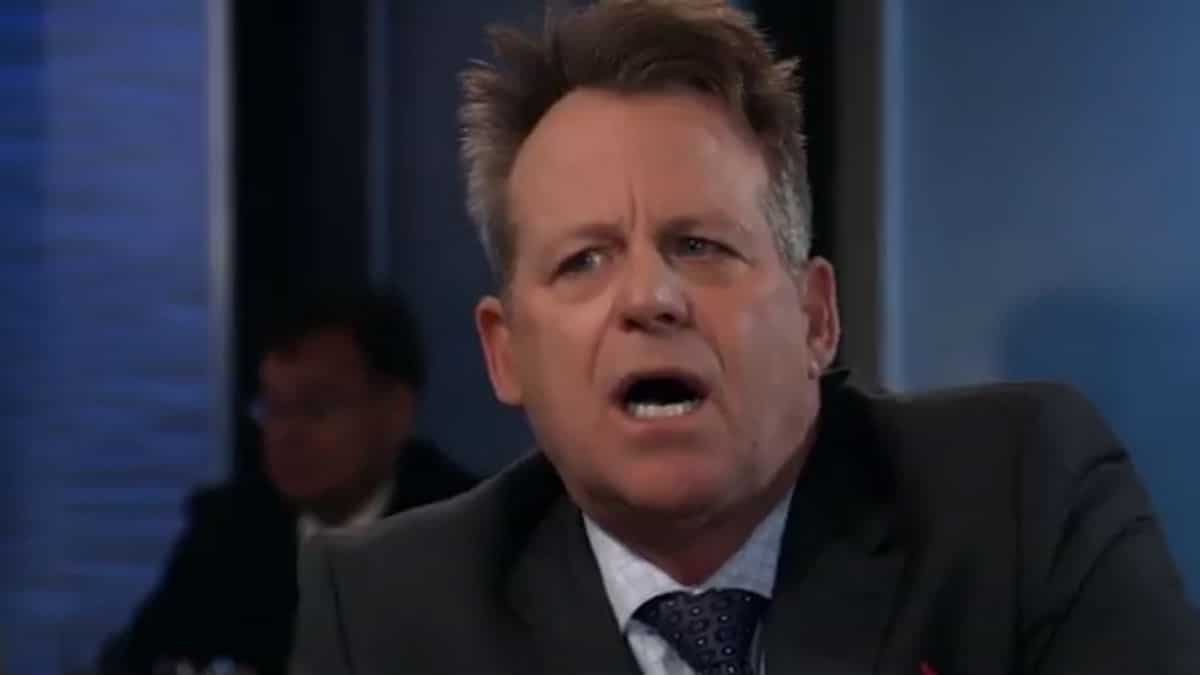 General Hospital spoilers tease that Scott Baldwin (Kin Shriner) will storm off, obviously upset about something, in an upcoming episode of General Hospital!

As General Hospital viewers recall, Scott took on the case of having his son Franco Baldwin (Roger Howarth) declared incompetent, therefore giving his wife Elizabeth Baldwin (Rebecca Herbst) full guardianship over him, to be able to make his decisions for him, basing the case on Franco not being in his right mind. He is however, in pre-2012 Andrew Cain’s (Steve Burton) mind, which is the problem!

Elizabeth wants Franco to have the chance to become himself again, by means of Dr. Andre Maddox (Anthony Montgomery) attempting a memory transfer reversal, removing Drew’s memories and hoping that Franco’s will be layered underneath them in his brain, because no baseline was made of Franco’s memories, although Drew’s were transferred off a baseline of his.

In the meantime, Kim Nero (Tamara Braun) hired Martin Gray (Michael E. Knight) to represent “Drew’s” interests in the competency hearing, and Martin decided to make it an “identity” case, stating that since Franco Baldwin “identifies” as Drew Cain, then he must be allowed to remain as Drew Cain, in spite of his physical DNA being that of Franco Baldwin and his fingerprints, driver’s license, Social Security card, etc! She will also be shocked at something that happens, apparently during this hearing, and make a startling confession, according to other General Hospital spoilers! Perhaps this confession helps Martin Gray win the case!

Other General Hospital spoilers tease that Elizabeth will be distraught, and Scott will have an idea, but then will look for help; perhaps these spoilers relate to Scott losing his case, and Franco being allowed to remain as Drew! Scott certainly would be upset enough to storm out of the hearing, and Elizabeth certainly would be distraught! This all points to Scott losing the case and being defeated by Martin Gray!

Besides, the current political climate favors identity issues – people choosing their gender based on what they want to identify with instead of by what their body looks like, people having sexual reassignment surgery, which would make their birth certificates not match what they have become, and many other groups claiming that what a person identifies as is their true identity!

That is exactly what Martin Gray is banking on for his success in the “Frankendrew” case, and because identity issues are such a hotbed issue, the people making the decisions in this case may be inclined to rule in “Drew’s” favor, as well as citing that the procedure may not work or leave Franco as a vegetable anyway! Martin could also trip up Cameron Webber (William Lipton) on the stand and get him to admit he’d been drugged, discrediting him as a witness, and there are many other things he could do to assure winning his case! He just lost Nelle Benson’s (Chloe Lanier) parole case, but then he worked pro bono for her, so maybe he just didn’t try very hard to win!