General Hospital Spoilers: Who Is Stalking Laura And Ava? 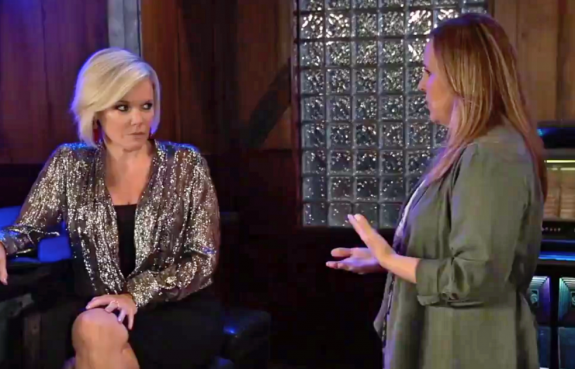 General Hospital spoilers tease that there’s a mystery man – or, it could be a woman – snooping around and watching Mayor Laura Collins (Genie Francis) and Ava Jerome (Maura West) as they were having some good girl talk at the Metro Court in recent episodes of General Hospital!

Ryan Chamberlain Is Ruled Out As Being The Mystery Stalker

Ryan Chamberlain (Jon Lindstrom) can definitely be ruled out as being the mystery stalker, because he was in his prison cell at Pentonville Prison being questioned by Detective Harrison Chase (Josh Swickard) after he killed Bryce Henderson (Brian Gross) for making lascivious remarks about Ava when he saw the Crimson cover, “Midnight In The Garden of Good and Ava” hanging in the cell – which Chase then confiscated, along with Ryan’s pen and writing pads! That could have a side effect that Ava would appreciate – Ryan’s no longer being able to write her letters! She was on target when she told Laura that she could feel Ryan thinking about her, because he definitely was, but he could not be the stalker!

Could Hayden Barnes Be Snooping For A Friend?

Hayden Barnes (Rebecca Budig) works in the same building since Aurora Media’s and Crimson Magazine’s offices are upstairs in the Metro Court. The one person that Laura and Ava have in common, aside from having been involved with twins – Laura married to Kevin Collins (Jon Lindstrom) and Ava having been involved with his twin Ryan, when Ryan was impersonating Kevin – would be Nikolas Cassadine (most recently Nick Stabile, previously Tyler Christopher), which Hayden would also have in common, having been married to him. Laura and Ava also have the two psychics in common, most recently Chelsea Lam (Jen Ray) who Laura tried to bust as a scammer but was unable to when she told her that her son – not the one in Africa, which would be Lucky Spencer (Jonathan Jackson) was in danger, which would be Nikolas!

WATCH: Laura sets some boundaries for Ava to follow as long as she and Kevin are pretending to be an item. @GenieFrancis @MauraWest #GH pic.twitter.com/agsD0dSdTA

Ava was one of the last people to see Nikolas alive, while Hayden was the last woman that Nikolas was involved with romantically. Ava and Nikolas could have gone there, but never had the chance! Since Hayden seems to possibly be in touch with the true heir, which is the reason she and Jasper Jacks (Ingo Rademacher), as well as Laura, have been looking for the codicil to Mikkos Cassadine’s (John Colicos) will, it makes sense that Hayden might be snooping for the true heir, which could be Nikolas, although Jax, Hayden and Laura have discussed his son Spencer Cassadine (Nicolas Bechtel). But Spencer doesn’t have any connection to Ava!

Nikolas Cassadine Himself Cannot Be The Mystery Stalker

Nikolas himself cannot be the mystery stalker, since he would not be intimately familiar with the Metro Court and places to hide in it, and he would be easily recognized. But if he and Hayden encountered each other in Europe, and he knew about the codicil, although he may not have known where it was hidden on Spoon Island, he may have mentioned it to Hayden; he wouldn’t likely have told her its exact location even if he did know, because he knew better than to trust her implicitly! But if the two are in touch, he would have wanted to know what is going on with his mother, and possibly Ava as well.