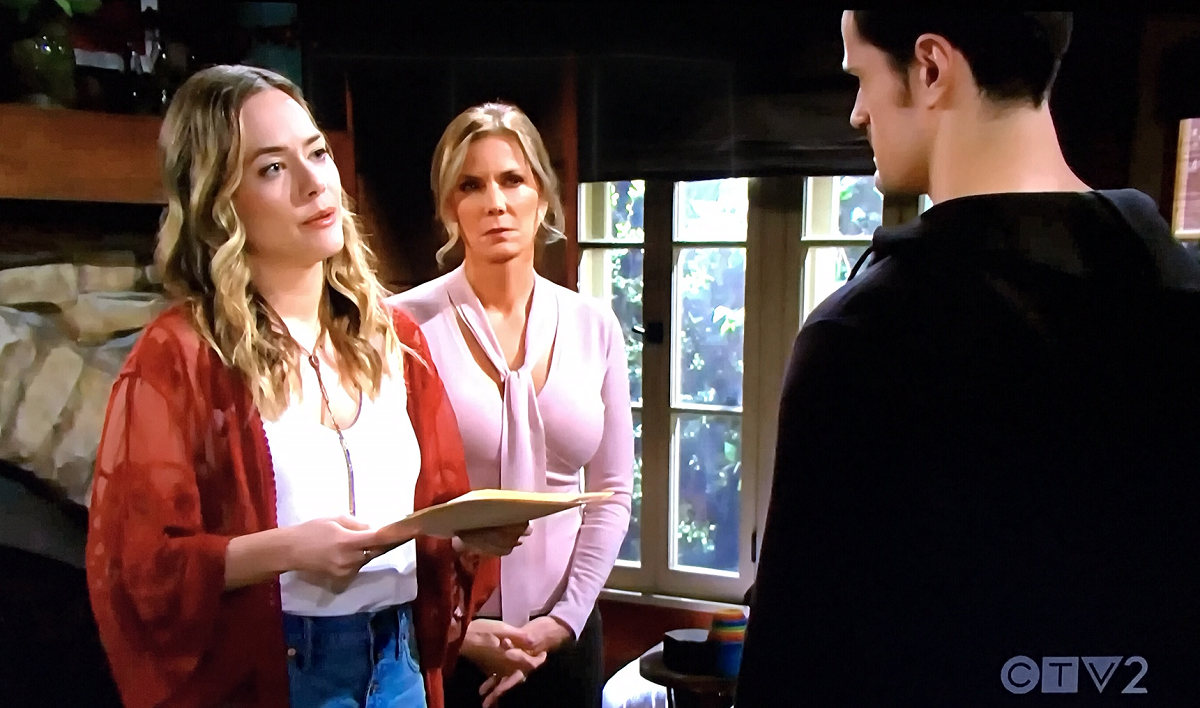 The Bold and the Beautiful spoilers for Wednesday, October 23, tease that Hope Logan (Annika Noelle) will continue her big pitch to Thomas Forrester (Matthew Atkinson). As B&B viewers know, Hope has just implored Thomas to sign paperwork that would terminate his parental rights so that she can raise Douglas Forrester (Henry Joseph Samiri) with Liam Spencer (Scott Clifton).

This came after Brooke Forrester (Katherine Kelly Lang) presented Thomas with a folder containing adoption and termination-of-parental-rights papers. Thomas was totally taken aback by the move and doesn’t look like he’s even going to consider signing away the rights to his son, even after Hope pointed out that he always wanted her to be a mother to Douglas.

B&B viewers should expect to see Thomas vehemently refuse to sign the paperwork. He’s pretty determined to get Douglas back, plus he’s very much against anything having to do with the Logans. As B&B viewers know, Thomas desperately wants to rid his family and his family’s company of the Logan women altogether. There’s just no way that he is going to stand for the Logans trying to take his son away from him.

Bold And The Beautiful Spoilers – Thomas Forrester Will Soon Get Backup

But at the moment, Thomas is going against Brooke and Hope on his own, without any moral support. Ongoing B&B spoilers say that Thomas will soon get some backup from his dad Ridge Forrester (Thorsten Kaye). Within the next couple of episodes, Ridge will learn that Brooke is the person who has spearheaded the effort to take Douglas away from Thomas, and he’s going to be outraged.

But in the meantime, on Tuesday’s new episode of B&B, Ridge will spend some time with Steffy Forrester (Jacqueline MacInnes Wood). Ridge has been trying very hard to get Steffy and Thomas back on the same page, but it’s been difficult, since Steffy absolutely refuses to forgive Thomas. As B&B viewers know, she’s deeply upset with Thomas over his role in the Beth Spencer (River Davidson and Madeline Valdez) lie.

Yet Ridge will do his best to coax Steffy into forgiving her brother. And since they’ll be discussing Thomas, it looks like the issue of Douglas and his well-being will come up as well. B&B viewers will remember that Steffy recently had a major argument with Hope, during which Hope indicated that she wanted Douglas to be part of her family with Beth and Liam. That really surprised Steffy, who thought it was odd that Hope would just assume that she’d get to raise Douglas.

Steffy may convey the details of her argument with Hope to Ridge, and B&B spoilers say that Ridge will assure Steffy that Douglas will remain with Thomas, no matter what. It seems that Ridge assumes that Brooke’s ideas about Thomas giving up custody of his son was all talk. But he’ll soon find out that Brooke was very serious about the whole thing, when he discovers that she had papers drawn up to facilitate an adoption of Douglas to Hope and Liam.

It seems that all of this is leading to a big war between the Logans and the Forresters. The issue of Douglas’ custody is likely going to be the breaking point that ignites the war. Expect to see sides taken along family lines once Ridge finds out that Brooke has spearheaded the effort to coerce custody of Douglas away from Thomas.