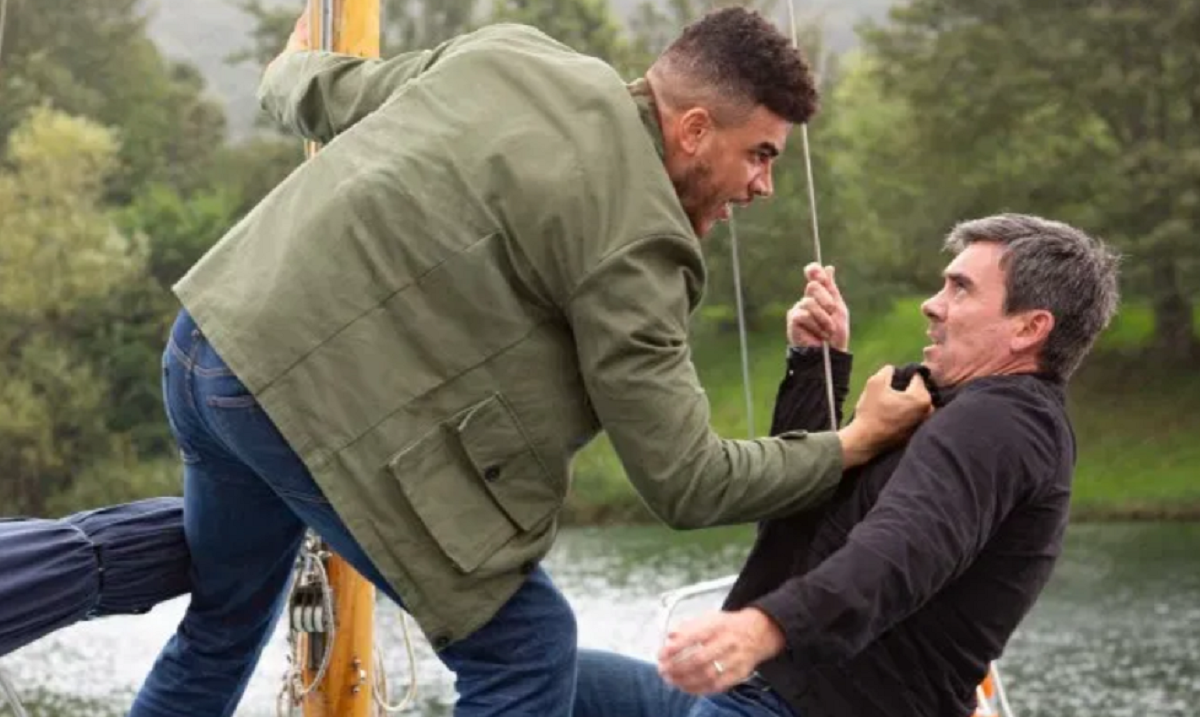 Emmerdale spoilers reveal Cain Dingle (Jeff Hordley) and Nate Robinson (Jurell Carter) get into a vicious battle. Moira Dingle (Natalie J. Robb) tries to break the feuding men apart. While doing so, she gets knocks off the fishing boat and trapped underwater. Meanwhile, a can of petrol gets knocked over, which causes an explosion on the watercraft.

Nate and Moira’s affair is now exposed to Cain. The betrayed husband didn’t realize it was Nate at first. This is due to him getting some incorrect information from his mother, Faith Dingle (Sally Dexter). She is accurate about Moira sleeping with someone else. However, she tells Cain the guilty party is Pete Barton (Anthony Quinlan).

Unfortunately, Cain attacks Pete before realizing that the man is innocent.

Cain decides to lure the forbidden lovers on a fishing boat. Moira is suspicious of Cain’s upbeat demeanor. However, she humors him and Nate agrees to attend the outing. What Nate and Moira don’t know is that Cain stashes a can of fuel on the boat.

Later, Cain confronts the man who is sleeping with his wife. Nate doesn’t deny it. In fact, he pushes Cain’s buttons by going into intimate detail. Then, the two men get into a vicious brawl. Moira is elsewhere on the boat and hears ruckus. When she goes to investigate, she finds the two men trying to kill each other.

Emmerdale spoilers tease that Moira tries to break up the fight. However, she just gets in the way and she is knocked overboard. At some point, she ends up trapped underwater. However, there is more drama and danger ahead.

As Moira is in the water, Cain and Nate continue to battle one another. During the scuffle, a can of petrol spills over. Next thing you know, there is an explosion and the boat is engulfed in flames.

Now the question is, can Moira be saved from the water or will she die? Fans are also wondering if Cain and Nate will end up succumbing to injuries from the blast. Judging by the preview photos posted on Emmerdale’s official website, the whole boat is covered with flames. If there are survivors, they would be very lucky.