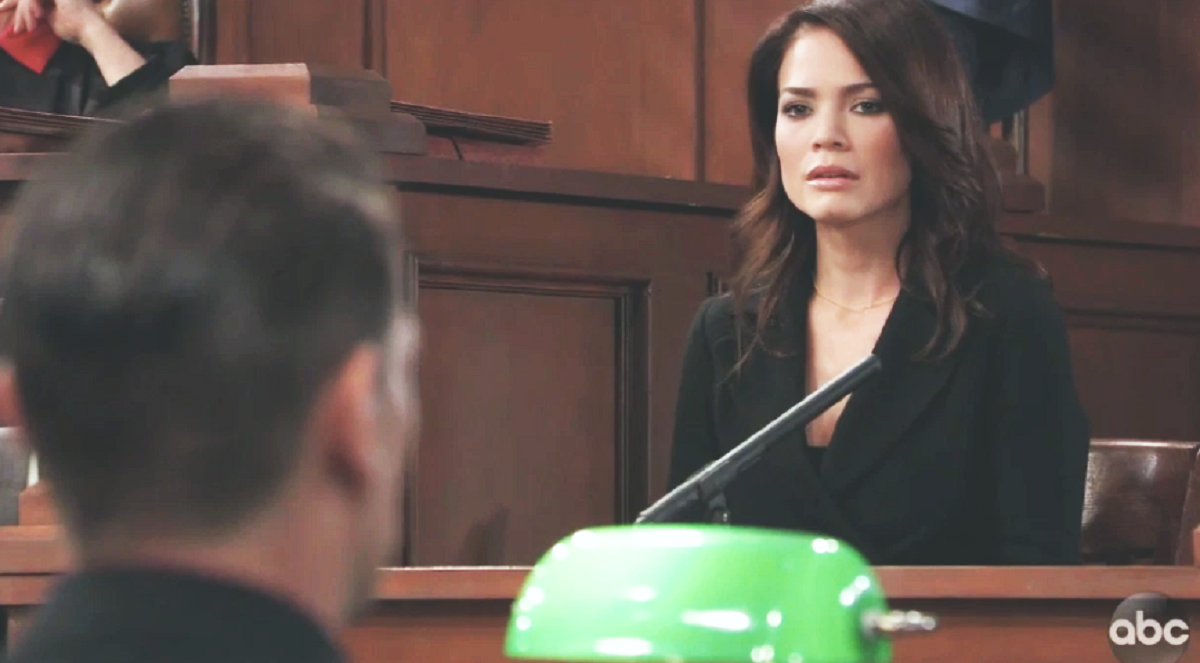 Cameron tells the court Franco’s last words. Martin questions Cameron. Franco stops Martin from badgering Cameron. Franco assures Cameron that none of this is his fault. Liz takes the stand and gives her statement. Liz says she is going to stand by her man, she wants him to be ok. Martin brings up what Liz did to Drew.

General Hospital’s Jason Morgan (Steve Burton) and Danny Morgan (Porter Fasullo) are at Kelly’s. Jason asks Danny if he and Scout Morgan (Ella Ramacieri) are ok at Monica’s for the week. Jason explains to Danny that Sam McCall (Kelly Monaco) has to stay in Pentonville until her trial. Danny says he and Scout are ok. Monica Quartermaine (Leslie Charleston) arrives and sends Danny to get her some coffee and a donut. Jason thanks Monica for letting the kids stay there.

Monica tells Jason about the black box from Drew’s plane being found. Monica wanted Jason and Drew to get closer. Monica wants to spend more time with Franco. Jason is upset with Monica’s idea. Danny takes his time picking out the donuts. Jason wishes he could do half the job Monica did with him. Jason understands why Monica wants to know about Drew’s childhood.

Monica wants to go to the hearing to speak up for Franco. Jason hopes Franco can help him save Sam. Jason tells Monica that Franco isn’t Drew at all. Jason tells Monica it is her business if she wants to have a relationship with Franco. Danny brings Monica a donut and her coffee. Danny wishes he could get his mom a cupcake.

General Hospital’s Michael Corinthos (Chad Duell) and Josslyn Jacks (Eden McCoy) are getting ready for their little sister to arrive home. Michael has got Donna Corinthos (Ella and Emma Hulen) a cup that she can pass down through the family. Jocelyn tells Michael he can always count on her. Michael has Jocelyn to help hang a banner for the baby.

General Hospital’s Sonny Corinthos (Maurice Benard) and Carly Corinthos (Laura Wright) are at the hospital to pick up Donna. Sonny needs to sign another form before leaving. Carly promises to call Bobbie Spencer (Jackie Zeman) if she needs a nurse. Bobbie is worried that Carly could be getting postpartum depression. Sonny returns ready to leave with the baby.

Sonny and Carly arrive home with the baby. Everyone argues over who is going to hold the baby first. Carly is surprised over the cup Michael has passed down. Jocelyn wants to write about the day in her journal. Jocelyn wants quotes from everyone about the baby. Avery Corinthos (Ava and Grace Scarola) comes downstairs to see the baby. Sonny and the rest of the family tell Avery what she will have to do to help take care of Donna.

Carly gives Avery a doll to take care of. Bobbie takes a picture of the family. Jason arrives and Avery takes him to see the baby. Jason gets a call to testify at Franco’s hearing. Martin points out that Liz tried to keep Drew from learning his true identity. Liz admits to keeping Drew’s past from him. Liz admits to acting in the name of love.

General Hospital’s Hayden Barnes (Rebecca Budig) tells Hamilton Finn (Michael Easton) that is her daughter he has come to treat. Finn question if it is his daughter too. Hayden admits that it is his child. Finn goes inside the room and meets Violet Finn (Jophielle Love). Epiphany Johnson (Sonya Eddy) is with Violet as well.

Finn is stunned to be looking at the child he thought had died. Hayden joins Finn with their daughter. Finn asks Hayden to leave while he examines Violet. Finn talks to Violet and asks her if she can help. Finn lets Violet listen to his heartbeat. Finn tries to set Violet at ease before talking to Hayden. Hayden wants to know what is wrong with Violet.