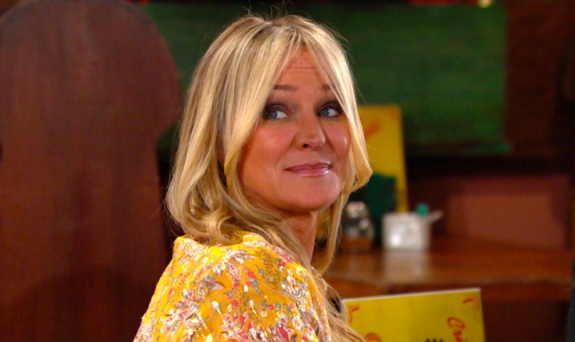 The Young and the Restless (Y&R) spoilers for Friday, October 25, tease that Chelsea Newman (Melissa Claire Egan) will struggle without Connor Newman (Judah Mackey). At home, Chelsea opens up to Nick Newman (Joshua Morrow) about how painful this is. She adds that she’s going to discuss visitation with Adam Newman (Mark Grossman) and is nervous about seeing her own son.

At Crimson Lights, Adam finds Sharon Newman (Sharon Case) and wants her to keep helping Connor. Sharon gets updates on Connor’s new living arrangements and is uncertain about continuing. She knows it’d put her closer to Adam, which could lead to manipulation. Adam urges Sharon not to let her feelings toward him influence her decision. He hopes Sharon will change her mind for Connor’s sake.

Rey Rosales (Jordi Vilasuso) appears in time to catch Adam and Sharon talking. He approaches Sharon and wonders what that was about. Sharon brings Rey up to speed and admits she turned Adam away. Rey surprises Sharon by suggesting she should reconsider. This is about what’s best for Connor. Rey feels confident that Sharon has seen Adam for who he really is, so he’s not concerned.

At Adam’s penthouse, Chelsea speaks with Adam about Connor and how it’ll take time to get past the trust issues. Adam encourages Chelsea to visit Connor whenever she wants, but he does have a favor to ask. Since Connor’s been feeling yanked around lately, Adam doesn’t want Chelsea mentioning the idea of going back to Nick’s place.

Later, Chelsea reconvenes with Nick and is upset about the promise she made. She cries about telling Connor he didn’t have to come home and wonders what she’ll do without her little boy. Back with Sharon, she calls Adam and lets him know Rey talked her into being there for Connor.

At Devon Hamilton’s (Bryton James) penthouse, he greets Lily Winters (Christel Khalil) and tells her all the recent developments. Devon mentions that Amanda Sinclair (Mishael Morgan) looks exactly like Hilary Hamilton (Mishael Morgan) before talk turns to Cane Ashby (Daniel Goddard). After Devon expresses concerns about Cane’s trustworthiness, he wonders what Lily thinks. Lily suggests that Devon will have to let his heart guide him.

Young And The Restless Spoilers: Jill Abbott Arrives At The Penthouse

Next, Jill Abbott (Jess Walton) arrives at the penthouse with Cane. Amanda also files in and leaves Lily floored. Once Lily gawks and drops a glass, she gets her wits about her again and offers Amanda an apology. Devon eventually declares that he’s decided he can do one of two things: give Cane the money or donate it to charity. He explains his reasons and determines that he’ll keep Hamilton-Winters, but Cane can have the bulk of Katherine Chancellor’s (Jeanne Cooper) fortune.

Amanda agrees to take care of all the legal documents. Jill feels certain Katherine and Neil Winters (Kristoff St. John) would be proud of Devon’s choice. Cane also speaks with Devon alone and offers his gratitude. He assures Devon that he’ll do his best to honor Katherine’s legacy.

At Society, Cane chats with Lily about Devon’s lack of trust. He knows the expectation is that he’ll mess up, but he’ll plan to prove everybody wrong. Cane wonders if Lily could stick around and help him navigate his new wealth, but she’s got a job to get back to. They say their goodbyes shortly before Jill calls with a bombshell. An emblem on the envelope has tipped her off to trouble. It reminds Jill of one from the Maldives, where Colin Atkinson (Tristan Rogers) was at. She fears this is just the kind of con he’d run.

At the Grand Phoenix, Devon finds Amanda and lets her know she’s sorry for any harsh things he said. Amanda has high praise for Devon now that it’s all been settled. She’s sorry as well for causing heartache, so they shake hands and bid each other farewell.

The Young and the Restless spoilers say more twists and turns are ahead. We’ll keep you posted as other Y&R news and rumors emerge. Stay tuned to see what else is coming up in Genoa City.