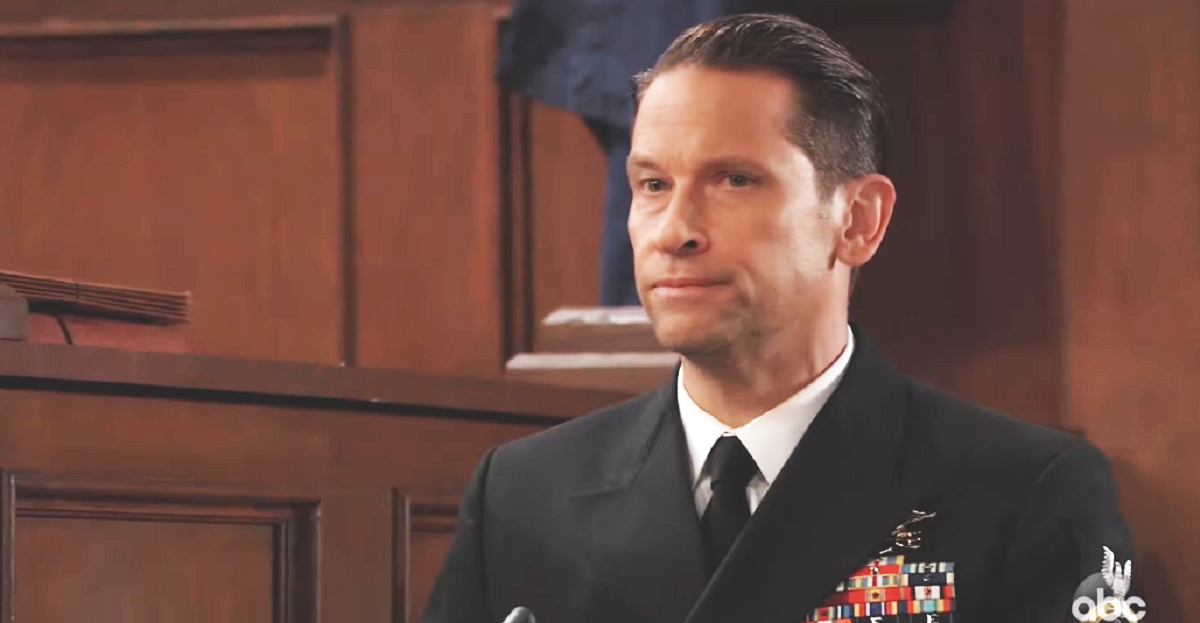 Valentin wants to pick up some things and go to Paris. Nina gets a box of champagne from Spencer Cassadine (Nicholas Bechtel). Nina’s secretary offers to send the champagne back but she refuses.

General Hospital’s Laura Webber (Genie Frances) and Kevin Collins (Jon Lindstrom) discuss Helena Cassadine’s (Constance Towers) portrait. Laura tells Kevin who the artist is that did the painting. Laura needs to find the painting immediately. Kevin is going to the hearing and invites Laura to go. Laura says Liz doesn’t want her there. Valentin wants Laura to handle Spencer or he will. Laura suggests Valentin is threatening Spencer, he denies it. Nina makes it plain to Ava that she is nobody’s fool.

General Hospital’s Trina Robinson (Sydney McKayla) and Ava Jerome (Maura West) are at the art gallery. Trina and Ava discuss how spooky Helena’s portrait is before putting it in the back. Valentin appears at the gallery and wants the portrait. Valentin claims it is a family portrait and belongs to himself, Nina, and his daughter. Ava tells Valentin he’s not getting what he wants and walks out leaving Trina alone. Ava speaks to Nina and tries to convince her that Valentin was in on Sasha Gilmore’s (Sofia Mattsson) plans.

General Hospital’s Jason Morgan (Steve Burton) and Diane Miller (Carolyn Hennesy) are visiting Sam Mcall (Kelly Monaco) at Pentonville. Sam tells Diane that her cellmate assaulted another prisoner and wants out before the cellmate returns. Diane doesn’t think it looks good. Diane suggests a bench trial might get Sam released faster. Jason doesn’t trust a bench trial but Sam wants to get home to the kids. The judge agrees to the bench trial.

General Hospital’s Peter August (Wes Ramsey) is ignoring Maxie Jones (Kirsten Storms) while looking at updates on Franco Balwin’s (Roger Howarth) trial. Maxie wants to know why Peter is so invested in the trial… Lucy Coe (Lynn Herring) interrupts promising to make his dreams come true. Lucy has the condo Peter was wanting but he refuses to take it. Maxie wants to talk to Peter to convince him otherwise.

In the courthouse, General Hospital’s Scott Baldwin (Kin Shriner) asks of Kim Nero (Tamara Braun) if she drugged Drew Cain (Billy Miller) to have a child with him. Kim admits to drugging Drew. Peter claims to be doing an article on the trial Meanwhile Scott accuses Kim of wanting Franco to be Drew so she can have child with a dead man. Martin accuses Scott of badgering the witness. Franco asks Scott to stop and hugs Kim. Liz Baldwin (Rebecca Herbst) berates Scott for being so brutal.

Franco takes the stand and defends Kim. Liz remembers something she believes is significant. Scout points out that Franco was in Turkey in July of 2010. Franco does not remember those events. Martin waits for Kevin to testify. Kevin arrives and tells them Franco is in complete control. Scott wants Kevin to be considered a hostile witness. Kevin doesn’t agree with Liz being Franco’s proxy. Franco’s judge deems him competent.