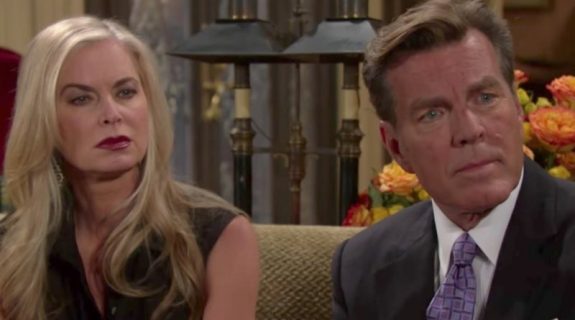 The Young and the Restless spoilers for Monday, October 28, tease that Nick Newman (Joshua Morrow) and Mariah Copeland (Camryn Grimes) will catch up at Crimson Lights. They’ll discuss the situation going on with Connor Newman (Judah Mackey) and Adam Newman (Mark Grossman). Mariah will indicate that she’s sure he’ll stand up for the ones he cares about.

As they’re talking, Councilwoman Tammy Diamond (Gillian White) will come along and remark on all the good that Nick could do in Genoa City. Mariah will want to know what that was all about, and Nick will spill that there’s a little movement trying to get him to run for public office. He’ll say that he likes the job he has, so he’s not going to do it.

Next on Y&R, Jack Abbott (Peter Bergman) and Traci Abbott (Beth Maitland) will talk with Dina Mergeron’s (Marla Adams) old friend “Doris” (Mary-Margaret Lewis). After some cajoling, Doris will tell them the story of how Dina was dating John Abbott (Jerry Douglas) in high school, then had a one-night stand with Stuart Brooks (Robert Colbert) on prom night. Afterwards, Dina went off to Europe for a year.

Traci will quickly figure out that Dina was pregnant, and after Doris leaves, Traci will look through some of Dina’s things and find a decree of adoption for a boy, with Dina listed as the mother but no father listed. Turns out, the boy’s name was “Eric Vanderway” and he was raised by a couple named Ralph and Margaret Vanderway. Jack and Traci will realize that they have a half-brother.

Next on Y&R, Theo Vanderway (Tyler Johnson) and Summer Newman (Hunter King) will chat at Society. Theo will be upset about some clients dumping him, and Summer will give him a pep talk. Across the restaurant, Kyle Abbott (Michael Mealor) will talk with Mariah about married life, and soon Summer and Theo will join them, which will be awkward. Theo will buy a round of drinks as a gesture to make things right with Kyle and Mariah.

A counterfeit will forces a choice that shocks everyone. Don’t miss it this week on #YR! pic.twitter.com/Qbcl2efesw

Next on Y&R, Adam and Chelsea Lawson (Melissa Claire Egan) will chat about Connor. She’ll think he’s acting awfully fair and will wonder why. She’ll then go off to say goodbye to Connor, when Billy Abbott (Jason Thompson) arrives. The men will bicker like they normally do, then Adam will ask Billy to admit that he tried to run him down with a car. Ultimately, they’ll decide to just move on with life and stay out of each other’s way.

Finally, on Monday’s new episode of Y&R, Chelsea will head home to Nick, who will tell her that Tammy called and that she wants him to run for city council. Chelsea will wonder if he’d like to do it, but Nick will admit that he’s feeling ambivalent about the whole thing. But Chelsea thinks that it would be a great fit for him. Ultimately, she’ll urge him to call Tammy, and he’ll note that if he does this, then his life will be up for public scrutiny.