The Bold and the Beautiful Spoilers: Hope’s Life Not the Only One in Danger – Could Douglas Get Caught in Crossfire? 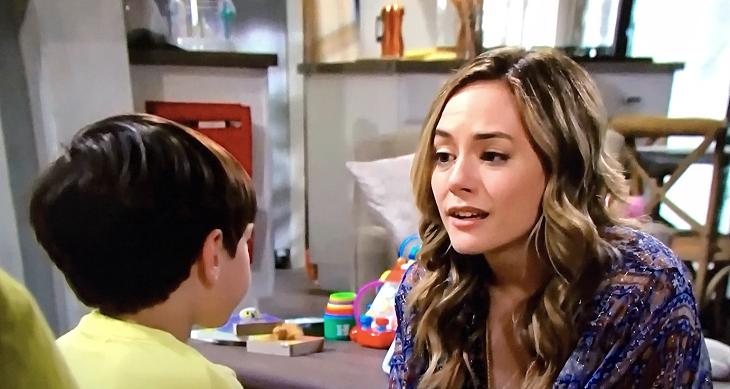 The Bold and the Beautiful spoilers reveal that Hope Logan’s (Annika Noelle) life might not be the only one in danger. What exactly happens with Thomas Forrester (Matthew Atkinson) and custody of his son? Could little Douglas Forrester (Henry Joseph Samiri) end up getting caught in the crossfire?

B&B spoilers tease that while trying to get custody of Douglas, Hope could find herself in danger. She and her mother, Brooke Logan Forrester (Katherine Kelly Lang) keep pushing the custody issue. This will happen even after Ridge Forrester (Thorsten Kaye) stands up for his son.

He told his wife, as well as Hope and Liam Spencer (Scott Clifton) to back off. Ridge was angry and shocked by their actions. He risked his entire marriage to back up Thomas and make sure nobody takes Douglas away from him.

Bold And The Beautiful Spoilers – Does Thomas Forrester Have His Own Plan?

The Bold and the Beautiful spoilers reveal that Hope will come up with a plan to finally get Thomas to sign the papers. At least, that is what she is being led to believe.

However, it requires that she spend time alone with Thomas. This concerns Liam and Brooke, but they can’t stop Hope from going after what she wants.

Could Thomas have a plan to make Hope pay for trying to steal Douglas?

It is teased that Hope’s life won’t be the only one in danger. Someone else ends up being at risk due to Thomas and Hope’s custody battle. It wasn’t revealed who, but it could be any number of people. Perhaps Liam goes to rescue Hope. Maybe Brooke decides to go after Thomas. Or it might be a more innocent character that is in danger.

B&B spoilers suggest that Thomas and Hope might not be totally alone in the upcoming scene. Perhaps Douglas is also there. If so, and if things get intense, could the child’s life be in jeopardy? Could he end up getting caught in the custody crossfire?

The Bold And The Beautiful (B&B) Spoilers: Here’s Why Finn Is Perfect For Steffy

The Bold And The Beautiful (B&B) Spoilers: Bill Tries To Protect Liam, But Will…

The Bold And The Beautiful (B&B) Spoilers: Quinn’s Dangerous Prank –…

The Bold And The Beautiful (B&B) Spoilers: Zende’s Date With Paris…