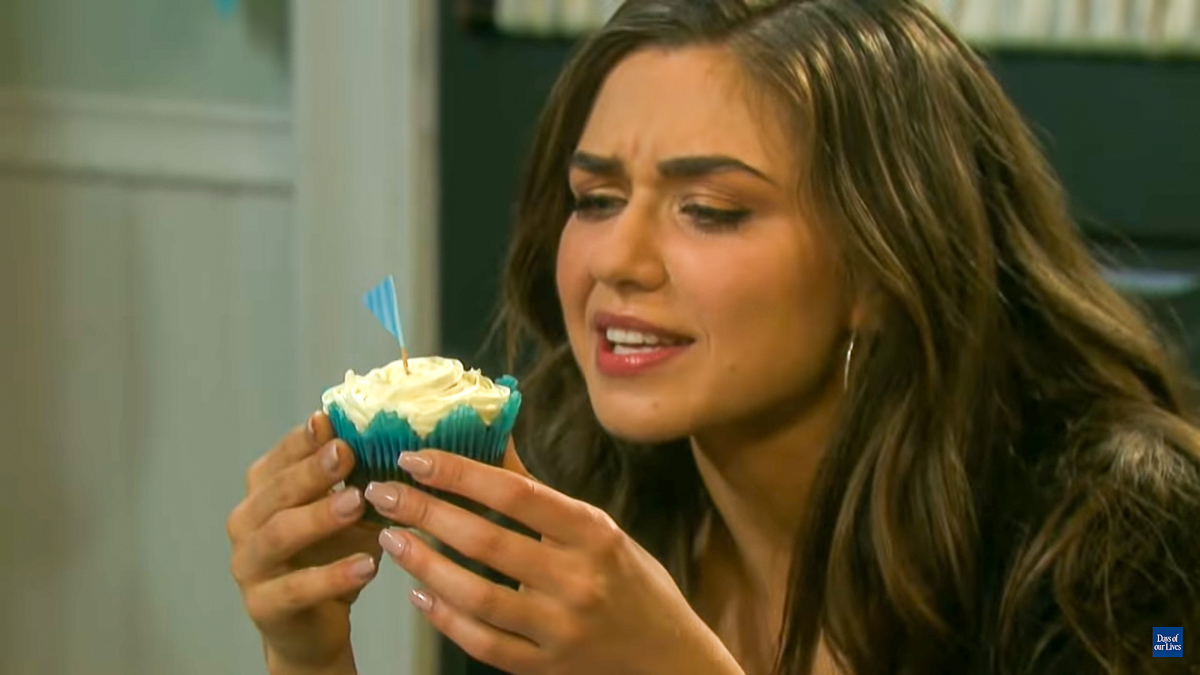 Days of Our Lives spoilers for Monday, October 28 through Friday, November 1 tease another exciting week of drama and tense situations among the Salemites, with mayhem and murder on Halloween! Days of Our Lives viewers should hang on to their seats!

The Days of Our Lives weekly preview shows there’s an app for everything, as Gabi Hernandez DiMera (Camila Banus) threatens to use it on Julie Williams’ (Susan Seaforth Hayes) pacemaker! Viewers will recall in Friday, October 25th’s episode that Gabi proved to Lani Price (Sal Stowers) that she could control Julie’s newly installed pacemaker with an app on her phone, procured from Visionary Bionics, the same company that made Steve Johnson’s (Stephen Nichols) bionic eye! In the video, Gabi tells Lani that the app can do much more than just raise or lower Julie’s heart rate, and although Eli Grant (Lamon Archey) is shown in the beginning of the video at he and Lani’s wedding, saying this day is going to be absolutely perfect, it will be anything but! Gabi tells Lani she has to dump Eli at the altar or she will use the app to blow Julie’s heart to smithereens – kaboom! Gabi sits among the wedding guests, her phone at the ready to blow Julie’s heart up if Lani doesn’t comply!

Monday, Ciara Brady (Victoria Konefal) will find incriminating evidence in Ben Weston’s (Robert Scott Wilson) coat pocket – the little brown bottle that Jordan Ridgeway (Chrishell Hartley) poured poison into one of the cupcakes she made for her baby David Ridgeway’s (Jaxton and Dexter Ellis) first birthday party. She realizes her plan claimed an unintended victim when Rafe Hernandez (Galen Gering) passed out in the kitchen in Friday’s episode, which continues on Monday. He will be rushed to the hospital. Also on Monday, Gabi proves to Lani that she’ll make good on her threat, Haley Chen (Thia Megia) will tell John Black (Drake Hogestyn) and Marlena Evans (Deidre Hall) about her strange encounter with Hope Brady (Kristian Alfonso), Hope will tell Dr. Wilhelm Rolf (William Utay), as Princess Gina, that she’s anxious to be reunited with John, and Julie thanks Gabi for donating her late husband Stefan DiMera’s (Brandon Barash) heart so Julie could live.

Tuesday, Jordan attacks JJ Deveraux (Casey Moss) after Rafe becomes suspicious that Jordan has poisoned him. He shares his suspicions with JJ who heads out to investigate. Also on Tuesday, Jack Deveraux (Matthew Ashford) and Jennifer Horton (Melissa Reeves) will enjoy a romantic evening at the Salem Inn, John and Marlena will confront “Hope”, and then Jack and Jennifer have a tense run-in with Rolf; Jennifer likely still has his flash drive and won’t want to give it up!

Wednesday, Ciara will play cat and mouse with Jordan, who has shown up at the gatehouse while she’s there alone, Ben having gone to the hospital with the bottle. Jordan tries to convince Ciara that Ben is responsible for the poisoning and tries to convince her to leave with her and baby David, who Jordan has with her. Ben arrives home, confronts Jordan about the poisoning, and Jordan bolts with the baby. Ben runs after them! Later, he comes back with the baby, but no Jordan! Also on Wednesday, Xander Kiriakis (Paul Telfer) overhears Nicole Walker (Adrienne Zucker) say that Eric Brady (Greg Vaughan) might still have feelings for Sarah Horton; he then needles her about what he overheard. Lani tries to outmaneuver Gabi.

Thursday, it’s Halloween in Salem, and Jordan breaks Claire Brady (Olivia Rose Keegan) out of Bayview to wreak havoc on Salem, and Ben gives in to his dark side! Will he take care of the problem of his sister for good? Also on Thursday, Tony DiMera (Thaao Penghlis) has a startling revelation for Marlena!

Friday, Maggie Kiriakis (Suzanne Rogers) and Xander try to change Sarah’s mind, as she is still intent on moving out of Salem and neither her mother, Maggie, nor her would-be lover, Xander, want her to leave town. Also, Xander is thrown when Hope doesn’t recognize him; he knows there’s something very wrong with that picture! Also on Friday, Jack goes to the courthouse to get a marriage license for himself and Jennifer, it’s Lani and Eli’s wedding day, and Lani suggests a compromise to Gabi.