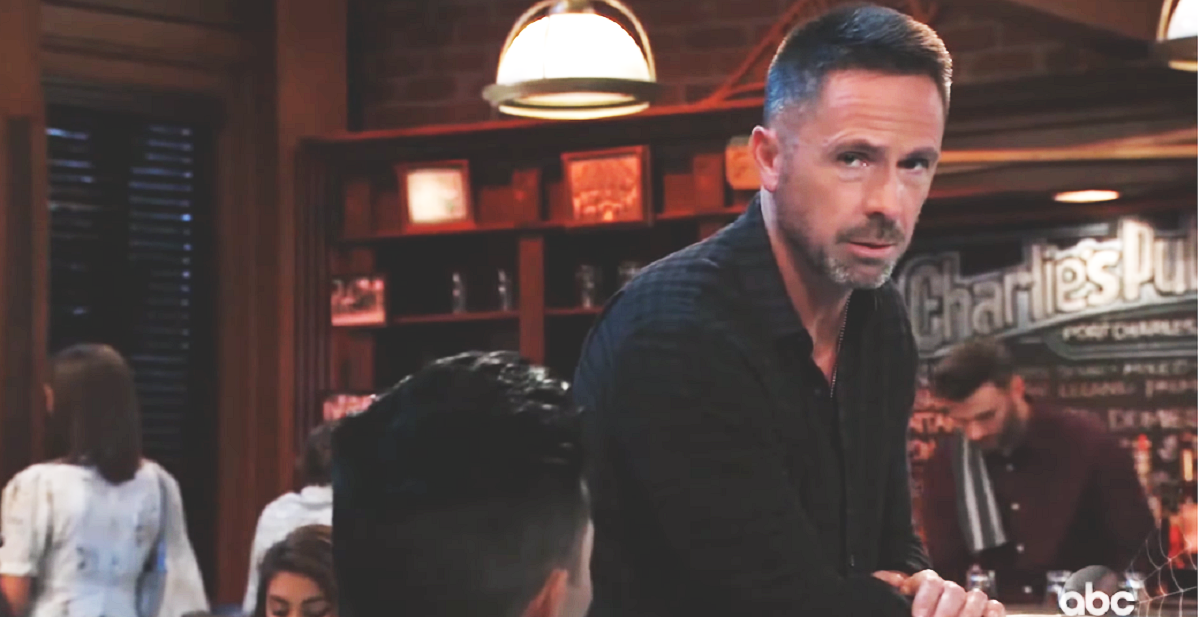 Michael doesn’t think that is a good idea. Chase and Michael spar and both end up on the floor. Michael apologizes for being so rough on Chase. Chase might have to reschedule his date night. Chase is thinking about kids with Willow. Trina Robinson (Sydney McKayla) and Cameron Webber (William Lipton) go to the gym so he can work off some frustration. Cameron punches the bag until he can’t anymore. Trina holds Cameron has he cries.

General Hospital’s Willow Tait (Katelyn MacMullen) is at Charlie’s with Wiley Cooper Jones (Theo and Erik Olson). Julian Jerome (William DeVry) takes that baby and demands to know why Willow has him. Willow tells Julian she is babysitting for Brad Cooper (Parry Shen) and Lucas Jones (Ryan Carnes). Willow tells Julian that Brad and Lucas are at an appointment.

Julian pushes Willow to give him the number to reach Brad and Lucas and calls Neil’s office. Julian thinks Brad and Lucas are making a mistake. Julian compares a therapist to a madman like Ryan Chamberlain (Jon Lindstrom). Brad and Lucas arrive to pick up Wiley. Julian asks about their evening. Lucas goes to change the baby. Brad gets a text from Liesl Obrecht (Kathleen Gati). Julian tells Brad that Willow was asking questions about his and Lucas’ relationship. Julian continues to manipulate Brad and Lucas.

General Hospital’s Brad Cooper (Parry Shen) and Lucas Jones (Ryan Carnes) are waiting for Neil Byrne (Joe Flanigan). Neil invites them into his office. Lucas tells Neil that Brad seems to deflect a lot. Lucas tells Neil how upset Brad has been since they got Wiley. Lucas thinks Brad is keeping something from him. Lucas feels abandoned and betrayed because of Brad’s actions. Lucas wants to know why Brad is friends with Nelle. Lucas thinks that Brad has lost faith in her. Lucas wants their relationship back to the way it was.

General Hospital’s Sonny Corinthos (Maurice Benard) needs to speak to Laura Webber (Genie Frances) about Scott Baldwin (Kin Shiner). Sonny hopes that Franco’s personality is gone for good. Sonny tells Laura that Scott wants him to get involved and he doesn’t want to. Laura feels sorry for Franco and what has happened to him. Sonny understands how Liz Baldwin (Rebecca Herbst) must feel. Laura wants Sonny to look at this from a father’s point of view.

General Hospital’s Franco Baldwin (Roger Howarth) is about to learn his fate from the judge. The judge says she has to agree with the expert witness and deem Franco in sound mind. Franco has the right to choose whether or not to undergo a procedure that could end his life. Cameron Webber objects and the judge shuts him down. Franco is released from Shadybrook. Franco takes Kim Nero’s (Tamara Braun) hand, she welcomes him to the rest of his life. Martin Grey (Michael E. Knight) approaches Franco who asks if there is anything he needs to do now. Martin tells Scott that it was fun and leaves.

Kim and Franco approach Scott. Kevin Collins (Jon Lindstrom) tries to intervene and Scott punches him. Scott says Kevin tanked his case. Laura promises Scott will have no more support from him. Franco tells Liz they need to accept this is how things are now. Laura tries to get Liz to leave the courthouse. Liz has to do something first. Liz tells Franco he can’t leave without saying goodbye first. Liz and Laura go to Charlie’s. Scott approaches Sonny to call in a favor. Franco doesn’t know what to do with his victory.

General Hospital’s Alexis Davis (Nancy Lee Grahn) is with Kendra Lennon (Michelle Argyris) discussing her program. Kendra tells Alexis she seems to be so put together. Kendra mentions that her brother was taken way too soon. Sonny joins Alexis and they discuss Sam. Alexis blames Sonny and Jason for Sam being in prison. Sonny tells Alexis she is being unfair and advises her to keep up with her workouts, it’s helping. Kendra says it is so nice how close Alexis is with Sonny. Alexis gets a phone call after Kendra drugs her drink more. Kendra takes the new bottle of supplement to Alexis and leaves.

So stay tuned to General Hospital weekdays on ABC! And you can always check back here often for all your General Hosptial news, information and spoilers!