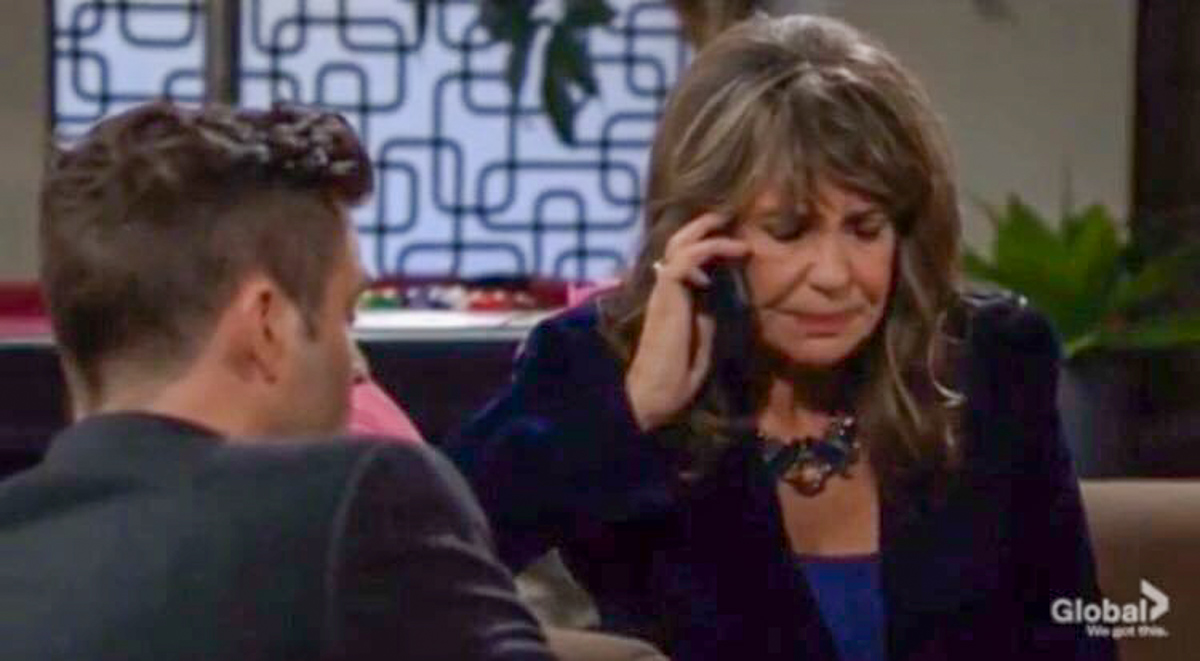 The Young and The Restless spoilers tease that Jill Abbott Atkinson (Jess Walton) strongly suspects that her estranged husband, Colin Atkinson (Tristan Rogers) is behind the business surrounding Katherine Chancellor’s (Jeanne Cooper) will!

Y & R viewers will recall that Jill and Cane Ashby (Daniel Goddard) were talking over the will and about Devon Hamilton (Bryton James) having given the rest of the monetary part of the estate that hadn’t already been spent of donated to Cane. Devon kept Hamilton-Winters, which he had started with some of the inheritance, and Cane agreed that seemed fair. He still couldn’t quite believe it wasn’t too good to be true, when Jill recognized a logo on the envelope that the two authenticated pages of the will that named Cane as the true heir were in; it was stationery from a hotel in the Maldives, which she and Colin were going to go to when things went south between them, and she said it was just like something Colin would do! She told Cane she was going to track Colin down. Other Y & R spoilers tease that Cane might go on the hunt for his father as well!

Longtime Y & R viewers will recall that Colin is a con man, who was heavily involved with the Australian Mafia. He arrived in Genoa City in 2010, fresh out of prison. Colin had become acquainted with Jill, who is Cane’s adoptive mother, without knowing Colin was his birth father and gave him too much information about Cane. When Cane found out Colin was in town, he became very uneasy, especially when Colin threatened to give too much information about Cane and his own past to Jill and Lily Winters (Christel Khalil). Cane was mortified when Colin showed up at a family dinner, having been invited by Jill! Eventually, Colin and Jill became involved and got married. Colin eventually left town, and hasn’t been seen since 2017, although Jill suspects that he spends a lot of time at the hotel in the Maldives!

Over the few years that Jill and Colin were married, she became very familiar with the kinds of con jobs that Colin would pull, and she smelled a rat named Colin the minute she recognized that hotel logo. She couldn’t be sure why he drug Cane into it but she wouldn’t be surprised if Chance Chancellor (John Driscoll) was not involved at all in this, and neither would she be surprised if Colin had knocked out Cane and shut him up in the storage garage; she suspects that Colin will somehow try to con Cane out of his money once he has it in hand, and she cannot let that happen, so she hopes to hunt him down and put a stop to his con before Cane finds him!