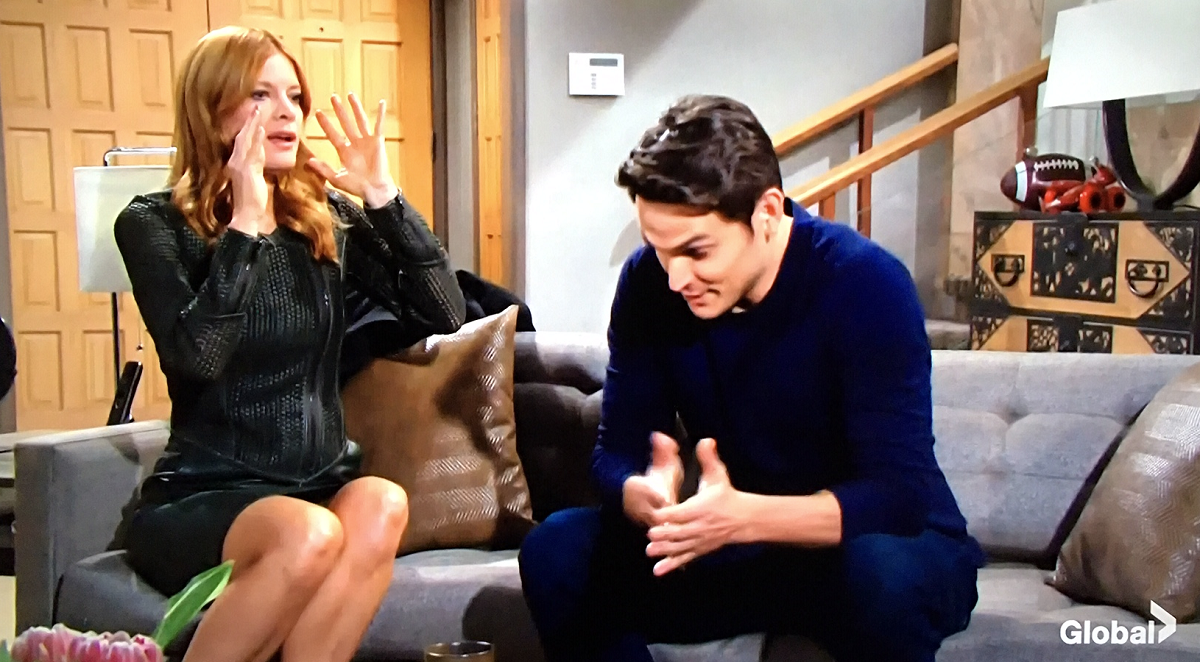 The Young and the Restless spoilers for Tuesday, October 29, tease that Billy Abbott (Jason Thompson) and Victoria Newman (Amelia Heinle) will catch up at Crimson Lights. Billy will share that he ran into Adam Newman (Mark Grossman) and that Adam knows about the hit-and-run.

Victoria won’t think that their truce is worth much. They’ll also discuss Billy’s psychological issues and she’ll wonder if he’s ready for Halloween. He’ll remark that if he can handle his real demons, then he can deal with fake ones.

Next on Y&R, Victor Newman (Eric Braeden) will show up at Adam’s penthouse for a chat. They’ll discuss how Connor Newman (Judah Mackey) is doing, and Adam will remark that he wishes they could both just leave Genoa City. Ultimately, Adam will say that he wants nothing to do with the Newmans going forward, and Victor will leave.

Young And The Restless Spoilers – Kyle Abbott Gets Some Horrifying News

Meanwhile, Theo Vanderway (Tyler Johnson) will talk with Phyllis Summers (Michelle Stafford) about Summer Newman’s (Hunter King) recent success as an influencer. But Phyllis will point out how he’s now lost many clients. Theo will take it in stride and say that he’s always juggling lot of things. Later, Lola Abbott (Sasha Calle) will briefly talk with Theo, but he’ll be disappointed when she doesn’t have time to spend with him.

Next on Y&R, at the Abbott estate, Jack Abbott (Peter Bergman) and Traci Abbott (Beth Maitland) will talk about their half-brother, Eric Vanderway (John Briddell). Jack will want to find him, but Traci will be concerned that perhaps Eric doesn’t know that he’s adopted. Jack will summon Kyle Abbott (Michael Mealor) to the house, where he’ll ask him about Theo then will tell him that he and Theo might be related.

Kyle will then learn the adoption story, and he’ll recall that Theo’s dad died when they were in high school and that Theo’s from Chicago. Jack and Traci will share a look, as Eric’s adopted parents were from Chicago. Later Jack and Traci will return from seeing Dina Mergeron (Marla Adams) but turns out they had no luck getting information from her.

Next on Y&R, Victoria and Victor will catch up at Newman Enterprises, and Victoria will be able to tell that something is upsetting Victor. She’ll think that Adam must have done something. Victor will say that he wishes that the family would give Adam another chance, and Victoria will wish that the two of them just stayed out of each other’s lives. Victor will inquire about how Billy is doing, then will warn Victoria that he won’t be forgiving if Billy screws up again.

Meanwhile, Phyllis will arrive at Adam’s penthouse wanting to get back to the business of bringing down the Newmans, but Adam will refuse and suggest that she move on. They’ll argue about Adam’s decision to walk away from the Newman fight, and finally Adam will give her a $2 million check and tell her to leave. Phyllis won’t like being bought off and she’ll rip up the check and tell Adam that he can’t get rid of her that easily.

Next on Y&R, Kyle will go to see Lola at Society and moan about how he and Theo might be cousins. Kyle will still be in shock about the whole story and quite upset at the thought of Dina cheating on his grandfather. Lola will think that she can try to find out Theo’s dad’s name, and eventually she and Kyle will approach Theo in the restaurant. They’ll order some food together, and Kyle will bring up the subject of Theo’s mom and dad.

Finally, on Tuesday’s new episode of Y&R, Billy will tell his therapist that he’ll never go back to that dark place. His therapist will say that he still needs to stay in therapy, because even the smallest thing could trigger him again. Later, Billy will update Victoria about how his therapy appointment went, and she’ll anticipate good things ahead for them.