Days of Our Lives Rumor: Gabi Targets Jordan After Finding Out About Rafe Was Poisoned? 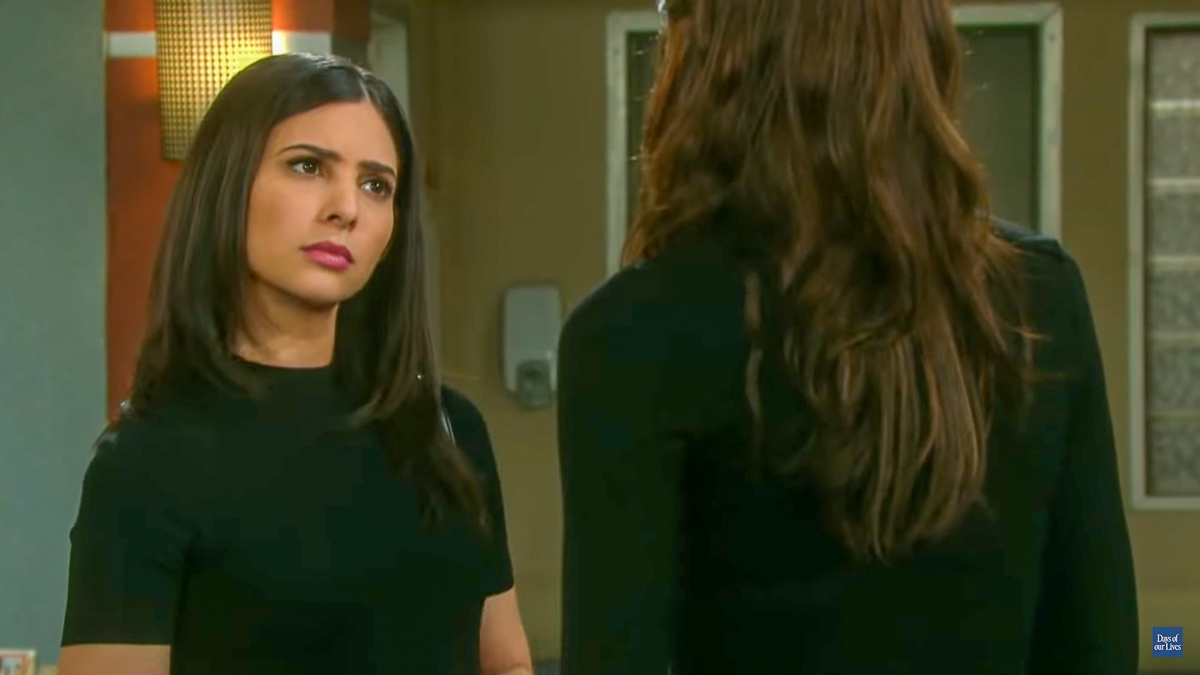 Days of Our Lives spoilers tease that Gabi Hernandez DiMera (Camila Banus) might seek even more revenge when she finds out her brother Rafe Hernandez (Galen Gering) was poisoned by Jordan Ridgeway (Chrishell Hartley)!

Gabi has just been widowed, and is already full of hatred, anger and revenge for her husband’s untimely death. What is she going to feel when she finds out that Miss Psychonutcase poisoned her older brother Rafe, who is a father figure to her, and at a birthday party that her daughter Arianna Horton (Harper and Sydnee Udell) attended, and was left alone with for a period of time? What if Jordan had given this poison cupcake to Arianna? As it was, Arianna took the identifying flags off of the cupcakes, but more than likely her uncle Rafe’s poisoning will be kept a secret from her; it’s bad enough Jordan yelled at her and made her cry! Little Ari sure doesn’t need to feel guilty and responsible for making her uncle deathly ill! Gabi would definitely be upset enough to seek even more revenge, against Jordan for poisoning Rafe and being mean to Ari! Gabi is so overwhelmed, she may not think ahead to the consequences that may happen to her as the result of her revenge!

DOOL Spoilers – Time Jump Spoilers Say At Least Two Salemites Will Be In Prison, One Will Die, And One Will Be In A One-Year Coma

According to Jason 47’s Days of Our Lives Facebook website, after the one-year time jump takes place, it will be revealed that one Salemite is dead, at least two will be in prison, and one will be in a one-year coma. A multi-character photo is on the post, with Rafe, Jordan, and Gabi all in the montage. We know that Rafe survives the poisoned cupcake, so it cannot be him who dies or is in the one-year coma. Other Days of Our Lives spoilers tease that Ben Weston (Robert Scott Wilson) will go looking for Jordan and return with baby David Ridgeway (Jaxton and Dexter Ellis) but no Jordan. Jordan will be at Bayview, where on Halloween she and Claire Brady (Olivia Rose Keegan), who she breaks out, will go on a crime spree in Salem.

After that, Ben gives into his dark side! Even though Days of Our Lives spoilers say that Gabi will be busy with trying to force Lani Price (Sal Stowers) to dump Eli Grant (Lamon Archey) at the altar, threatening to use her cell phone to stop Julie Williams’ (Susan Seaforth Hayes) pacemaker, spoilers for the week of November 4th indicate Gabi succeeds, and still will have time before November 8, which is when the time jump episode is, to seek revenge against Jordan, which could either be putting her in a coma or killing her, which may leave Gabi as one of the two or more Salemites in prison!