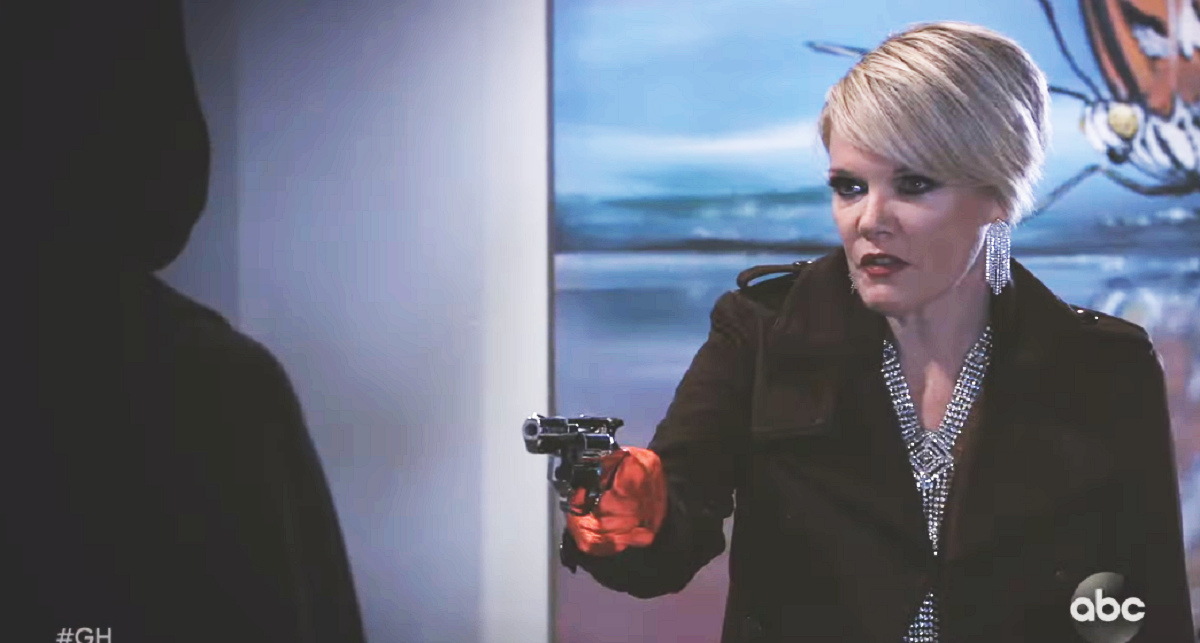 Over with Laura Webber (Genie Francis), she’ll think she should be the one to take down Valentin Cassadine (James Patrick Stuart). While Laura makes this declaration to Jasper “Jax” Jacks (Ingo Rademacher), Curtis Ashford (Donnell Turner) will assure Jordan Ashford (Briana Nicole Henry) that it’s far from a done deal. He may still be trying to ease Jordan’s mind about T.J. Ashford (Tajh Bellow) and his proposal plans.

Next, Ava Jerome (Maura West) will bail on the party and find herself back at the gallery. She’ll feel like things are turning around, but a sense of dread will creep back in. A masked mystery man will lurk until Ava confronts him with a gun. She’ll push this person to take off his mask, so many GH fans are hoping some version of Nikolas Cassadine’s underneath.

At GH, Neil Byrne (Joe Flanigan) will tell Alexis Davis (Nancy Lee Grahn) he’s got a confession to make. Whatever this admission is should strengthen their bond. Neil should find a way to make Alexis feel better briefly, but it’s clear that she’s going to get much worse. Kendra Lennon (Michelle Argyris) will make sure of it!

Other General Hospital spoilers say the high school dance will kick off on The Haunted Star. Dustin Phillips (Mark Lawson) will be there to chaperone, and GH fans will recall that Lulu Spencer (Emme Rylan) agreed to be his date. They’ll expect the evening to go smoothly, but when has anything ever gone smoothly at an event in Port Charles? Some teen drama is definitely brewing.

It looks like Trina Robinson (Sydney Mikayla) will open up to Dev “Corbin” aka Dev Cerci (Ashton Arbab) about her feelings for him. She’ll insist all she sees is Dev, but his eyes have been on Josslyn Jacks (Eden McCoy) lately. As for Joss, trouble will find her thanks to Cameron Webber (William Lipton). They’ll have a bit of an adventure, but it’s bound to end in disaster since Cam swiped some booze.

General Hospital spoilers say consequences are coming up for Josslyn and Cameron, so don’t miss what’s in store. Elsewhere, Hamilton Finn (Michael Easton) will talk to Hayden Barnes (Rebecca Budig) about their daughter. They’ll revisit their discussion of what part Finn will play in Violet Finn’s (Jophielle Love) life. Hayden will surely let Finn be as involved as he wants now that he knows the truth.

At Pentonville, Sam McCall (Kelly Monaco) will meet her new cellmate, who just might be lethal! General Hospital buzz points to Cassandra Pierce (Jessica Tuck) being stuck in a cell with Sam, things could get interesting. We’ll give you updates as other GH news and rumors emerge.

Stay tuned to the ABC soap and don’t forget to check back often for the latest General Hospital spoilers, updates and news.