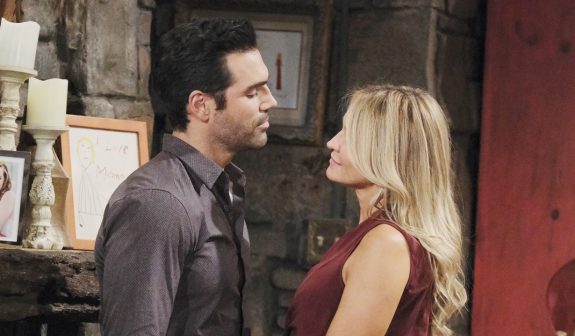 The Young and the Restless spoilers for Thursday, October 31, tease that Abby Newman (Melissa Ordway) will decide to stay the night in one of the sleeping rooms at The Grand Phoenix. And across the lobby, Rey Rosales (Jordi Vilasuso) and Sharon Newman (Sharon Case) will talk and Rey will give Sharon some jewelry. They’ll wind up in a room upstairs making love.

Meanwhile, in her hotel room, Phyllis Summers (Michelle Stafford) will still be irked about Adam Newman (Mark Grossman) tying to buy her off. She’ll end up falling asleep and having a Halloween dream all about what things would be like if she ran Newman Enterprises. In her dream, she’ll arrive to her office, complete with a portrait of herself on the wall. Sharon will be her doting secretary.

Phyllis will dream that the Abbotts are in her office. She’ll fire Kyle Abbott (Michael Mealor) for breaking Summer Newman’s (Hunter King) heart, and then dismiss Jack Abbott (Peter Bergman) after he makes a pitch to her. Then the Newmans will appear in her office. She’ll lecture them, but then she’ll realize that none of them are listening to her, as she’s become invisible.

Young And The Restless Spoilers: Mishael Morgan Opens Up About Her Return To Y&R

The Newmans will then discuss Phyllis’ tragic downfall, and how she’s now destitute and living on the streets. Nick Newman (Joshua Morrow) will say that they could help her out with funds from The Newman Foundation and they’ll all laugh hysterically. Phyllis will then wake up from the dream and head back downstairs to the lobby to make sure she’s “visible.”

Next on Y&R, Rey will do some dreaming of his own. In their room at The Grand Phoenix, he’ll dream that he and Sharon are on a mission to steal jewelry from the Newman Ranch. While there, Sharon will try to seduce him, then she’ll leave after they hear a noise, saying that she’ll meet him at the designated spot. Rey will then appear in Lola Abbott’s (Sasha Calle) apartment, and Lola will tell Rey that Sharon didn’t show up at the meeting spot.

Adam will then arrive and will tell Rey that Sharon just used him and that he and Sharon are actually together. Suddenly there will be sirens and Rey will realize that Adam tipped off the police. Rey will then wake up from his dream with a start and eventually realize that he was just dreaming.

Next on Y&R, Lola and Kyle will arrive home from Mariah Copeland’s (Camryn Grimes) Halloween party. They’ll watch TV and eventually Kyle will fall asleep. He’ll dream that Theo Vanderway (Tyler Johnson) is throwing a big tequila party at the Abbot estate. Abby will show up and go on about the “fab” party and about how he’s with the food truck girl. Later, Summer’s name will come up and Lola will get upset and yell at Kyle to get over her.

Jack will then arrive upset about the whole thing and tell Theo that he’s out, but Theo will say that he’s had Jack declared incompetent and that he’s going to live with Dina Mergeron (Marla Adams). Kyle will yell that the party will go on forever, and Kyle will wake up from his dream. He’ll tell Lola about his dream and they’ll finally go to bed.

Young And The Restless Spoilers: Nick Newman Dreams Of His Brother’s Death

Next on Y&R, Nick will fall asleep alone and have a dream that Nikki Newman (Melody Thomas Scott) and his sisters are standing around a casket crying. Nikki will tell him that “Victor’s dead” and that he knows why. Nick will then drop a knife and insist that he didn’t kill him. He’ll then see Phyllis and wonder why she’s there mourning his father, then he’ll open the casket and see that it’s Adam who has died.

Victor Newman (Eric Braeden) will then appear and Nick will realize it was “Victor Jr.” who died. Chelsea Lawson (Melissa Claire Egan) will appear and say that Connor Neman (Judah Mackey) will use the name Victor from now on. That will make Victor happy, and he’ll say that he’ll now be Connor’s father. Nick will be horrified.

Rey will then arrive to arrest Nick for the murder of Adam, while Sharon says she saw the whole thing. Nick will then wake up from his dream with Chelsea there with him. Chelsea will apologize for falling asleep at Adam’s, but Nick will just be glad that she’s there now. She’ll say that there’s no place that she would rather be.

Y&R Spoilers: Abby Newman Dreams Of Her Life As A Sitcom

Finally, on Thursday’s new episode of Y&R, Abby will be asleep in her room, where she’ll dream that her life is one big sitcom that takes place at Society. Kyle, Lola, Mariah, and Theo will all be there taking jabs at her, with a laugh track following each joke. Abby will try to tell them that she’s the boss, but they’ll mock her and tell her she’s just the hostess. She’ll then awaken from her dream and realize she was just dreaming.