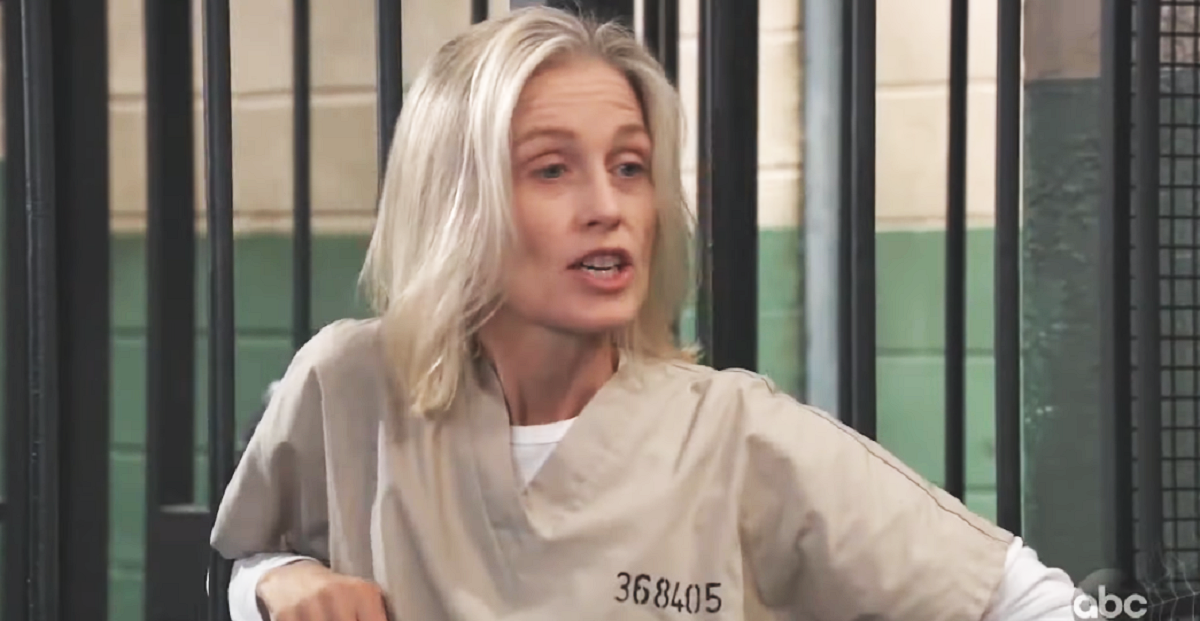 General Hospital (GH) recap for Thursday, October 31, 2019, reveals a dark-haired guy is in the shower. He gets out, puts on the ring with the Cassadine crest and begins to get dressed. The man puts on his mask and goes to the Metrocourt. Laura walks into him but he doesn’t speak.

General Hospital’s Alexis Davis (Nancy Lee Grahn) is trying to get Molly Lansing Davis (Haley Pullos) and T.J. Ashford (Tajh Bellows) to leave her at the hospital. Neil Byrne (Joe Flanigan) shows up and promises to not let Alexis leave. Molly and T.J. meet up with Kendra Lennon (Michelle Argyris) at the Metrocourt. T.J. asks about Alexis supplement.

Molly tells Kendra that Alexis is sick and in the hospital. Neil was afraid that Alexis faked the illness to get rid of him. Alexis’ hands start to hurt worse and Neil is worried. Molly is sure that Alexis will be fine. Finn comes back to Alexis’ room. Finn tells Alexis this isn’t something just going around.

General Hospital’s Valentin Cassadine (James Patrick Stuart) tells Nina Reeves (Cynthia Watros) there is some reason that Laura Webber (Genie Francis) wants Helena Cassadine’s portrait. Ava overhears Nina and Valentin talking and decides that portrait if more valuable than she thought. Valentin asks Ava about the portrait and wants a price. Michael Corinthos (Chad Duell) tells Sasha Gilmore (Sofia Mattsson) about his run-in with Ava Jerome (Maura West). Ava calls Trina Robinson (Sydney McKayla) about the portrait before getting into the elevator. The mystery man follows Ava but doesn’t get in with her.

Nina argues with Sasha and Willow Tait (Katelyn McMullen) comes to her defense. Ava makes plans to have the portrait appraised. Michael wants Valentin to get Nina to back off of Sasha but she refuses. Nina and Willow argue after Harrison Chase (Josh Swickard) arrives. Meanwhile, Ava’s mystery man follows her to the gallery. Michael tells Nina she doesn’t get to attack Sasha. Michael questions why Nina believes Sasha came up with this alone. Laura tells Valentin he is about to lose the Cassadine fortune as Ava unmasks Nikolas Cassadine (Actor Unknown).

General Hospital’s Dev Corbin (Ashton Arbab), Trina Robinson (Sydney McKayla), Josslyn Jacks (Eden McCoy), and Cameron Webber (William Lipton) arrive at the dance. Trina and Dev go to check out the party. Cameron shows Jocelyn the bottle of alcohol. Cameron that the alcohol would help him and Jocelyn get through the night better. Cameron takes a drink of liquor and chokes. Jocelyn wants to go outside to take a drink. Trina makes a pass at Dev.

Cameron and Jocelyn go out on the deck and talk. Trina gets mad at Dev for not wanting to be with her. Jocelyn tells Cameron she would have never made it this far without him. Jocelyn and Cameron go back inside drunk. Trina tells Jocelyn they need to get out of there. Jocelyn is about to be sick. Cameron knocks over the candy. Dev asks Cameron if he’s drunk. Trina tries to get Jocelyn off the boat but they get caught.

General Hospital’s Hayden Barnes (Rebecca Budig) tells Hamilton Finn (Michael Easton) she is moving in with Liz Webber (Rebecca Herbst). Finn wants to know where he stands in Violet Finn’s (Jophielle Love). Finn wants to be a father to his child. Hayden is open to whatever Finn wants in a relationship. Jax arrives and Hayden updates him on Violet. Hayden and Jax talk about the portrait. Jax realizes Dev took the portrait to Ava.

General Hospital’s Curtis Ashford (Donnell Turner) asks Jordan Ashford (Briana Nicole Henry) why she doesn’t want Molly and T.J. to get married. Curtis realizes that Jordan doesn’t want T.J. to make the same mistakes she has. Jordan says T.J. and Molly will have to face the race card if they have kids. Curtis tells Jordan this is up to him and Molly.

Curtis says Stella Henry (Vernee Watson) will give her opinion as soon as she finds out about this. T.J. comes back and gives Jordan and Curtis an update on Alexis. Jordan tells T.J. she could not be happier for him. Share your thoughts in the comments below!  And check back right here for all your General Hosptial news, information and spoilers!