The Bold and the Beautiful Spoilers: Friday, November 1 – Liam & Steffy Enjoy Their Bond & Time With The Girls – Hope Gets Put On The Spot 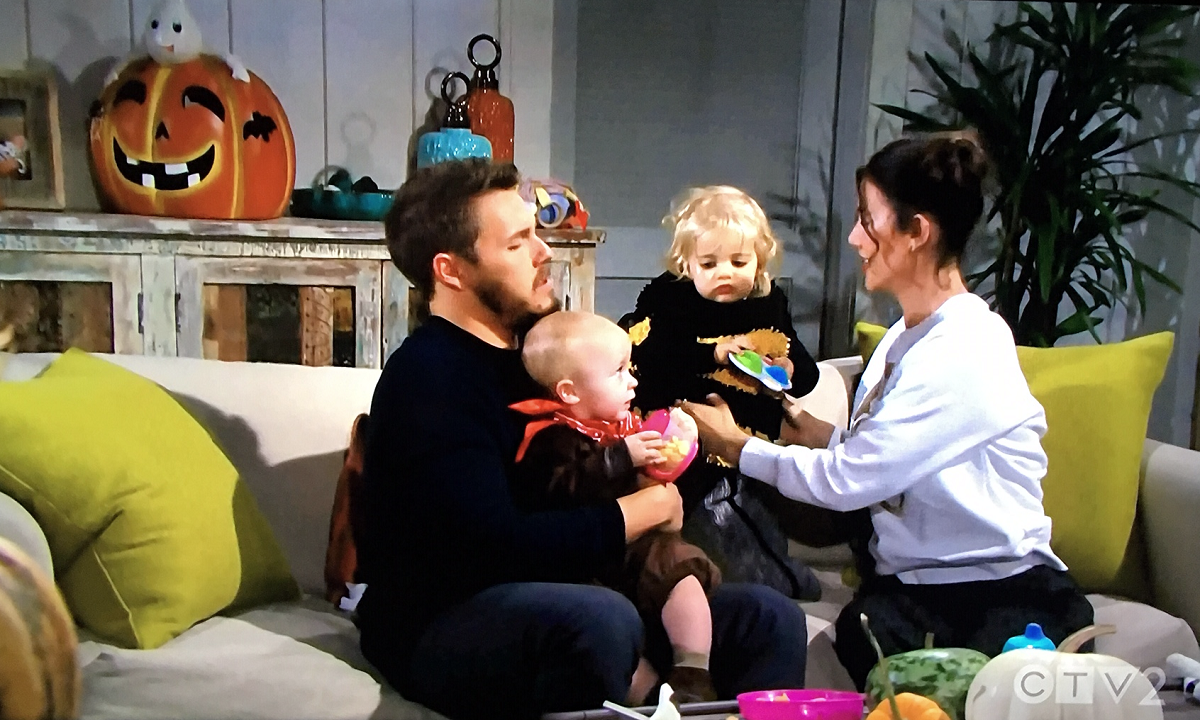 The Bold and the Beautiful spoilers for Friday, November 1, tease that Liam Spencer (Scott Clifton) and Steffy Forrester (Jacqueline MacInnes Wood) will take comfort in their daughters. As B&B viewers know, Steffy invited Liam and Beth Spencer (River Davidson and Madeline Valdez) over to her house for Halloween evening after she learned that Hope Logan (Annika Noelle) had gone out for the night to attend the Forrester Halloween soiree.

So far, Liam, Steffy, Beth, and Kelly Spencer (Zoe Pennington) have been enjoying their time together. The girls have been playing together and wearing cute costumes while Steffy and Liam have caught up, and B&B spoilers indicate that this will end up being quite meaningful for them. They’ll take great comfort in their kids, and it looks like they’ll each voice just how thankful they are to be spending this time together.

Steffy will probably be especially grateful for this time with Beth, since she’s been missing her so much. Steffy will likely take the opportunity to thank Liam for the evening, and for allowing their daughters to bond as sisters on this special occasion. B&B viewers will remember that what Steffy wanted most of all for Kelly was to have a close sibling bond with a sister, much like she had with her own sister growing up.

The Bold and the Beautiful spoilers also indicate that Steffy and Liam will talk about their own special bond. They’ve been through a lot together, and they’ll probably revel in their closeness and how far they’ve come – both as friends and as parents to two special little girls. Even though Beth no longer belongs to Steffy, she’ll still be happy that Beth is going to be a part of her life going forward.

Meanwhile, on Friday’s new episode of B&B, Hope will have a big dilemma. As B&B viewers know, she’s on a mission to manipulate Thomas so that he’ll allow her to adopt Douglas Forrester (Henry Joseph Samiri). She wants to co-parent Douglas with Thomas for a while, so that she can later petition the court for sole custody of him.

It’s a devious plan, and for it to work, she needs to convince Thomas that she’s forgiven him and would make a reasonable adoptive parent for Douglas. She needs for Thomas to believe that there’s the possibility of a future for the three of them to be together down the road. And so far, her plan seems to be working nicely. She even flirted with Thomas a little and told him that she wanted to forget the past and focus on the future.

Bold And The Beautiful Spoilers – Douglas Forrester’s Got Tough Questions

But on Friday’s B&B episode, Hope will find herself in a bind. She’ll be with Thomas and Douglas when the two start questioning her about their future together. It looks like she might be put in a tight spot where she’ll have to lie about the possibility of them being together someday. Of course, Hope isn’t planning on any kind of future with Thomas, but she might be forced to say that she is.

Douglas can be pretty straightforward, so he may throw some tough questions in Hope’s direction. It will be interesting to see how Hope handles it all and how Thomas reacts to the situation. Will he buy Hope’s about-face when it comes to him, or will he start to suspect that she’s playing him?