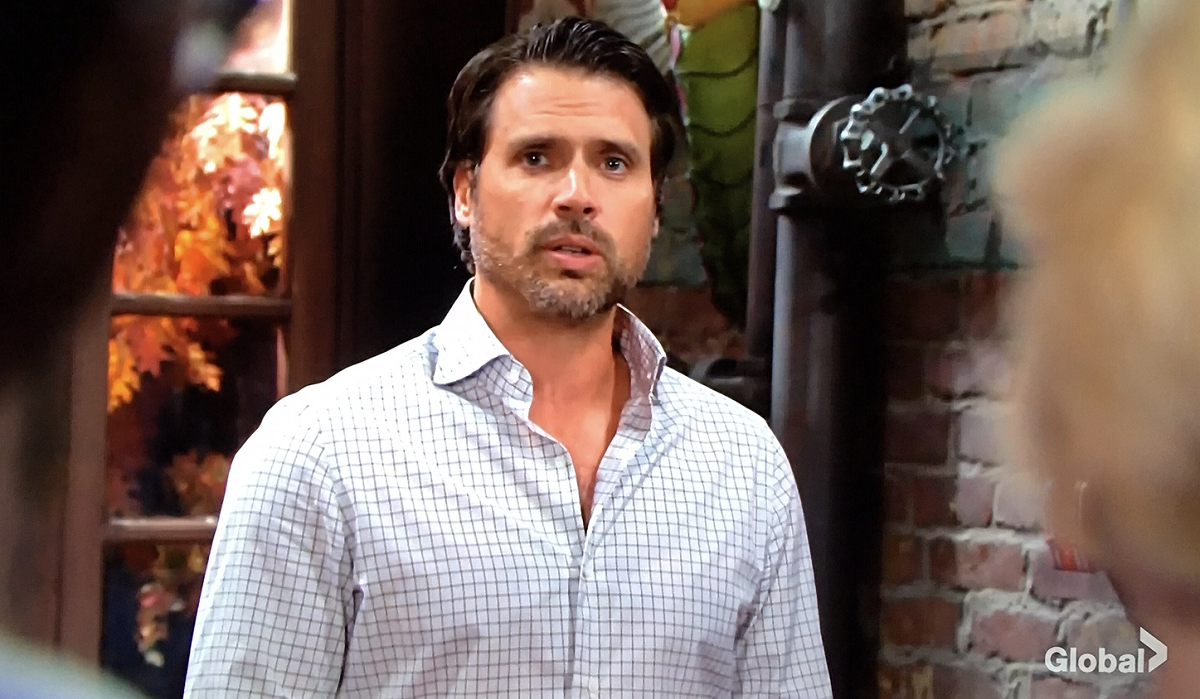 The Young and the Restless spoilers for Friday, November 1, tease that Nick Newman (Joshua Morrow) will be with Chelsea Lawson (Melissa Claire Egan) getting ready for his upcoming press conference.

She’ll think that he looks great but needs a more down-to-earth look than his Italian suit projects. Chelsea will still worry about their pasts and how it will affect his chances at getting the city council seat, but Nick will reassure her. They’ll agree to meet later before the press conference.

Nikki Newman (Melody Thomas Scott) will then arrive, happy that Nick decided to run. Chelsea will leave and Nick will ask Nikki to manage his campaign, but Nikki will refuse because of all the Newman baggage and her connection to the family company. Nick will insist, so Nikki will say that he’ll help but in an unofficial capacity. Nick will ask her to come to the press conference.

Young And The Restless Spoilers – Amanda Sinclair Gives Her Instructions

Next on Y&R, at The Grand Phoenix, Amanda Sinclair (Mishael Morgan) will be on a phone call and remark that “he” is still in the same location. Nate Hastings (Sean Dominic) will arrive and they’ll discuss his medical board case. She’ll ask to hear the story of what happened again, then instruct him to never tell that version of events again to anyone but her. She’ll provoke him to see how he reacts and what kind of witness he is.

The Young and the Restless Spoilers: Kyle Not Ready To Expand Family – Reveal Stokes Theo

Nate will explain to Amanda that he wasn’t influenced by Abby Newman (Melissa Ordway) to take part Victor Newman’s (Eric Braeden) death ruse; rather, he was convinced there was a threat to Victor. Amanda will say that what they’ll sell is that he put his career on the line for a man’s life. They’ll decide that the next step is to talk with Victor, although Nate will be afraid of what he might say to him. Amanda will say that she’ll do all the talking.

Next on Y&R, Simon Black (Jeffrey Vincent Parise) will introduce himself to Chelsea. He’ll tell her that she has something that belongs to him and he wants it back. Chelsea won’t know what he’s talking about, but then he’ll explain that he and Calvin Boudreau (John Burke) were colleagues but when he went to collect his final obligation from the storeroom, he found it empty.

Chelsea will try to play innocent, but Simon will say that her circumstances have certainly improved since Calvin’s death, and he’ll say that life can be short. He’ll further note that he isn’t buying her act and that he’ll be in touch. After he leaves, Kevin Fisher (Greg Rikaart) will arrive and Chelsea will say that she needs her money back. Kevin will tell her that the money’s gone and the Feds seized it. Chelsea will be horrified.

Next on Y&R, at Society, Victor and Kevin will bicker about the past, and about Chloe Mitchell (Elizabeth Hendrickson) and Adam Newman (Mark Grossman) returning to Genoa City. Kevin will get a call and leave. Amanda and Nate will then arrive and talk with Victor. Victor will say that he heard about the medical board’s investigation and that he wants to help. Amanda will ask him to give a statement.

Nate will then suddenly interject that he regrets being involved in the scene. He’ll go on about how he could lose everything while Victor goes unscathed, and Amanda will finally cut him off. Victor will say that he will take the blame for it all. Once Victor’s gone, Amanda will blast Nate for going off on Victor. Outside, Victor will call someone and ask them to do some research on Amanda.

Young And The Restless Spoilers – Nick Newman Gets Ready For Announcement

Finally, on Friday’s new episode of Y&R, Nick and Nikki will get ready for his press conference. Nick will be nervous, and he’ll wonder where Chelsea is and won’t want to start without her. Nikki will wonder if Chelsea is really OK with him running for public office.

Young And The Restless Spoilers: Billy Assumes A New Identity! Will Anyone Catch Him? https://t.co/T22c3AvrR3 pic.twitter.com/5Lin2jYR96

Ultimately, Nick will start the press conference and formally announce his candidacy while Nikki looks on but no Chelsea. Afterwards, Nick will be upset that Chelsea didn’t show and he’ll think that something must be wrong.