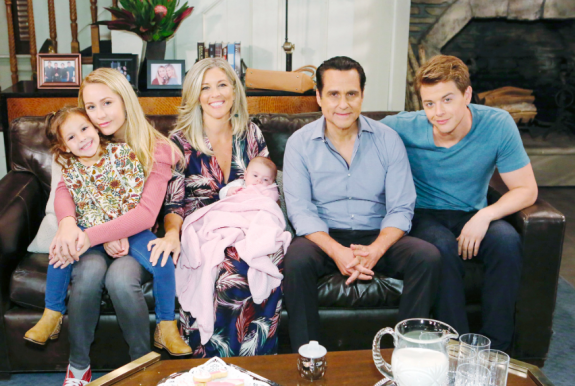 General Hospital (GH) spoilers reveal that fans are still gushing over the adorable scenes in the Corinthos home. Donna Corithos was finally released from GH, so her family was able to give her a proper welcome. That included meeting Avery Corinthos (Ava and Grace Scarola) and plenty of other warm moments with the fam. Happiness looks good on the Corinthos clan!

However, there was one moment fans didn’t get to see. Thankfully, Eden McCoy (Josslyn Jacks) captured it on set and decided to share it on Twitter. It was a cute conversation between McCoy’s TV big brother and little sister. McCoy and her costars may not actually be related, but they might as well be in her book. She loves her General Hospital family, so she just wanted to serve up a slice of it.

“One of the sweetest behind-the-scenes moments i’ve ever seen, between two of the sweetest humans,” McCoy tweeted. She added that she’s “lucky to work with them” and included an emoji heart to show her affection for the duo. Chad Duell (Michael Corinthos) and one of the Scarola twins can be seen chatting in the clip. Duell earns some laughs from his TV sis, which indeed makes for a sweet moment. He takes her hand as they start to walk away, and that just makes it even cuter.

McCoy tagged Duell and the Scarola twins’ accounts, so she got some fun responses. Since Duell is always a bit of a class clown on Twitter, he had a humorous reply. “Paparazzi McCoy,” Duell tweeted. The person running Ava and Grace’s account responded for the girls: “Thank you @RealEdenMccoy for sharing…We are for sure the lucky ones to work with you all!!”

one of the sweetest behind-the-scenes moments i’ve ever seen, between two of the sweetest humans. from today’s air show. i’m lucky to work with them❤️ @duelly87 @Scarolatwins #GH #GHFamily pic.twitter.com/pttvSsMzmb

Many GH fans piped up about how great Duell is with kids. There were comments about what a fantastic dad Duell may be someday. Of course, this clip also makes us even more eager to see Michael get his baby back. Everyone’s ready for Michael to learn the truth about “Wiley Cooper-Jones” aka Jonah Corinthos, so let’s hope that bomb drops soon.