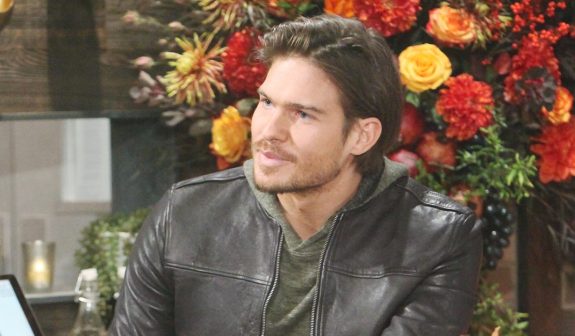 The Young and the Restless spoilers for Monday, November 4, tease that Chelsea Lawson (Melissa Claire Egan) will leave Nick Newman (Joshua Morrow) a voicemail apologizing for missing his press conference. Abby Newman (Melissa Ordway) will chat with Simon Black (Jeffrey Vincent Parise), then tell Chelsea that a handsome guest was looking for her. Chelsea will suddenly ask Abby if she’d like to buy out her share of the hotel and Abby will be shocked.

Nick will arrive and question Chelsea about missing his press conference. She’ll make excuses about dealing with a lot at the hotel, then she’ll suggest that she stay in the background of his campaign. Nick will disagree and say that he can’t do this without her.

Meanwhile, Abby will tell Rey Rosales (Jordi Vilasuso) that Adrian Rosales (Jay Montalvo) left without paying his bill. Rey will offer to pay for the bill, but Abby will refuse. Later, Nick and Chelsea will speak with a reporter about his campaign, and Chelsea will get distracted by Simon, who is sitting nearby watching.

Once Nick and the reporter step away, Simon will give Chelsea 24 hours to get him his money, but Chelsea will need more time. Simon will then give her 48 hours. Chelsea will then call Kevin Fisher (Greg Rikaart) and tell him that she needs his help.

Next on Y&R, Jack Abbott (Peter Bergman) will announce to Kyle Abbott (Michael Mealor) and Lola Abbott (Sasha Calle) that he’s got the results of Theo Vanderway’s (Tyler Johnson) DNA test, and that Theo is Dina’s grandson. Kyle will be upset and warn his dad that he’ll regret pursuing this. After Jack leaves, Lola will remark that Kyle was harsh with his dad.

Kyle will insist that the family is going to be turned upside-down by Theo. Lola will think that he should keep an open mind, and this will result in a major argument between Lola and Kyle over Theo. They’ll yell at each other before Lola retreats to the bedroom. Later, they’ll talk and agree that this issue shouldn’t come between them. Lola will tell him that he owes someone else an apology, too.

Next on Y&R, at Crimson Lights, Mariah Copeland (Camryn Grimes) will talk with Sharon Newman (Sharon Case), who will spill details about her date with Rey. Mariah will worry that Adam Newman (Mark Grossman) might mess things up between them again. Sharon will say that things are different now. Mariah will invite Sharon to a get-together later for her anniversary with Tessa Porter (Cait Fairbanks).

Young And The Restless Spoilers: Theo Vanderway Meets His Grandmother

Next on Y&R, at the Abbott estate, Theo will talk with Jack about being related to the Abbotts. Jack will warn that Kyle needs time to process everything. Theo will wonder where they all go from here, and Jack will say that they’ll work through it together. Theo will indicate that he’d like to meet Dina Mergeron (Marla Adams), since his dad never had the chance.

The Young and the Restless Rumor: Chelsea Goes Back To Her Old Ways – Simon Black Held Responsible? https://t.co/PmTHz0dC0V pic.twitter.com/k2QqGdMJl5

Later, Dina will be there at the estate along with Theo and Jack. Jack will introduce Theo and Dina will start to cry as she recognizes his last name. She’ll say, “Eric, is that you?” Theo will play along and agree that he’s Eric Vanderway (John Briddell). She’ll ask if his parents love him, and he’ll say that they do, very much. She’ll get tired, and Theo will listen as Jack has to remind Dina that he’s her son.

Later, Jack will come home from taking Dina back to her facility to find Kyle there. Kyle will apologize for his behavior earlier, but then he’ll remark that it won’t be long before Theo starts asking for things. Jack will share that Theo met with Dina. Kyle still won’t like any of it and won’t trust Theo. Jack will say that Kyle will have to find a way to accept all of this.

Next on Y&R, at Society, Rey will visit with Lola in the kitchen and tell her about Adrian not paying his bill at The Grand Phoenix. She’ll briefly mention Kyle’s family drama before Rey leaves. Theo will then arrive and talk with Lola. He’ll tell her about his meeting with Dina and how it went. Theo will remark that he thought he knew who he was, but now he’s not so sure.

Finally, on Monday’s new episode of Y&R, Rey will appear at Crimson Lights and ask Sharon out again. Sharon will invite him to Mariah’s party for Tessa. Meanwhile, on the patio, Mariah will tell Tessa over the phone that she’ll see her later tonight.