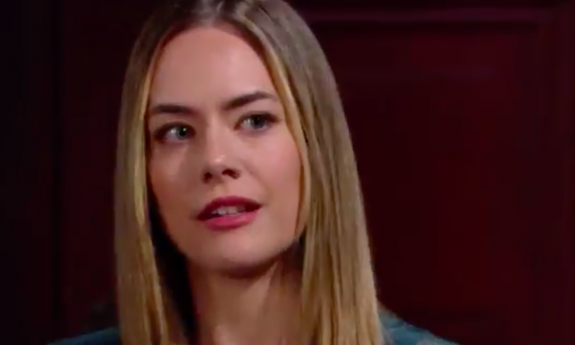 At first blush, the headline assertion seems way off regarding the potential of ‘Thope’ on ‘The Bold and the Beautiful’. But Hope Logan’s (Annika Noelle) efforts could result in Thomas Forrester (Matthew Atkinson) being her best choice.

Thomas loves Hope. Yes, some, like Hope herself, may call his feelings obsession. But maybe he does deserve the second chance that Hope intends for him to believe she’s offering?

Bold and the Beautiful Spoilers: Hope’s Dangerous Game – Makes Thomas Believe They Have a Future Together

In a creative attempt to eventually obtain full custody of Douglas Forrester (Henry Joseph Samiri), Hope is pretending to bury the hatchet with Thomas as part of a fluid plan she’s developing. Brooke Logan Forrester (Katherine Kelly Lang) and the audience agree that Hope’s quest is risky, but everyone knows that Noelle’s character is determined to realize her goal.

Thomas and Hope agree that Douglas needs a mother figure. That’s been true for months.

However, Thomas’ manner of securing Hope as his wife included using his son as an emotional tool. Hope came to love Douglas, as he came to care for her. On that point Thomas’ vision was right, although his methods were wrong.

‘Thope’ ended due to the Beth Spencer (Madeline Valdez and River Davidson) reveal. While Thomas explained himself, he also honestly regrets what he did to Hope and continues to tell her so.

Hope feels Thomas’ ongoing admiration and is now attempting to play into that in order to enable an adoption. Hope would become Douglas’ legal parent with Thomas’ retaining his parental rights if all goes well.

Hope immediately reconciled with Liam Spencer (Scott Clifton) after Beth was recognized as alive. ‘Lope’ hasn’t been fully solid, as Hope’s insecurities where Steffy Forrester (Jacqueline MacInnes Wood) is concerned recently came out. The issue was resolved, but surely could evidence itself again at any time.

The bond Liam has with Steffy is real. But he’s stated that he only has romantic feelings for Hope, who appeared to believe him.

Now, in not telling Liam about her adoption pursuit, Hope risks distancing herself from the claimed love of her life. Liam surely won’t be pleased whenever he learns what Hope is doing.

Thomas will need to demonstrate, or prove stability before Hope even considers giving him a real second chance. But he could ingratiate himself in a natural way by simply being a good father.

Hope’s priority is Douglas, since Beth is okay. So, it’s plausible if B&B has Hope develop a friendship with Thomas over time. From that point and in anticipation of ‘Lope’s’ potential for relationship trouble, Hope’s feelings for Thomas could be developed as well.