Days of Our Lives Spoilers For Week of November 4 – 8: Three Weddings And A Funeral? – Jennifer Raced To Hospital – Sarah Gets A Warning 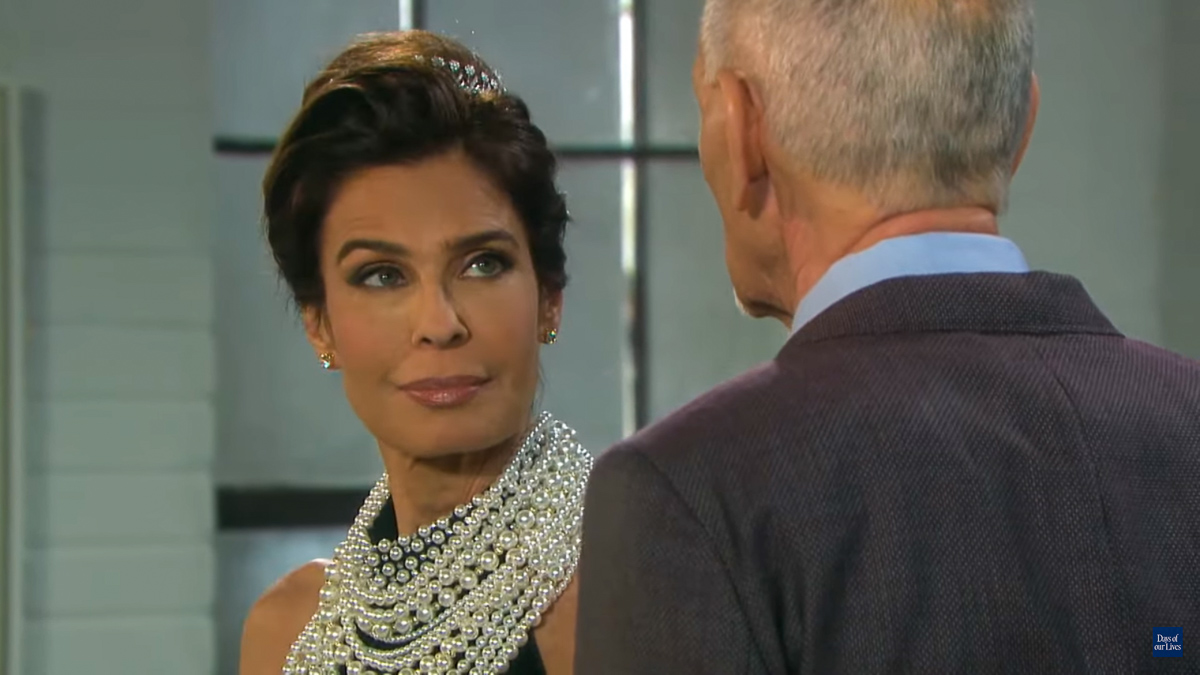 The Days Of Our Lives Weekly Preview: Three Weddings And A Funeral?

The Days of Our Lives weekly preview for the week of November 4 teases that there will be three weddings and a funeral, although the funeral is a question mark! It’s Lani Price (Sal Stowers) and Eli Grant’s (Lamon Archey) wedding day, and as the wedding guests are gathering in the Horton Town Square, the newly engaged Jack Deveraux (Matthew Ashford) and Jennifer Horton (Melissa Reeves) tell their son and his girlfriend, JJ Deveraux (Casey Moss) and Haley Chen (Thia Megia) that they are getting married! In the Kiriakis mansion, Justin Kiriakis (Wally Kurth) kisses Adrienne Kiriakis (Judi Evans). Jack and Jenn and Justin and Adrienne plan a double wedding for both couples, also in the Horton town square. At Lani and Eli’s wedding, however, there is trouble as Lani dumps Eli at the altar as Marlena Evans (Deidre Hall) gets ready to officiate; Lani storms off into the audience of wedding guests and heads straight for Gabi Hernandez DiMera (Camila Banus) and then she proceeds to knock her down to the ground and beat her up as the stunned wedding guests stand up in their seats and watch, and Eli shouts, “LANI, WHAT ARE YOU DOING? LANI, WHAT IS THE MATTER WITH YOU?!” The possibility of having to arrest his fiancée at his wedding for assault and battery wasn’t in his wedding plans! Meanwhile, as Jack, JJ and Haley are standing in the town square, suddenly Jennifer comes hurtling down from a balcony, screaming as she falls, and hits the ground hard as they look on in shock and horror!

Monday, Marlena will warn Sarah Horton (Linsey Godfrey) about dating Xander Kiriakis (Paul Telfer) after she likely spots them together at Lani and Eli’s would-be wedding. Justin will head to the courthouse and get his and Adrienne’s marriage license. Also on Monday, Abe Carver (James Reynolds) will try to understand his daughter Lani’s actions.

Days of Our Lives Spoilers – A Double Wedding Takes Place In The Town Square – Dr. Wilhelm Rolf Shares A Piece Of Information With Princess Gina

Tuesday, a double wedding will take place in the Horton Town Square, as Jack and Jennifer and Justin and Adrienne plan to get married in a double ceremony. Elsewhere, Dr. Wilhelm Rolf (William Utay) shares a piece of information with Princess Gina (Kristian Alfonso). Also on Tuesday, Eve Donovan (Kassie DePaiva) tries to stir up trouble for Jack and Jennifer, and Jennifer makes a shocking discovery; and Princess Gina will take drastic measures to protect Rolf’s secrets.

On Wednesday, Dr. Kayla Johnson (Mary Beth Evans) and Haley work to save Jennifer’s life in Salem University Hospital, after her terrible tumble in Horton Town Square. Promo stills show Jennifer with her neck in a cast, so it’s a good possibility she has a broken neck as well as being in a coma. Elsewhere, Princess Gina, who pushed her off the balcony, has a run-in with Rafe Hernandez (Galen Gering). Will Rafe figure out that Princess Gina is his ex-wife Hope Brady (Kristian Alfonso) under some type of mind control or will he think she just went off the rails? Also on Wednesday, Julie Williams (Susan Seaforth Hayes) is stunned when Eli tells her what happened at the would-be wedding, and Princess Gina returns Dr. Rolf’s flash drive to him.

Thursday, Nicole Walker (Arianne Zucker) will struggle with whether or not she should tell Eric Brady (Greg Vaughan) that Sarah Horton (Linsey Godfrey) is pregnant with his baby; meanwhile, Ben Weston (Robert Scott Wilson) has a nightmare that he has murdered his own sister, Jordan Ridgeway (Chrishell Hartley). Also on Thursday, Kristen DiMera (Stacy Haiduk) has a pregnancy scare; Brady Black (Eric Martsolf) and Xander have a run-in; and Jack and JJ search for answers about Jennifer’s fall.

Friday, Ben makes a horrific discovery! It’s a dead body; in the gatehouse where he and Ciara Brady (Victoria Konefal) live! Might it be Jordan? Meanwhile, Kristen DiMera (Stacy Haiduk) drops a bomb on Eric! Will she be the one to tell him Sarah’s pregnant with his child? Also on Friday, John Black (Drake Hogestyn) and Marlena mark their one-year wedding anniversary, Princess Gina tries to ensure that Jennifer never wakes up, and John brings an hourglass for Jack to the hospital, that helped him cope with when Marlena was in a coma. Jack will turn the hourglass over and……..!