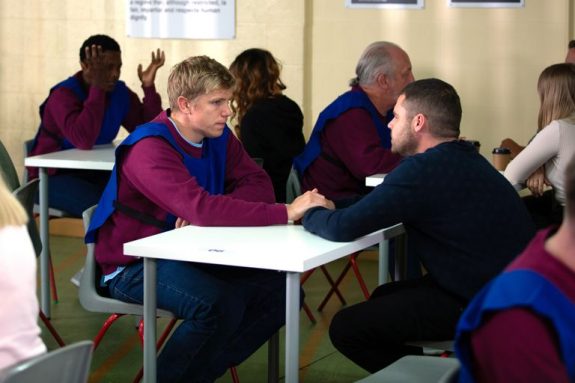 “Emmerdale” aired Robert Sugden’s (Ryan Hawley) final episode on its November 1 episode. He was transferred to an Isle of Wight prison after being sentenced to a life imprisonment for attacking Lee, who eventually died in the hospital.

He says his farewell to Aaron Dingle (Danny Miller). But Victoria Barton (Isabel Hodgins) won’t be able to say bid goodbye as he will put a moratorium on receiving visitors. The scenes will be aired next week.

Emmerdale Spoilers For The Week of November 4

Liv Flaherty (Isobel Steele) and Victoria will continue to worry about Robert after receiving a life sentence. Aaron and Wendy Posner (Susan Cookson) will argue at The Mill and the latter will end up apologizing after Victoria intervenes. Victoria comforts Aaron and tries to get through him. Later, Chas Dingle (Lucy Pargeter) informs Victoria that Robert doesn’t want to see anyone in prison especially her and Aaron.

Now that Robert’s in prison, many fans are wondering what could be up next for Aaron? How will he cope after his dramatic exit?

“When a big character like [Robert] exits, there is huge story potential in terms of kicking off the next chapter for Aaron,” she teased.

“Robert leaving is going to hit him hard. He is the love of Aaron’s life whom he adored, and has kept Aaron anchored and on the straight and narrow,” she added.

“So when the rug is pulled from underneath his feet, it really affects Aaron and it makes him behave in ways that he wouldn’t normally,” she continued.

Emmerdale Spoilers: A Wedding On The Horizon?

Brooks also hinted that Charity Dingle and Vanessa Woodfield (Michelle Hardwick) may eventually tie the knot, but not anytime soon.

“It is something that will eventually happen in time, but it’s not on the cards immediately,” Brooks said.

She added that couples usually stay together for two to three years before they say their I do’s. However, she’s not saying that viewers have to wait that long before they see Charity and Vanessa say their wedding vows.

“Currently we have a nice dynamic with the two of them living together with Moses, Johnny, Noah, and Sarah, and it’s about the problems that people face day to day. They have two teenagers in the house that aren’t going to be easy, and it’s about how they test Charity and Vanessa’s relationship.”