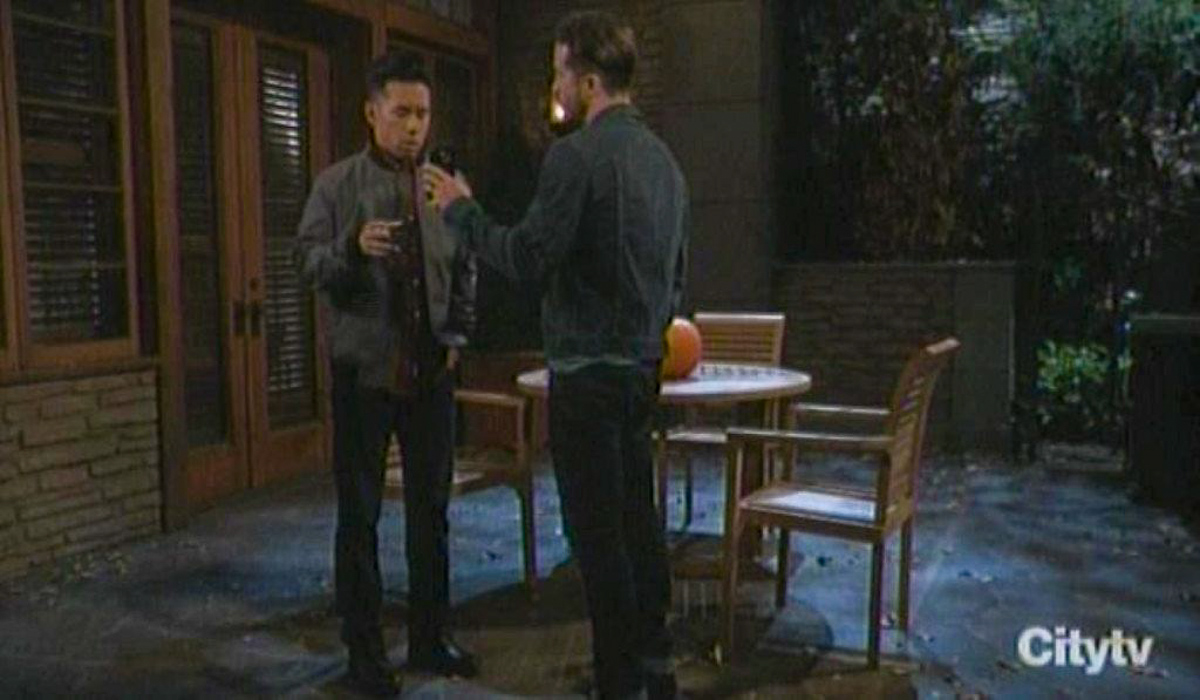 General Hospital (GH) spoilers for the week of Monday, November 4 through Friday, November 8, 2019 reveal Dr Lucas Jones (Ryan Carnes) is fed up with his husband, Brad Cooper (Parry Shen) and his secrets; and allows accusations to fly as Lucas is tired of the flat out lies and omissions of the truth from Brad.

GH sources tease that Brad’s life is just continuing to spiral as he turns to his father-in-law, Julian Jerome (William deVry), completely unaware that Julian is the one who has been planting the seeds of doubt in his own son’s mind when it comes to Brad and his secrets.

Julian has his hands full between deceiving Brad and trying to get his son, Lucas to see what Brad is all about. Julian is also coping with his sister, Ava Jerome (Maura West) and her fragile mental condition. No one believes her when she insists that Nicholas Cassadine (Marcus Coloma) is alive and just visited her at the art gallery. Julian, along with Laura Webber Collins (Genie Francis) support Ava as she checks herself into the psychiatric facility.

General Hospital spoilers show that Dr. Hamilton Finn (Michael Easton) remains conflicted on the revelation that Violet (Jophielle Love) is his and Hayden Barnes’ (Rebecca Budig) daughter. He seems very content with the sweet little girl and determined to be in her life, but as for the rest of his life, everything is in shambles. Anna Devane (Finola Hughes) is back in Port Charles, but Finn doesn’t seem ready to see her. How will Anna react when she finds out that Hayden is back and she shares an intense bond with Finn now that Violet is there and part of her fiancee, Finn’s life?

Trouble continues to haunt the Webber-Baldwin family as Franco Baldwin (Roger Howarth) has a realization. Will he finally agree to have the dangerous procedure in hopes that his memories return, or will he continue to live life as Drew Cain? Meanwhile, Elizabeth Webber-Baldwin (Rebecca Herbst) receives some devastating news. Will Franco and Liz ever be back to the loving newlyweds they are supposed to be?

General Hospital Spoilers: Laura Doubts Nikolas' Survival, Convinced He Would Reveal Himself To Her or Spencer @celebratesoaps #GH #generalhospitalhttps://t.co/3yoMSW9FQl

In other GH spoilers, Alexis Davis’ (Nancy Lee Grahn) health continues to deteriorate. Jasper “Jax” Jacks (Ingo Rademacher) will block Laura this week. Why is he so desperate to hide the fact that Nicholas is alive from his own mother? Sam McCall (Kelly Monaco) deals with Cassandra Pierce (Jessica Tuck) as her new cellmate. Sam has a lot of unanswered questions while Cassandra lives in fear. Jason Morgan (Steve Burton), by week’s end will receive a call that has scary news for the mob enforcer.

GH’s Nina Reeves (Cynthia Watros) goes to visit her brother, Nathan West’s (Ryan Paevey) grave as Charlotte Cassadine (Scarlet Fernandez) meets with her mother, Lulu Spencer (Emme Rylan) and her best friend, Maxie Jones (Kirsten Storms) for dessert. Julian will go to General Hospital, could he be there to comfort Alexis as her condition goes from bad wot owrse?

Be sure to tune into ABC’s General Hospital (GH) on Monday, November 4, 2019 to catch up on all the exciting storylines unfolding in Port Charles right now. Check Hollywood Hiccups often for updates, news, rumors and spoilers!