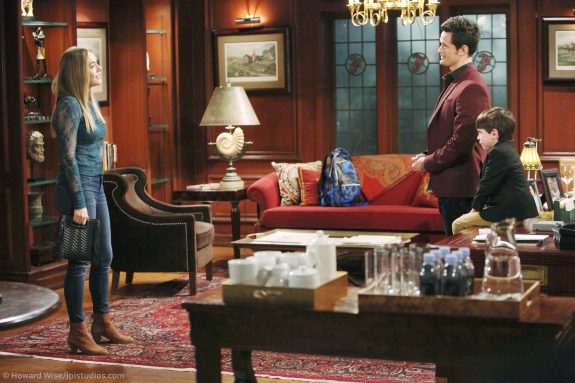 The Bold and the Beautiful spoilers reveal Hope Logan (Annika Noelle) continues going after Thomas Forrester’s (Matthew Atkinson) son. Fans have strong opinions on the storyline, but so do the actors. Noelle defended claims that her character is out for revenge.

Brooke Logan Forrester (Katherine Kelly Lang) came home one day with adoption papers for Douglas Forrester (Henry Joseph Samiri). Even though the papers listed Liam Spencer (Scott Clifton) and Hope as his adoptive parents, the plan isn’t going very smoothly. In fact, Ridge Forrester (Thorsten Kaye) is now involved, whose own marriage is on the line because of it.

Even though Thomas hasn’t signed his rights away, Hope will not give up. She has come up with a new plan.

The Bold and the Beautiful spoilers indicate that the fight over Douglas will get even more complicated. She is willing to do whatever it takes to get the adoption papers signed. Even if this could put her in danger. However, the character thinks she is doing the right thing.

The Bold and the Beautiful Spoilers: Fans Debate

The storyline has a different turn and now fans are debating over who is right. Some understand that tHope is looking out for the little boy. However, others believe that the Logan women have gone too far and Hope is actually becoming obsessed with the child.

In the latest issue of Soap Opera Digest, Annika Noelle was asked questions regarding the custody battle. Even though many think revenge is a large part of the motivations, the actress insists that Hope is just trying to protect Douglas.

“Hope can’t stand to see the negative impact Thomas’ behavior is having on Douglas’ life. Her main concern is not payback, it’s the child’s well-being. That’s of the utmost importance right now.”

B&B spoilers reveal that Noelle also noted that Douglas is having tummy aches because of Thomas. She mentioned that it is very upsetting to see the little boy have stress-related symptoms over his father.

What do you think of what the actress had to say? Do you believe that Hope is going too far? Should she be more careful about her plan for Thomas? Where does this leave Douglas in the end?