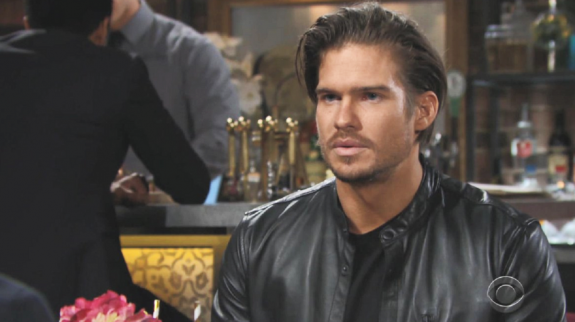 First on the weekly preview, we see that at the Abbott house, Theo Vanderway (Tyler Johnson) meets his birth grandmother, Dina Mergeron (Marla Adams). As they sit on the couch and chat, with Dina sipping tea, she asks him did he say “Vanderway”? As The Young and The Restless viewers know, Jack and Traci Abbott (Peter Bergman, Beth Maitland) while doing research for their Abbott Family book, found out Dina had a love child in high school with Stuart Brooks (Robert Colbert). They found an adoption decree of a baby boy named Eric Vanderway (Jon Briddell) and canceled checks for his care written by Dina over the years. Jack then asked Theo about a DNA test, which he agreed too, and now it has revealed that Theo is Dina’s grandson and Jack and Traci’s nephew, as well as Kyle Abbott’s (Michael Mealor) cousin!

Next up on the preview video, we see that at Society, Kyle sees Tessa Porter (Cait Fairbanks) blindfolded in a purple blindfold and wearing earphones; he asks Mariah Copeland (Camryn Grimes) if Tessa is all right! Mariah tells Kyle yeah, she’s fine; Tessa doesn’t know it yet but she’s about an hour away from having her mind blown! It is Mariah and Tessa’s first anniversary, and this has something to do with Mariah’s anniversary surprise for Tessa.

The Young and the Restless News: Bryton James Harassed Over Daniel Goddard Exit On Social Media

Next, the scene shifts to The Grand Phoenix, Simon Black (Jeffrey Vincent Parise), who appears to be a loan shark that Calvin Boudreau (John Burke) owed money to, threatens his widow, Chelsea Boudreau (Melissa Claire Egan). The increasingly menacing Simon Black tells her she only has twenty-four hours to give him back the money that her dearly departed husband owes him! He will go on to threaten her son Connor Newman (Judah Mackey) as well, for which Chelsea will say Simon Black is going to burn! Simon Black seems to be a charming man at first sight, but the more one gets to know him, the more one sees exactly how dangerous he is! He is a monster indeed, if he will even threaten harm to a child over money owed to him!

Young And The Restless Spoilers: Abby Newman Is Concerned But Nosy Regarding Chelsea Boudreau

Finally, still at The Grand Phoenix, Chelsea has approached Abby Newman (Melissa Ordway) about buying out her part of The Grand Phoenix. Abby can tell there’s something going on out of the ordinary, and tells Chelsea that she hopes that trouble is not brewing. Chelsea decides Abby is asking too many questions, and tells her to let her handle the situation on her own, putting a smile on her face and trying to hide her fear from Abby.