Young And The Restless Spoilers: Theo Tells Dina All About His Father 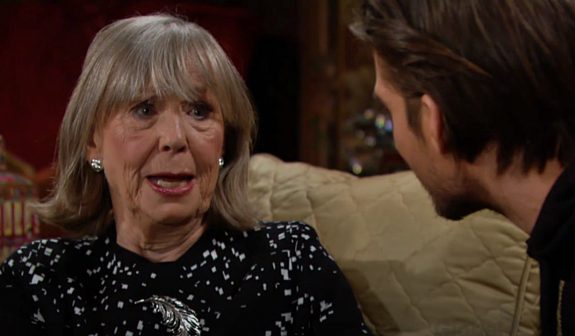 Theo got to meet his birth grandmother for the first time earlier in the week, as Y & R viewers will recall, and she thought he was his father, Eric, who had died when Theo was in high school so he humored her and pretended to be his father. But she got tired out after not very long of a visit, so they cut it short; but since an actor has been cast to play Eric (Jon Briddell) it stands to reason that he may appear in flashbacks, which implies that Theo may tell Dina, and possibly Jack Abbott (Peter Bergman) also as much about his father as he knows, and Eric’s life will likely be played out in flashbacks.

The Young and the Restless Spoilers: Daniel Goddard Gutted – Unsure About Next Career Move

Theo is still a little bit in shock about being Kyle Abbott’s (Michael Mealor) cousin, or at least half-cousin on Dina’s side. He remains amazed how the two of them met and became good friends in New York and that now he has found out they are cousins, he feels like it was fate that brought them together back then! Kyle, however, doesn’t agree and doesn’t trust him and Jack tells him to play nice since Theo has been proven to be part of the family and will be treated as such!

Theo wants all his newfound family members to know all about his dad, since as he has said, Eric died when he was in high school so there is no way for them to get to know him. Y & R viewers can expect that there will be a lot of memories that Theo will share, and that will likely be played out in flashbacks of different things that happened in Eric’s life. Theo may have some family mementoes or photographs that he can share, and that may be invaluable research for that chapter of the Abbott family book that Jack and Traci Abbott (Beth Maitland) are working on.

Kyle has a tough time welcoming Theo into the family while Chelsea protects her loved ones this week on #YR. You won’t want to miss it! pic.twitter.com/JhzQmeWpEt

It is certain that Jack will let Theo see the documents that were found about baby Eric Vanderway, the decree of adoption, the letters between the teenage Dina and Stuart Brooks (Robert Colbert) and also Theo has some new aunts on the Brooks side that he undoubtedly will want to know about as well, and they may want to get to know him also; he has a birth grandfather who unfortunately he will never meet, but at least the Brooks girls are all still alive, which implies there may be cousins as well. If Theo ever felt he was alone in this world, from now on he certainly will know he is not!