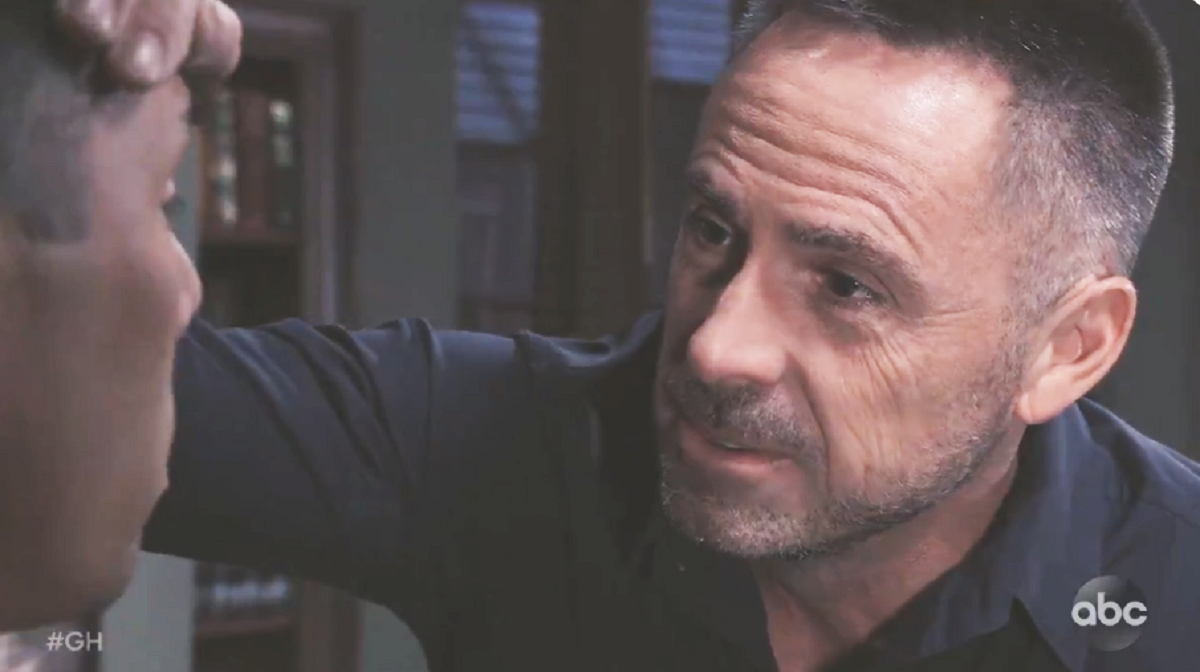 Jordan Ashford (Briana Nicole Henry) and Curtis Ashford (Donnell Turner) join them. Curtis can’t believe Nina is back with Valentin. Nina defends Valentin to Curtis and Jordan. Curtis promises to always be there for Nina when Valentin gets his due. Curtis wants to pick up test results.

Jordan is convinced these tests will prove that Sasha is not Nina’s daughter. Nina agrees to reunite with Liesl as a family. Nina goes to the restroom. Liesl warns Valentin what the test results could be. Liesl tells Valentin he may not be in the clear. Nina watches Valentin and Liesl’s conversation.

General Hospital’s Sasha Gilmore (Sofia Mattsson) and Michael Corinthos (Chad Duell) leave the party. Sasha thanks Michael for giving her life back. Michael and Sasha toast to whatever is next. Michael wants Sasha to stay in Port Charles and make a life there.

Liesl Obrecht (Kathleen Gati) approaches and asks Sasha what she told Nina about her. Sasha covered for Liesl. Liesl tells Sasha about the test that Hamilton Finn (Michael Easton) ran at the hospital. Michael offers Sasha a job but she refuses. Michael offers to gets Carly to give Sasha a job. Sasha doesn’t want to work for Lucy Coe (Lynn Herring). Michael tells Sasha she has bargaining power with Lucy. Sasha wants a simple life.

General Hospital’s Carly Corinthos (Laura Wright) and Sonny Corinthos (Maurice Benard) are ready to call it a night but Lucas Jones (Ryan Carnes) and Brad Cooper (Parry Shen) are still there. Brad and Lucas fight on the terrace. Lucas accuses Brad of cheating on him. Carly wants to go outside, Sonny talks her out of it. Julian texts back and Lucas reads the message. Brad tries to convince Lucas he would never cheat on him. Liesl texts Brad and he refuses to let Lucas see it.

Lucas tells Brad to leave, he can’t deal with him anymore tonight. Brad leaves. Brad goes straight to Julian for help. Julian reveals that he is behind the mess between Brad and Lucas. Brad demands to know why Julian is doing this to him. Lucas talks to Carly about everything that has happened the past year. Julian claims to be trying to help Lucas. Julian tells Brad he is leaving town with his imaginary lover. Carly invites Lucas to spend the night. Brad doesn’t want to leave Wiley. Julian tries to force Brad to leave town.

Sonny wonders if Ava should be allowed around Avery Corinthos (Ava and Grace Scarola) in this state of mind. Laura asks Sonny not to use this situation to take Avery away from Ava. Sonny wants to know when Laura joined team Ava. Laura feels for Ava because of everything she’s been through. Sonny won’t say for sure he won’t go for custody.

General Hospital’s Nikolas Cassadine (Marcus Coloma) wants to know who enlisted his mother in his search. Jasper Jack (Ingo Rademacher) and Hayden Barnes (Rebecca Budig) tell him Laura believes Spencer Cassadine (Nicholas Bechtel) is behind this. Nikolas wants to protect Laura and Spencer. Hayden wants Nik to go back to where he was supposed to stay. Jax reveals how he and Nik came to be partners. Nik explains that Ava passed out. Jax explains that Ava is in Shadybrook. Nik says they are safe. Nik says Ava betrayed him and deserves what she gets.

A flashback shows Nik revealing the truth about the codicil. Jax wants Spencer to have what he is entitled to. Nik promised Jax a shipping division for his trouble. Nik promises to deal with the divorce when the time comes. Nik wants to stay in Port Charles. Jax never agreed to hide him. Nik uses Spencer and Nina to get his way. Nik pushes everyone to continue to help him.

General Hospital’s Liesl Obrecht (Kathleen Gati) speaks to Maxie Jones (Kirsten Storms) about her lack of contact with her son. Maxie has forgiven her for worse. Maxie invites Liesl to visit the baby tomorrow. Liesl goes to the Metrocourt and approaches Nina and Valentin. Nina tells Liesl she believes her. Liesl wants to be close to Nina again. Maxie gets in Peter August’s (Wes Ramsey) face about his phone. Peter hoped to have another surprise for Maxie. Peter had put in a bid for the apartment. Peter gets a text from Lucy. Peter doesn’t get the property he wanted. Maxie is fine with it. Maxie asks Peter to move in with her.

Of course, fans will have to tune in to General Hospital on the ABC network to find out what will happen next!