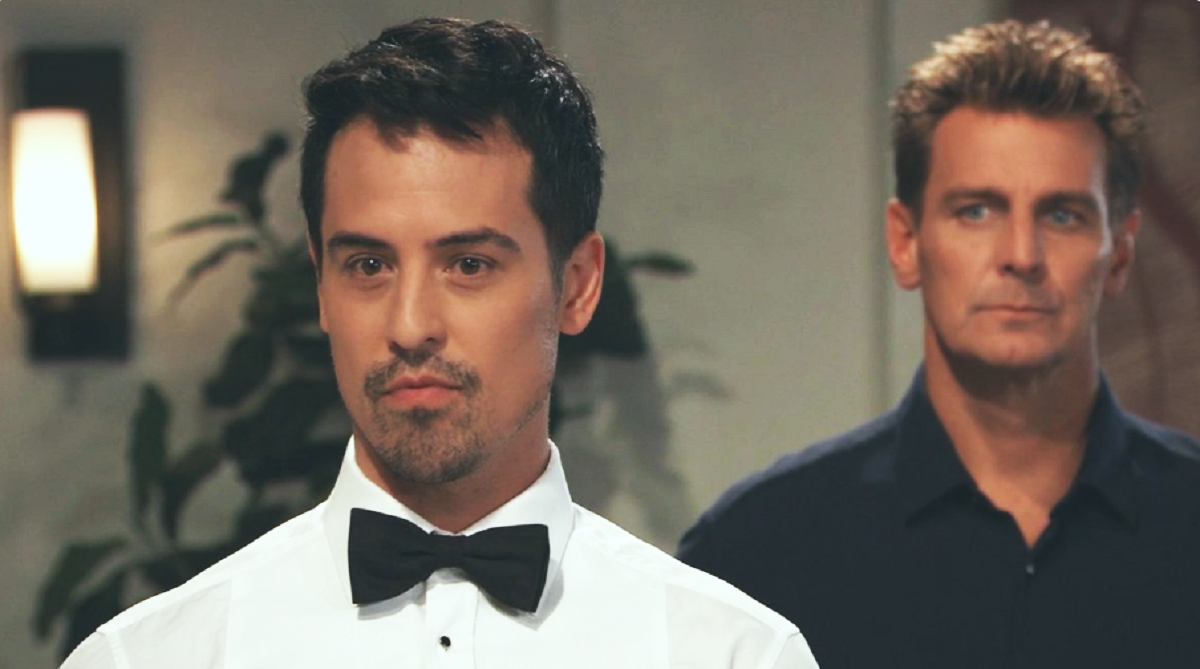 General Hospital (GH) spoilers for Tuesday, November 5, tease that Lucas Jones (Ryan Carnes) will remain stuck in turmoil. He’s reeling since he believes Brad Cooper (Parry Shen) has been having an affair, but he’ll manage to crack a smile anyway. Lucas will tell someone that what doesn’t kill us makes us stronger. He’ll try to put on a brave face while his family’s on the verge of falling apart.

Naturally, Brad won’t just sit back and let his life be destroyed. He’ll try to tell Julian Jerome (William deVry) that this is a mistake, but Julian will stick to his guns. Since Julian views Brad as a threat to Lucas’ happiness with “Wiley Cooper-Jones” (Erik and Theo Olson), he’ll be adamant that Brad needs to end his marriage and leave town. Julian will argue that it’ll be like Brad never even existed.

General Hospital spoilers say Brad will decide to get the upper hand instead. He’ll find Lucas and expose Julian’s blackmail plot, which will spark another grilling session. Brad will be taking a huge risk here, but it’s better than walking away. At least Brad will have a fighting chance to make this relationship work.

Over with Josslyn Jacks (Eden McCoy), she’ll face consequences for her poor choices. Joss got drunk at the Halloween bash, so she’ll have to take whatever’s dished out. That includes what the school settles on as well as Carly Corinthos’ (Laura Wright) punishment.

Other GH spoilers state that Kim Nero (Tamara Braun) will hope for closure. It doesn’t sound like she’ll expect to truly work through her issues with “Drew Cain” aka Franco Baldwin (Roger Howarth). However, Kim could at least work through her own. She’ll admit to needing help, so maybe this is a step in the right direction.

At Elizabeth Baldwin’s (Rebecca Herbst) place, she’ll get a visit from “Drew.” Liz insisted “Drew” should say goodbye to her family before leaving Port Charles. Cameron Webber (William Lipton) will guess that’s what “Drew” came by to do. Of course, “Drew” previously talked to Kim about sticking around after all. He’ll reach some sort of conclusion on Tuesday, so whatever it involves could solidify his decision to stay.

General Hospital Spoilers – Failure Is Not An Option For Nikolas Cassadine

Next, Nikolas Cassadine (Marcus Coloma) will have another chat with Jasper “Jax” Jacks (Ingo Rademacher). He’ll assure Jax that he’s back to take what was stolen from him. General Hospital spoilers say failure just isn’t an option for Nikolas, so he’ll count on Jax and Hayden Barnes (Rebecca Budig) to do their part.

Finally, Ava Jerome (Maura West) will awaken to a noise at Shadybrook. She’ll jolt up in bed as she tries to figure out what’s going on. It looks like Ava will get an unexpected visitor, so the bombs will keep dropping. We’ll give you updates as other GH news and rumors emerge.