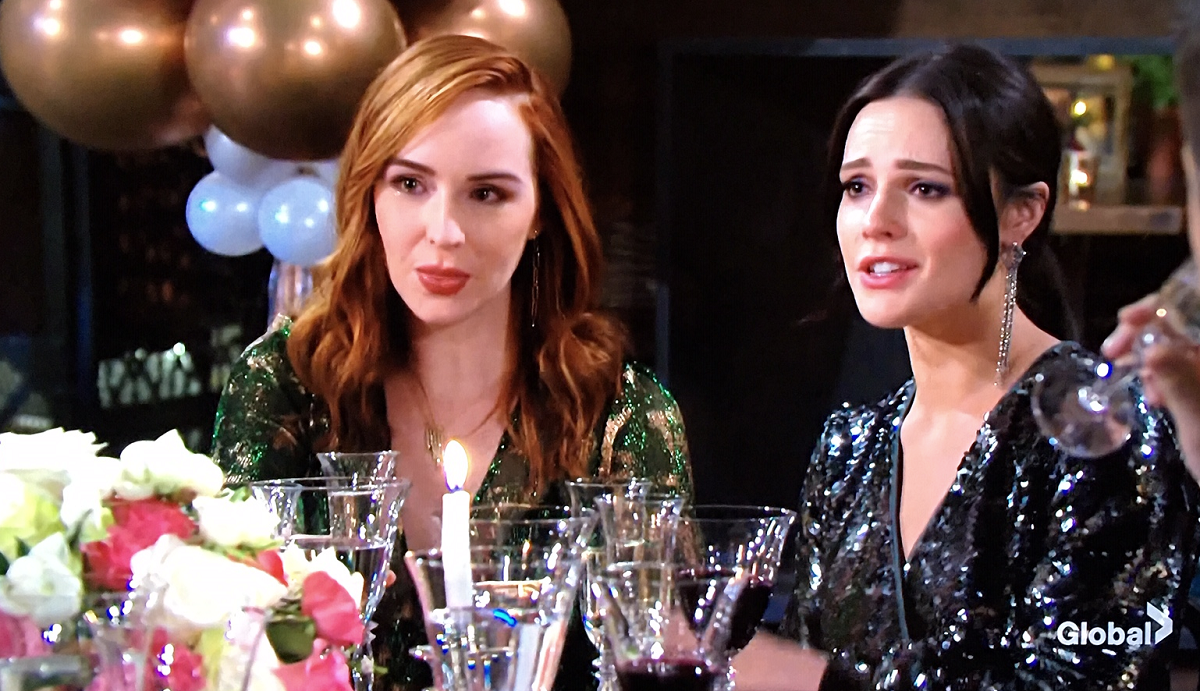 The Young and the Restless spoilers for Tuesday, November 5, tease that Mariah Copeland (Camryn Grimes) will remind Sharon Newman (Sharon Case) about the anniversary party later tonight for her and Tessa Porter (Cait Fairbanks). Sharon will be sure that Tessa will love the evening.

Meanwhile, at The Grand Phoenix, Jack Abbott (Peter Bergman) will talk via phone with Kyle Abbott (Michael Mealor). Kyle will want Jack to do some digging and find out who Theo Vanderway (Tyler Johnson) really is. Jack will remind Kyle that Theo is family, and that his history with Kyle is clouding his judgment. Kyle will hope that he doesn’t later have to tell his dad that he told him so.

Across the room, Chelsea Lawson (Melissa Claire Egan) will inquire about Simon Black (Jeffrey Vincent Parise) to Abby Newman (Melissa Ordway), then Nick Newman (Joshua Morrow) will appear and she’ll say that she was just curious about their important client. Jack and Nick will then discuss Adam Newman (Mark Grossman), and Nick will opine that Adam will probably try to play on Chelsea’s emotions via Connor Newman (Judah Mackey) but that he’ll fail.

Next on Y&R, at Adam’s penthouse, he’ll hear Connor yell from upstairs. He’ll go up and end up consoling Connor, who had a bad dream. Adam will call Chelsea.

Back at The Grand Phoenix, Chelsea will tell Nick that she’s got to go because of something with Connor. Jack and Nick will talk about Nick’s campaign and about the downside of having the Newman name, but Jack will think that Nick will prove he’s his own man. Phyllis Summers (Michelle Stafford) will overhear the exchange and clap slowly.

She’ll say that she loves watching her two ex-husbands making things happen in her hotel. Jack will leave and Nick will ask Phyllis why she isn’t happy about his running for office. Phyllis will say that she’s worried that politics will change him, and that after a lifetime of blazing his own trail, it might be politics that turns him into his father.

Next on Y&R, Tessa will be confused as Mariah brings her into Society – which is empty – and has her put on a blindfold and headphones. After she does, Lola Abbott (Sasha Calle) and Kyle will arrive. Later, Sharon and Abby will arrive, and the surprise party will begin with Tessa coming out to the surprise party. They’ll have some toasts and have a great time. Later, once everyone has gone, Tessa and Mariah will slow dance and talk before heading home.

Next on Y&R, at Adam’s penthouse, Connor will be glad to see Chelsea and she’ll get him calmed down and back to bed. Adam will remark that she and Connor need each other, and she’ll wonder what caused Connor’s nightmare. She’ll teach Adam a technique to help calm Connor down before she leaves. Later, Connor will tell Adam that he likes it when his mom is there. Adam will agree – he does too.

Back at The Grand Phoenix, Nick will tell Phyllis that he’s not going to turn into his father. They’ll hug just as Abby arrives and she’ll get an eyeful. Afterwards, Abby will go over to Phyllis and tell her not to even think about it. Phyllis will balk then indicate that she just might.

Young And The Restless Spoilers – Did Connor Newman Pull A Fast One?

At Crimson Lights, Sharon will chat with Rey Rosales (Jordi Vilasuso) about Mariah and Tessa, then she’ll talk about her own life. Rey will be happy to hear that she is close to getting her degree and he’ll say that he wants to work toward better things. They’ll end up dancing.

Finally, on Tuesday’s new episode of Y&R, Chelsea will return to Nick’s house. She’ll wonder if Connor pulled a fast one by getting her over to Adam’s after his nightmare. Nick will wonder if it’s coming from Connor or from Adam.